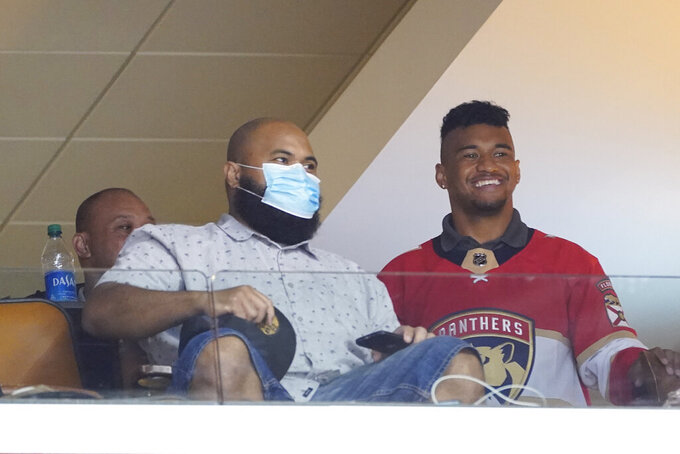 Left unsaid was how Flores would feel about coaching Deshaun Watson instead.

The Dolphins are widely expected to pursue Watson, the Houston Texans' disgruntled two-time Pro Bowl quarterback, if he becomes available this spring. Watson has requested a trade but is not yet on the market, and competition for him would be stiff.

And so, when asked about the Watson speculation, Flores said he remains all in on Tagovailoa.

“I'm excited to work with Tua,” Flores said. "That’s where my interests are. He's a talented player, and we here believe in developing players.

“Tua and I had lunch yesterday — a lot of that development is about building relationships. He's confident; I'm confident in him.”

Tagovailoa has said his rookie season wasn't up to his standards after Miami made him the No. 5 overall pick in the 2020 draft. Coming off major hip surgery, he started nine games and ranked 30th in the NFL in yards per attempt as Miami went 10-6 but missed the playoffs.

“We threw him in the fire there,” Flores said. “I'm excited about that year-one to year-two jump, and him being more comfortable. An offseason is really going to be helpful to him.”

Flores said Tagovailoa's development was a factor in the choice of replacements for offensive coordinator Chan Gailey, who departed after one season. Eric Studesville and George Godsey were promoted as co-coordinators from other positions on the staff.

“Continuity was a big thing for me in making that decision,” Flores said. “I wanted that for Tua and a lot of young players we had offensively.”

Flores said he hasn't decided how play-calling will be handled.

While Tagovailoa is the No. 1 QB for now, Miami will be shopping for a backup when free agency begins next week. Ryan Fitzpatrick will be a free agent after going 9-11 as a starter for the Dolphins in 2019-20, and they'll likely seek a cheaper option.

“We'd love to have him back," Flores said, “but this is a unique year from a cap standpoint.”

The Dolphins, who have about $33 million in salary cap space, are also in the market for a running back, receiver, center and pass rusher.

“I’m going to be playing the song, ‘You cant always get what you want,’ on day one of free agency," Flores said. "We may get priced out on some guys we'd like to have; they may just want to go elsewhere. We’re going to try to do the best we can.”