Analysis: 7 teams who have let fans down bigtime in 2021 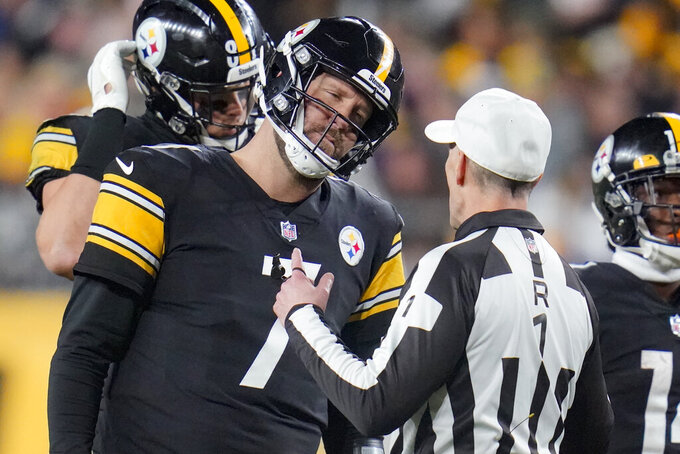 Pittsburgh Steelers quarterback Ben Roethlisberger (7) talks with an official during the second half of an NFL football game against the Baltimore Ravens, Sunday, Dec. 5, 2021, in Pittsburgh. (AP Photo/Gene J. Puskar)

A year ago, the Seahawks and Steelers were heading toward the playoffs. So were the Saints, Browns and Bears.

Now? Well, even if any of them stumbles into the postseason, the likelihood of doing any damage there is slim.

Those five teams have been particular disappointments in 2021, and they're joined by the experienced Vikings, who have more talent than they've displayed, and the Panthers, whose 3-0 start to the schedule has been blurred by their mediocrity and even ineptitude since.

"It’s all about trying to keep it together throughout whatever you are up against,” Seahawks coach Pete Carroll says.

Here's a look at where things have gone wrong for each:

Life without Drew Brees didn't figure to be a Big Easy, but at least the Saints were prepared for not having him. The Michael Thomas saga has been especially disruptive and robbed whichever starting quarterback — Jameis Winston, now injured; Taysom Hill; Trevor Siemian — of the only viable receiving weapon. Losing do-everything running back Alvin Kamara also has been problematic.

The Saints are on a five-game slide that is their worst since Sean Payton became coach in 2006. Payton seems more annoyed at his defense.

“Just put the tape on,” Payton said. “I don’t think the effort’s where it needs to be, either, just watching the big plays.

At 70, Pete Carroll is the NFL's oldest coach. The always-enthusiastic Carroll probably is feeling that old watching his broken offense with no running game, a weak line, and an inconsistent Russell Wilson at quarterback.

At least the defense has improved recently under Ken Norton. Now the heat is on offensive coordinator Shane Waldron.

Injuries at running back, and to Wilson, have been damaging, but the spirit usually evident with Carroll teams has lagged.

Some believe this is the AFC North's most talented team. So why are the Browns so mediocre?

Start with the passing game, which struggled when it had Odell Beckham Jr., and after he forced a trade. With Jarvis Landry, Kareem Hunt and solid tight ends, Cleveland should be a force with the ball. When it's using the ground game, it often is. But Baker Mayfield's up-and-down performances have stymied the air attack.

Edge rusher Myles Garrett has been terrific, but there haven't been enough defensive playmakers to support him.

As their Thursday night loss to Minnesota displayed, the Steelers can't win in the trenches. So uncharacteristic for this franchise, too.

Pittsburgh ranked 29th running the ball and 27th passing it through 13 weeks. A rebuild of the offensive line hasn't worked, and the defense has been damaged by injuries or illness for key performers such as T.J. Watt and Minkah Fitzpatrick.

The Steelers have a knack for comebacks in games, but the way they fall deep into a hole early on has made them an also-ran.

The value of running back Christian McCaffrey was emphasized this season. He was available for the 3-0 start and hardly ever on the field after that. When Sam Darnold went from promising in those wins to flopping, getting hurt — and then being replaced by free agent Cam Newton returning to Charlotte — the Panthers plummeted.

Carolina has gotten virtually nothing from the draft, too, with top pick CB Jaycee Horn injured early.

A team that loaded up on the D-line to stop the run has been a sieve. Injuries have hurt, but they were 31st in the league with an average of 4.72 rushing yards allowed per game going into the win over Pittsburgh.

Injuries have been very significant here, losing DE Danielle Hunter (pectoral) for the season, not having top draft pick LT Christian Darrisaw all year, and some COVID-19 issues.

Plus, the way Minnesota has folded late in games is a very troubling trend, offsetting the talent base of WRs Justin Jefferson and Adam Thielen, RBs Dalvin Cook and Alexander Mattison, and QB Kirk Cousins.

“I think we’ve shown potential, but you’ve got to do it not only for four quarters, but for really four more games,” Cousins says. "We’ve got to keep getting to work, and not really talk about it, but be about it.”

With coach Matt Nagy on the precipice all season, the Bears needed to be ultra-stingy on defense as the offense — particularly when first-round draft pick Justin Fields took over at quarterback — tried to find its way. But the offense has been lost, with Chicago ranking 30th in scoring and with a minus-8 turnover margin.

The idea in the Windy City is for management to build a team competitive against Green Bay. Other than linebacker Roquan Smith, taken eighth overall in 2018, recent drafts have been a bust. No one can judge Fields yet, of course, but the previous work by general manager Ryan Pace puts his (and Nagy's) job in jeopardy.

Oh yeah, the Bears are 1-6 against the Packers under Nagy.