Analysis: Behind health, stability a key to NFL success 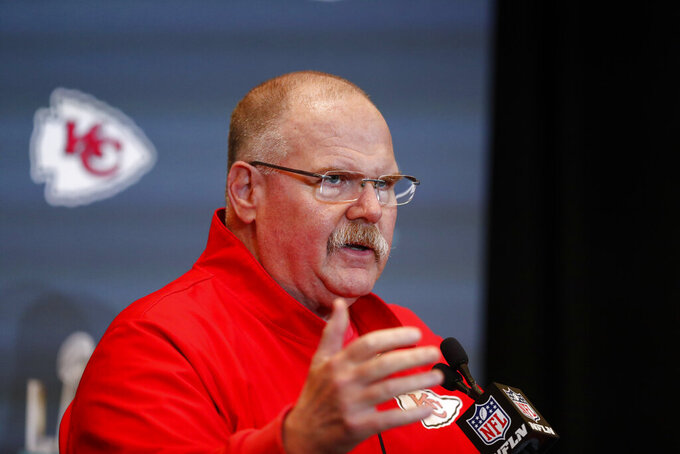 Chiefs, 49ers, Saints, Ravens. All powerhouses last season. All in excellent position to be so again if the NFL actually gets to play during the coronavirus pandemic.

Anyone who believes continuity isn’t an essential part of pro football success will need to re-examine that philosophy.

As NFL teams finally get together after an offseason of virtual, well, everything, the rosters featuring stability, and coaching staffs remaining intact, will provide a huge advantage.

No one is crowning any of those four teams Super Bowl champion just yet. But there can be no argument that the continuity of roster and staff in Kansas City, San Francisco, New Orleans and Baltimore — all division winners with a combined record of 52-12 — gives them a huge edge heading into the 2020 schedule, whenever it gets rolling.

“John (Harbaugh) has done a great job with the schedule and us doing everything from home, and meetings haven’t changed. We were talking the other day as a defensive staff, and if you just took the transcripts from OTAs last year, and then our Zoom meetings this year, you couldn’t tell the difference. Because we’ve made Zoom meetings an event that our guys didn’t want to miss them, and they took something away from them.”

The main issue for so many teams is going to be what has been taken away from them. The Patriots minus Tom Brady tops the list, but New England also lost some other key players, particularly on defense (Kyle Van Noy, Jamie Collins) and placekicker Stephen Gostkowski.

Another veteran quarterback with a long string of starts, Philip Rivers, departed the Chargers, as did Melvin Gordon, Brandon Mebane, Thomas Davis and Michael Schofield.

Plenty of other teams have had roster upheavals, and those hoping for instant impact from their rookie class instead might be re-evaluating how much they want to depend on those kids.

Yes, top overall draft pick Joe Burrow will start in Cincinnati, but going to the NFL's worst team with no chance to truly get indoctrinated before the games become real is a huge disadvantage.

And how much continuity can the Raiders have as they change home cities, stadium, workout facility and, in some ways, lifestyle in the move to Las Vegas?

Simply put, talent might not be the deciding factor for NFL franchises this season. Health, naturally, will be the first determinant across the board — and there's never been anything more unpredictable for pro football players than to deal with the coronavirus.

Should a team be fortunate to keep its key performers on the field — expecting everyone to remain healthy probably is wishful thinking along the lines of what the folks in New England were doing before Brady opted to bolt to Tampa — that still isn't necessarily enough if they don't work well together.

The Browns, Bucs, Cardinals, Bills and Broncos appear to have significantly improved their rosters. Yet those important newcomers could need extra long adjustments this season.

Sure, DeAndre Hopkins, possibly the best offseason acquisition by any team, worked out with his new quarterback, Arizona's Kyler Murray, this summer.

All well and good, football-wise. That's nothing like what the perennial All-Pro receiver and the 2019 Offensive Rookie of the Year Murray will face when they open up against Richard Sherman and the 49ers, whose defense meshed on the way to the NFC title last year.

Could D-Hop and Kyler have used a preseason contest or two to work out the kinks? Certainly — in a normal year and environment. Now, dropping those exhibition games was an exhibit of wise caution no matter how disruptive to preparation and cohesiveness it is.

Most challenging of all are the places where coaching changes were made. Mike McCarthy is a Super Bowl winner, Ron Rivera has been to the big game as a head coach. They are two of the top men at their jobs in the 2000s.

Yet McCarthy in Dallas and Rivera in Washington, as much of an upgrade as they might be in usual years, could be navigating some roiling waters trying to get their systems in place.

Even more daunting are what Kevin Stefanski in Cleveland, Matt Rhule in Carolina and Joe Judge with the Giants face. None has been a head coach in the NFL, and all of them join clubs whose underachievements have been their calling cards recently.

“You used to be able to have 60 days to get the job done, and everybody in our league will probably have more like 30 days, so I’m really focusing on maximizing the time and the meeting time and the most important things we need to get done when we get back together,” McCarthy said. “Having the unknown out there causes more work on the preparation side.”

And a lot less continuity.