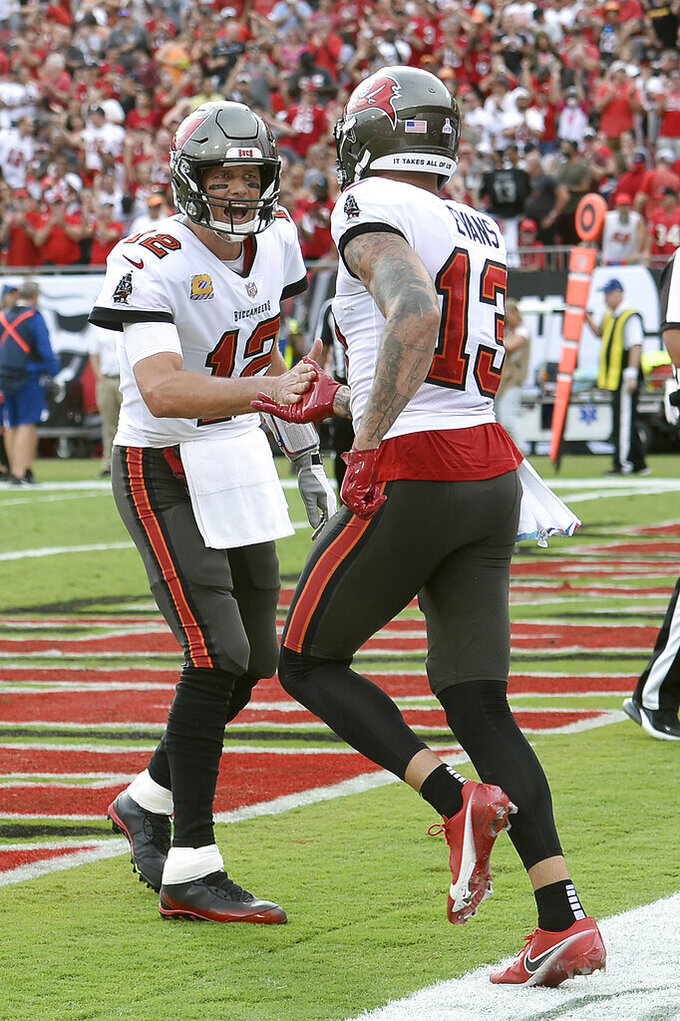 Brady became the first player to throw 600 career touchdown passes and then tacked on two more in Tampa Bay’s 38-3 rout over Chicago on Sunday.

“Yeah, the numbers, they’re staggering and they’ll probably never be broken,” Buccaneers coach Bruce Arians said. “I say that, but who knows when the next Tom Brady is going to come. They are staggering, but when you watch him practice every single day, you don’t see the age.”

Brady is on pace to throw a career-best 51 TD passes this season as the defending champions (6-1) aim for a repeat. Even if he called it quits now, 602 seems quite safe.

Consider this: Aaron Rodgers is fifth on the all-time list and trails Brady by 175 TD passes. Rodgers, who turns 38 on Dec. 2, would have to average 35 TD passes per season for five more years after Brady retires to catch him. Ben Roethlisberger (403), Matt Ryan (359) and Matthew Stafford (301) round out the top five among the active QBs. They have no chance.

Russell Wilson is next on the active list with 277 TD passes. He’s injured and turns 33 on Nov. 29. Wilson averaged 30 TD passes over his first nine seasons. That wouldn’t cut it. He would need to throw 36 per season for nine more years once Brady hangs up his cleats to surpass him.

Patrick Mahomes is way behind with 132 TD passes, but he has been so prolific that he could potentially challenge the record if he stays healthy and keeps playing for at least another decade. The 26-year-old Mahomes averaged 38 TD passes his first three seasons as a starter and is on pace to throw 44 this year despite his recent turnover struggles. Mahomes would need to average 38 TDs for 12 1/2 more years once Brady is finished playing.

With passing numbers on the rise across the NFL and an extra game added to the regular season, it’s realistic to think single-season records will be broken whether it’s Peyton Manning’s mark of 5,477 yards or his 55 TDs.

But topping Brady’s career numbers requires longevity and sustained excellence. Brady’s accomplishments are unprecedented in team sports. His teammates throughout his 22 years deserve plenty of credit. Arians made sure to spread some praise around.

“I doubt seriously that there will be another team like the one he was on for all those years and the one he’s on now because he has a bunch of individual records in a team sport,” Arians said, referring to Brady winning six Super Bowl titles with Bill Belichick and the New England Patriots. “I always harp about it, it’s not just Tom, there’s 10 other guys out there with him and 11 on defense. That defense he had in New England and the defense he’s got here has helped him win a bunch of games — those guys up front keeping him clean.”

Brady doesn’t miss a chance to credit his teammates.

“There’s nothing about this sport that you do by yourself,” Brady said. “It’s the ultimate team sport. It challenges you physically, mentally, emotionally, every week, every day of practice. This is not a sport you can just go out there and mail it in. It takes 100% of what you have every single day to go out there and be successful. I’m just grateful to have amazing teammates, coaches. To be able to do it for as long as I have is really an incredible blessing in my life.”

Brady set another record Sunday by simply showing up to face the Bears and 22-year-old rookie Justin Fields, making it the largest age gap between starting quarterbacks.

Fields, the 11th overall pick in the NFL draft, had a miserable day. He threw three interceptions and fumbled three times, losing two.

Meanwhile, Brady tossed four TD passes on a day he wasn’t particularly sharp. He tied a career high with six consecutive incomplete passes at one point right after connecting with Mike Evans for No. 600.

“There’s a lot of room to improve on what we’re doing, so we’re just going to keep trying to get better,” Brady said.

It’s that mindset of never being satisfied, not even after a 35-point victory, that separates Brady from everyone else.

He’s done it all and he’s not done doing more.