Analysis: NFL gets schedule right from the outset 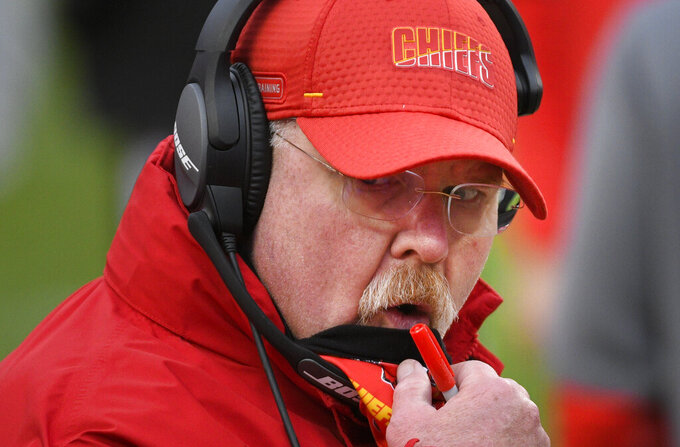 FILE - In this Jan. 17, 2021, file photo, Kansas City Chiefs head coach Andy Reid watches from the sideline during an NFL divisional round playoff football game against the Cleveland Browns in Kansas City, Mo. Putting together the NFL schedule might be as complex as space travel. All 32 teams have preferences, there are stadium and city issues to deal with, bye weeks to consider and, most importantly, attempting to avoid competitive imbalances. The two Week 1 highlight matchups have Cleveland at Kansas City and Pittsburgh at Buffalo, all potential powers in the AFC. (AP Photo/Reed Hoffmann, File)

Putting together the NFL schedule might be as complex as space travel. All 32 teams have preferences, there are stadium and city issues to deal with, bye weeks to consider and, most importantly, attempting to avoid competitive imbalances.

That final challenge is unavoidable in some instances because weather makes for a competitive edge. Early in the schedule, teams who call Florida home have an advantage. So do those who play in outdoor facilities in frigid metropolises late in the season.

For 2020 and 2021, there also has been the added concern of COVID-19 and its impact throughout the league. It's entirely possible that local government ordinances will affect who and how many people can attend games this season, just as it did a year ago.

As the schedule stands now, though, the NFL has scored a lot of touchdowns. From the outset.

The two Week 1 highlight matchups have Cleveland at Kansas City and Pittsburgh at Buffalo, all potential powers in the AFC.

“It’s the first game. It’s one of 17. It’s as important as the rest of them. It’s just, it’s happening now," Chiefs coach Andy Reid says. "There’s nothing before this that’s gotten you to this point, so there’s unknowns. If you’re on the offensive side of the ball, what’s the defense going to do? If you’re on the defensive side, what’s the offense going to do? What are the new looks on special teams that they’re going to throw at you?

"So, there’s a little bit more unknown than you would have as you get through the third and fourth game of the season. That’s the part I get excited about, gets your juices going. Plus, you get to start the season, that’s always exciting. Here we get to start it at home, which is great, against a very good football team.”

Those two games shouldn't overshadow some other intriguing contests: Seattle at Indianapolis, both playoff teams in 2020; the likely rising Chargers at Washington in a meeting of two very solid defenses; Miami at New England in a key early AFC East match; Green Bay facing New Orleans at Jacksonville following damage to the Big Easy from Hurricane Ida; and for those who like to wallow in incompetence — many NFL fans see the glass much more half-empty than half-filled — 2020 tail-ender Jacksonville and predicted '21 bottom occupant Houston.

Bills at Dolphins. Yet another September trendsetter in the AFC East.

Rams at Colts. Both with new quarterbacks ( Matthew Stafford in LA, Carson Wentz in Indy).

Raiders at Steelers. A classic rivalry that often gets intense, even dirty.

Colts at Titans. With early leadership in the AFC South on the line.

Saints at Patriots. A possible statement game for both sides.

Buccaneers at Rams. Many prognosticators see this as a precursor of the NFC title game.

Packers at 49ers. And some see this as a possible such matchup in January.

Buccaneers at Patriots. No other game on the entire schedule will get more attention, hype, outrageous evaluations and social media hysteria than Tom Brady heading back to where he led New England to six Super Bowl championships. NBC must already be salivating over this one.

Bills at Chiefs. Another prime-timer, on Sunday night in a rematch of the AFC title game of the 2020 season.

Colts at Ravens. Finishing off a hat trick of strong night games.

Chargers at Ravens. If LA is the contender many believe it will be, this should show the Bolts' merit.

Seahawks at Steelers. Will any defenses be more physical than these two?

Chiefs at Titans. No reason to think this outcome won't play into playoff seeding down the road.

Saints at Seahawks. Seattle doesn't get many breaks in its challenging schedule.

Bengals at Jets. Say what? How about a look at the progress of Joe Burrow and Zach Wilson?

Steelers at Browns. The dislike (hatred?) on each side is increased if both are playoff chasers.

Buccaneers at Saints. The only teams expected to contend in the NFC South, and the Saints have bitter memories from last season's postseason meeting.

Whew. Halfway through the schedule and not even close to running out of compelling contests.

Bears at Steelers. Will Justin Fields be at quarterback for Chicago, as the team's fans already are demanding?

Texans at Dolphins. Will Houston have won yet?