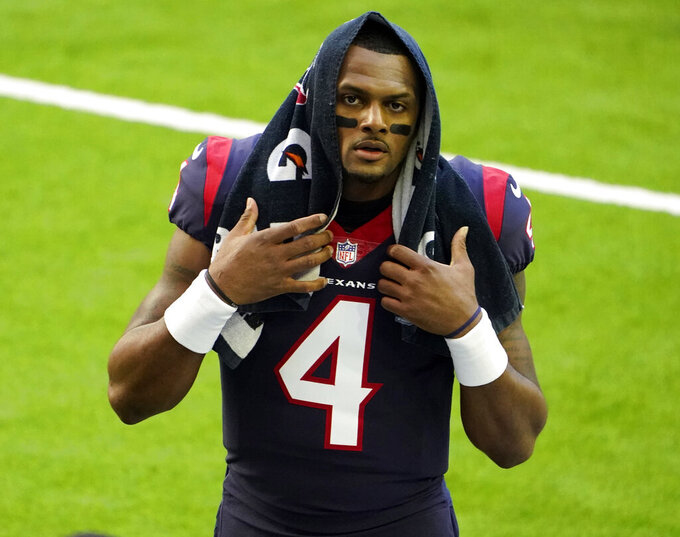 FILE - In this Jan. 3, 2021, file photo, Houston Texans quarterback Deshaun Watson walks off the field before an NFL football game against the Tennessee Titans in Houston. J.J. Watt is gone from the Texans and Watson wants out, too. The Texans have been making plenty of headlines this offseason. Not one has been good. (AP Photo/Eric Christian Smith, File)

HOUSTON (AP) — J.J. Watt is gone from the Houston Texans, and Deshaun Watson wants out, too.

The Texans have been making plenty of headlines this offseason. Not one has been good.

Watt was released on Friday, ending the tenure of the face of the franchise, and things could get even worse in Houston with a possible standoff looming with the star quarterback. Watson has requested a trade. New general manager Nick Caserio has said they have “zero interest” in trading him, and coach David Culley said he expects him to be the team’s quarterback next season.

The story line is a familiar one in Houston, where the Rockets recently dealt with a similarly stormy situation involving superstar James Harden. Rumors swirled all offseason that Harden wanted to leave, but the Rockets didn’t deal him before the season began. That led to a miserable Harden stuck on a team that limped to a 3-6 record. His time in Houston was punctuated by a postgame rant after a blowout loss to the Lakers when he berated the Rockets, saying, “We’re just not good enough.”

He was shipped to Brooklyn the next day, but not before being banned from practice and drawing the ire of his teammates for his attitude and comments.

Could the Texans be headed for the same fate with Watson? If he doesn’t want to be on the team would refusing to trade him make anything better?

Watson, who signed a four-year, $156 million contract last year, has been unhappy with the direction of the team for some time. Sports Illustrated reported weeks ago that Watson was upset the Texans didn’t initially request to interview Kansas City offensive coordinator Eric Bieniemy for their coaching vacancy. They eventually did interview Bieniemy before hiring Culley.

Some have put the blame for the current state of the Texans on owner Cal McNair, who has run the team since the death of his father Bob McNair in November 2018. Although there’s plenty of blame to go around on this mess of a team, former coach and general manager Bill O’Brien, who was fired after an 0-4 start, deserves his fair share of criticism for decisions he made while in charge.

The worst of those moves came last March when he traded receiver DeAndre Hopkins to Arizona for running back David Johnson and a second- and fourth-round draft pick.

There are also questions about the rise of Jack Easterby, the executive vice president of football operations and a former chaplain for the Patriots with no personnel experience who gained power in the wake of O’Brien’s dismissal.

Houston could have tried to trade Watt instead of releasing him, likely receiving at least one draft pick in return. But the defensive end asked McNair to be released and the owner agreed.

“We felt this did right by J.J.,” he said Friday. “Not every decision is easy or easy to understand. You want to do what’s right for our players. We want to focus on bringing championships to Houston.”

So why is Houston refusing to acquiesce to Watson’s request after happily complying with the one from Watt? Keeping Watson on the team until training camp only to have him hold out is sure to be more detrimental to the Texans than getting a big haul in exchange for the quarterback.

Watson's contract makes a trade more difficult because of the future dead money for Houston, which gave him a $27 million contract bonus that is prorated.

The Texans are coming off a 4-12 season and don’t have a first-round draft pick. So even if they keep the electric Watson, it’s hard to envision them being much better next season.

McNair wouldn’t discuss Watson’s future on Friday, other than to say their conversations are “private.” But he did insist letting Watt go is not a sign that they’re rebuilding.

“Let’s be clear. We’re here to win. We’re here to win today,” he said. “The NFL’s so competitive that there’s really no time for rebuilding. We want our fans to know that we’re doing everything we can day in, day out to bring a championship to the city.”

“And every decision we make, even if it’s difficult it’s done with one (thought). And that’s: ‘Is it going to help us bring a trophy to Houston?’ And that’s our goal.”

Yet it seems like every move the Texans make is moving them farther from that goal.