Andre Odom went from scouting players to representing them 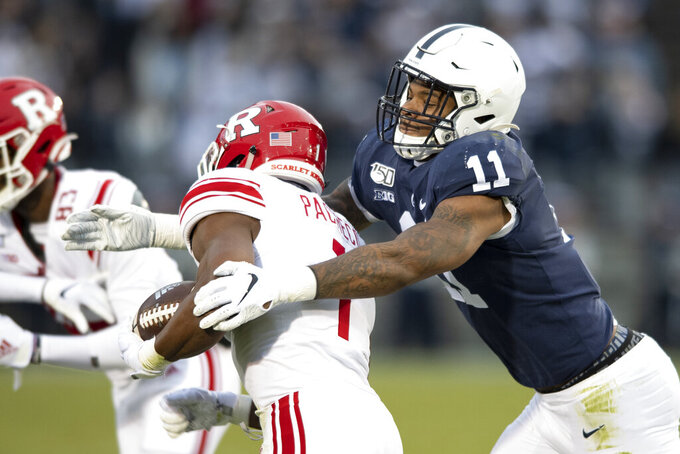 FILE - In this Nov. 30, 2019, file photo, Penn State linebacker Micah Parsons (11) tackles Rutgers tight end Johnathan Lewis (11) in the first quarter of an NCAA college football game, in State College, Pa. Andre Odom joined Athletes First as an agent two years ago and later this month two of his clients — Kyle Pitts and Micah Parsons — could be picked in the top 10 of the NFL draft. (AP Photo/Barry Reeger, File)

Andre Odom worked as a graduate assistant at Temple after his college football career ended and eventually landed a job as a scouting assistant with the Chicago Bears before he transitioned to representing players instead of evaluating them.

He made the right move.

When NFL Commissioner Roger Goodell steps to the podium next Thursday night in Cleveland to announce the first-round draft picks, two of Odom’s clients — Florida tight end Kyle Pitts and Penn State linebacker Micah Parsons — could be picked in the top 10. Another client, Penn State defensive Jayson Oweh, could go in the first round.

It’s been a long journey to reach this point for Odom, an agent with Athletes First who also co-represented 2020 first-round pick K’Lavon Chaisson.

“It’s been an obstacle course of many trials and tribulations, many sleepless nights, 17, 18 hours in the office as a graduate assistant,” Odom said. “Then going to the NFL and working in the front office, having long, tiring days and not seeing your family. It was definitely a journey, a tremendous grind, but it was more than worth it.”

Odom was raised by his grandmother in Philadelphia and was a two-way starter at running back and defensive back at George Washington High School from 2001-03. He went to Bloomsburg University and played defensive back and was a sprinter on the track team before he transferred to Temple.

Odom walked on Temple's football team under coach Al Golden, but a severe back injury ended his playing career before it began. After earning a bachelor's degree in communications, Odom worked in radio sales and banking and returned to his high school as an assistant coach.

He joined Temple's staff as a graduate assistant in 2011 and spent three seasons there while earning a master's degree in sports management.

Odom joined the Bears in 2013, and had not considered becoming an agent until he was fired in 2015. He pursued it because of his passion to help young athletes develop into better men.

“Growing up and being hands on with these athletes, people kind of looked at me as a street agent,” Odom said. “A lot of those individuals are really good people and those athletes need those people because where we’re from, some of us don’t have parents. I didn’t have a mom and dad to hold my hand and walk me through, and a lot of these young men don’t.

Odom credits William Wesley for helping him become an agent at Creative Artists Agency in 2017. Wesley, currently the executive vice president and senior basketball adviser for the New York Knicks, was a consultant at CAA.

“I don’t get to CAA without Wes,” Odom said. “My relationship with him goes far deeper than business. He mentored me and taught me how to deal with people, being strategic, how to treat people the right way. The knowledge I acquired from him has helped me become who I am. It gave me the ability and credibility to sign these guys.”

Wide receiver Robby Anderson was Odom’s first client. He also represented Devon White, Marquise Brown and Rock Ya-Sin. Odom joined Athletes First in January 2020. He had to navigate the challenges of working through a pandemic in his first year at a new agency.

“I wasn’t really able to get out there and hit the road as I would have liked to, but we found a way to get it done,” Odom said.

He also signed Georgia defensive back Mark Webb and Syracuse safety Andre Cisco. Both players expect to hear their name called next weekend.

Odom says there’s an “unfair stigma” attached to being an agent based on a negative perception because of the way they’ve been portrayed on television and in movies.

“If you’re doing it from the right place in your heart, the right place spiritually and mentally, you’re going to really help these guys become who they want to become,” he said. “You’re going to help them through this tough journey that is almost seemingly never ending because someone’s always grabbing at you, someone always wants something. Your phone is always ringing.

Working in sales helped Odom learn how to build and cultivate relationships. His time working in a front office allowed him to learn contract language. His coaching background taught him another important perspective. So despite not having a traditional background, he’s quickly become successful.

“I didn’t have the red carpet laid out for me,” he said. “I had to really go out there and earn everything. I embraced it and that’s what really distinguishes me from a lot of people. My entire life was like that. I never had anything easy. Nothing was ever handed or given to me on a silver platter. That’s not what I come from. So this was going to be no different. I had to really set my mind to it.”

Odom will join Pitts and Parsons next week in Cleveland. After the NFL conducted a virtual draft last year, some players and their families will attend this one. Pitts and Parsons were among the first 10 to accept the invitations.

“It’s certainly life changing and for some of these guys, it's monumental depending on their upbringing and circumstances and how and where they grew up,” Odom said. “You are ecstatic for these guys and their families. But it’s not about us, it’s about them and their joy and their families. Seeing their smiles is breathtaking.”