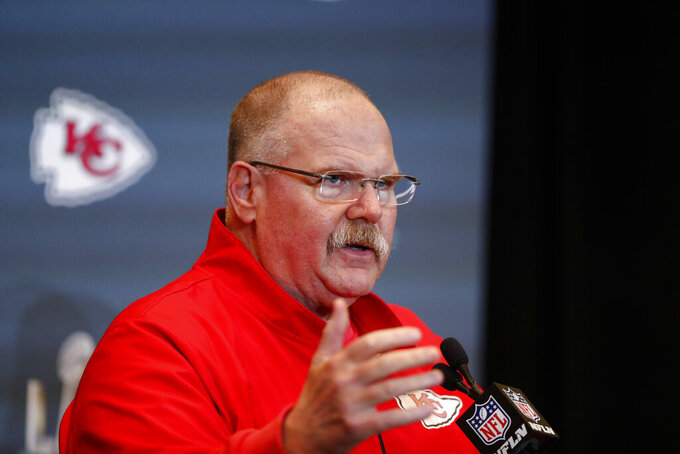 MIAMI (AP) — Andy Reid has won more games than any coach without a Super Bowl title, so people question whether he can win the big one.

The knock against Reid throughout his 21-year coaching career has been his inability to win a championship. He was 1-4 in conference title games during 14 seasons in Philadelphia, and the Eagles lost to the Patriots in the Super Bowl after the 2004 season.

Reid lost another conference title game at home last year with Kansas City. But the Chiefs returned to the AFC championship this season and advanced to face the San Francisco 49ers on Sunday.

His players have talked all week about how badly they want to win this game to give Reid his first ring as head coach — he got one as an assistant with Green Bay 22 years ago — and solidify his Hall of Fame credentials.

Reid won't silence critics who say he's a poor game-day coach until he finally wins one. But his current players and former players say it's more their fault than his.

"I never went into a game feeling unprepared," said former Eagles left tackle Tra Thomas, who played 10 seasons under Reid from 1999-2008. "After that, it's all about execution."

Reid might already have won his Super Bowl if the offense executed better against New England 15 years ago. Donovan McNabb threw three interceptions, got sacked four times and the team had four turnovers. Yet, the Eagles only lost 24-21.

Reid developed a reputation for poor clock management during his time in Philadelphia. That was evident against the Patriots.

Tied 7-7 with 1:03 left in the first half, Reid let the offense run out the clock after getting the ball at the Philly 19-yard line. Then, trailing by 10 in the fourth quarter with just under six minutes left, the Eagles showed no urgency on offense and even huddled up for a few plays.

They scored a touchdown but needed 13 plays and almost four minutes to do it because they moved so slowly. McNabb threw a pick to seal the loss after the Eagles got the ball back at their 4 with 46 seconds left.

Reid's use of timeouts and clock management has also been scrutinized in Kansas City. But the man has 221 victories, including playoffs, so he's had to win some important games along the way.

"What Andy does that a lot of coaches are afraid to do or they just can't do it is he builds his offense around the talent and not just calls plays," McNabb said. "He dials up plays that are the strength of his quarterback."

McNabb's relationship with Reid remains strong even though he was traded from Philadelphia to Washington after the 2009 season. Reid had McNabb speak to the Chiefs before Thursday's practice.

"He's been there and done it," Reid said to a pool reporter. "He's been in the league, played a long time. It was good hearing from him."

Perhaps McNabb's message can inspire the Chiefs and help them deliver the only thing missing from Reid's impressive resume.

Win or lose, the Chiefs are happy to have him.

"Things changed for us seven years ago when we were lucky enough to lure Andy Reid and his wife, Tammy, to Kansas City," owner Clark Hunt said.

Now 50 years after the Chiefs won their last championship and 15 years since Reid's last opportunity to get one, they're close.

"It would be amazing obviously," Patrick Mahomes said. "The work that he's put in every single day at every place he's been at, he's had success. Obviously, you want to get him that Super Bowl."