Another blown lead sends Raiders into bye with 1-4 record 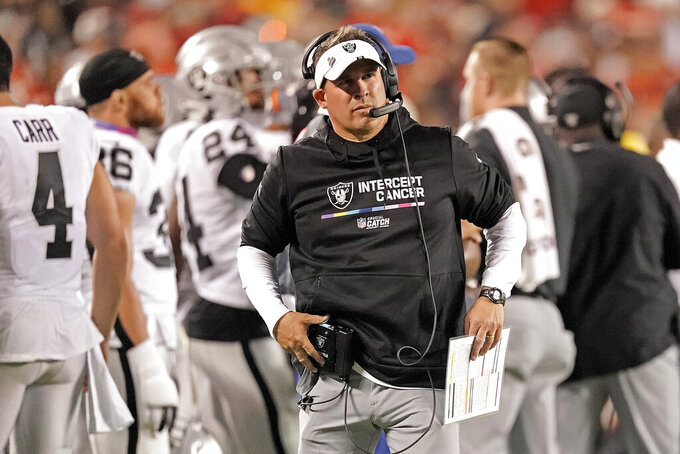 The Las Vegas Raiders have figured out how to to take a big, early lead. Closing it out has been a very different story.

The Raiders blew a 17-point lead on Monday night at Kansas City for their second big collapse of the season and head into their bye week at the bottom of the AFC standings following a 30-29 loss to the Chiefs.

“Learning the lessons the hard way sucks,” coach Josh McDaniels said Tuesday. “But I think our team realizes, we can compete with them. But there’s a difference between just being in the game and then being able to close the game. Those are the lessons that we’re going to have to learn hopefully soon.”

The Raiders (1-4) blew a 20-0 lead in Week 2 against Arizona in the biggest blown lead in franchise history and then couldn't hold off Patrick Mahomes and the Chiefs after going up 17-0.

The offense missed a couple of opportunities to expand on the lead, the defense allowed five straight scoring drives and the Raiders failed to convert a potential go-ahead 2-point conversion with 4:27 to play.

Then their last-ditch chance fell short when Hunter Renfrow and Davante Adams ran into each other on a fourth-and-1 pass.

“That’s what happens when you play a really good team and you make some mistakes and don’t finish the quarters,” McDaniels said.

It all added up to the Raiders becoming the fifth team ever to blow two leads of at least 17 points in the first five games of a season, joining the 2022 Ravens, 2020 Chargers, 2011 Vikings and 1993 Jets.

“It’s frustrating,” Adams said. "It would be less frustrating if you don’t have that great of a team, but we have a really good team so it’s frustrating for it to keep happening. We just have to keep on trucking. Keep sticking to what we do and finish out games.”

Running game. Josh Jacobs followed up on a career-high 144 yards rushing last week against Denver with a career-high 154 yards and a touchdown in this game. He joined Bo Jackson and Marcus Allen as the only Raiders with at least 140 yards rushing in back-to-back games.

Covering tight ends. The Raiders had no answers for Travis Kelce in the red zone, allowing him to catch four short TD passes. Kelce became the fourth tight end ever with at least four TD catches in a game and the first since Jimmie Giles did it for Tampa Bay in 1985 against Miami. Las Vegas has allowed TDs on 14 of 17 red zone drives for a league-worst 82.4%.

Maxx Crosby had two sacks for a second straight game and added a third tackle for a loss on a run play. Crosby is tied for the league lead with six sacks and leads the NFL with 11 tackles for loss on the season — four more than anyone else. He has the most TFLs through five games since Von Miller had 12 in 2012.

Davante Adams. As well as he played on the field with two long TD catches, Adams had a bad moment after the game when he shoved a cameraman to the ground on his way off the field. Adams apologized for his actions. But the NFL is deciding whether Adams deserves a fine or suspension.

TE Darren Waller (hamstring) left the game in the first half and didn't return. ... TE Foster Moreau (knee) and LB Jayon Brown (hamstring) also missed the game but the Raiders are hopeful all three will be able to return after the bye.

2. The Raiders have lost twice in the five games under McDaniels in games they led by at least 17 points. Before this season, the Raiders had been 214-5-1 (.975) in the regular season and playoffs when leading by at least 17.

The Raiders have a week off before hosting Houston on Oct. 24. They have an NFL-worst 3-16 record after the bye since 2003.