Another ugly opener, but a needed victory for Seahawks 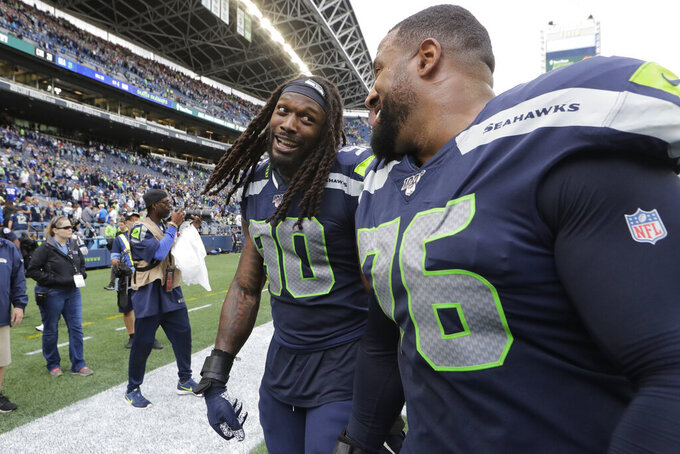 RENTON, Wash. (AP) — Considering the past history, it probably should have been expected the Seattle Seahawks' season opener was going to be kind of ugly.

They always seem to be that way under Pete Carroll. Closer than most expect. Not a whole lot of points scored. And usually Seattle figuring out a way to come out on top.

Seattle's 21-20 win over Cincinnati in Week 1 fit the description of those previous years perfectly. Seattle was outplayed. It struggled to protect the highest-paid player in the NFL as Russell Wilson was sacked four times. The best run team in the NFL last year was held to 72 yards rushing. Seattle went three-and-out on six of 12 possessions that didn't involve a kneel-down.

All that goes without mentioning a defense that debuted Jadeveon Clowney — who was disruptive early on — but ended up watching Cincinnati quarterback Andy Dalton throw for a career-high 418 yards. Although Seattle countered the big day through the air by shutting down Joe Mixon and the Bengals' run game.

But like previous unsightly opening wins over Miami (12-10 in 2016) and Carolina (12-7 in 2013), the Seahawks figured out a way. Seattle took the lead on a 44-yard touchdown pass from Wilson to Tyler Lockett on the first play of the fourth quarter, and escaped from an afternoon most expected to be a blowout.

"There is a lot of stuff for us to get better at," Carroll said Monday. "We were fortunate to get the win. ... Thrilled to get off to that start with so much to gain and improve in all areas really."

Chris Carson carried the load offensively in the opener. His rushing numbers were down, finishing with only 46 yards rushing on 15 carries, but he broke off a 21-yard run on a key third-and-1 late in the fourth quarter. Carson was also Seattle's top pass catcher with six receptions for 35 yards and a highlight-worthy 10-yard touchdown catch-and-run in the first period.

Seattle was intent on getting Carson more involved in the pass game and he had 21 touches on Seattle's 49 offensive plays.

"That was part of the offseason to involve him and it jumped up. ... It's clear why we're trying," Carroll said.

Carroll implied Seattle was arrogant in believing it could run through the Bengals' defensive line and control the game on the ground. The plan didn't work as Seattle's offensive line was bullied by a heavy front from the Bengals. Carson's big carry late made the numbers look adequate, but Seattle had just 51 yards rushing on its other 24 carries.

"We wanted to try knock them off the football and see if we could get that done so we stayed with it. But with the limited amount of plays it felt like we could have done better," Carroll said.

As if the hype train needed any more fuel, Seattle got the dynamic punch it was looking for from rookie wide receiver DK Metcalf. He had four receptions for 89 yards and was Wilson's favorite threat down the field. Cincinnati rolled coverage toward Tyler Lockett, allowing Metcalf a chance to win a couple of important one-on-one matchups.

Free safety Tedric Thompson had a forgettable opener. His worst moment was misjudging a deep pass from Dalton in the closing seconds of the first half, whiffing on the attempt to deflect the pass and watching it fall into Ross's hands for a 55-yard touchdown. The uncertainty is if Seattle has a better option. Lano Hill has struggled with staying healthy throughout his young career and rookie Marquise Blair likely isn't ready to take over the responsibility. Thompson will continue to get tested with Ben Roethlisberger and Drew Brees on the docket the next two weeks.

"I thought he over-tried," Carroll said of Thompson. "He was trying so hard he was flying around and overran a few things. Just mistimed his jump on the big play. He'll play better. It wasn't because he wasn't working hard or trying hard or knowing his assignments. He was going for it."

There is some concern about the severity of a hamstring injury to cornerback and special teams standout Neiko Thorpe, and a calf strain suffered by starting defensive tackle Poona Ford. Carroll also brought up a shoulder injury to rookie Ugo Amadi that was not known about after the game. Amadi started as Seattle's nickel cornerback and left briefly after a big collision with teammate Bradley McDougald, but returned to the game.

Carroll also said they must wait and see about defensive end Ziggy Ansah after soreness in his shoulder kept him out of the opener.

6-0 — The Seahawks are 6-0 under Carroll when an opposing quarterback throws for at least 400 yards.

Seattle doesn't often venture to Pittsburgh and its limited trips there in the past have been mostly unsuccessful. The Seahawks are 2-7 all time in Pittsburgh and have been outscored 45-0 in their last two trips — in 2007 and 2011. But the Steelers looked awful in an opening loss at New England and the chance to be 2-0 before facing New Orleans would be a huge boost for Seattle.