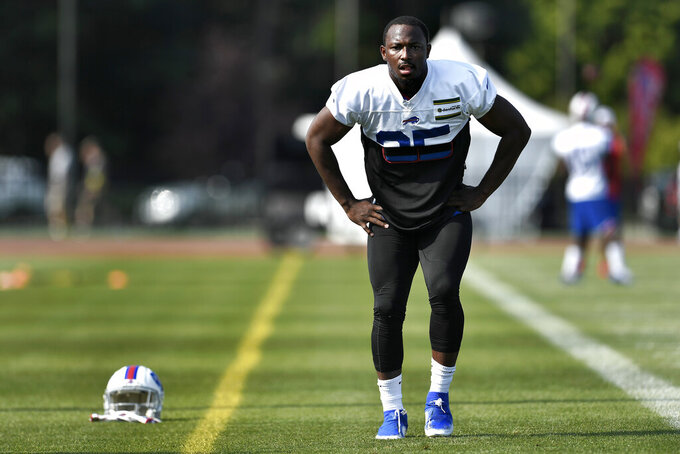 FILE - In this July 25, 2019 file photo, Buffalo Bills running back LeSean McCoy stretches during practice at the NFL football team's training camp in Pittsford, N.Y. A person with direct knowledge of the decision has confirmed to The Associated Press the Buffalo Bills have released veteran running back LeSean McCoy in a stunning move made as NFL teams set their 53-player rosters. The person spoke to The AP on the condition of anonymity on Saturday, Aug. 31, because the Bills have not announced the decision. ESPN.com first reported McCoy being cut. (AP Photo/Adrian Kraus, File)

KANSAS CITY, Mo. (AP) — LeSean McCoy is going from a rebuilding franchise in Buffalo to a Super Bowl contender in Kansas City, and he's reuniting with his close friend and former coach Andy Reid, too.

The Chiefs and the two-time All-Pro running back have agreed to a $4 million, 1-year deal, a person with knowledge of the negotiations told The Associated Press. The person spoke on condition of anonymity because McCoy must still pass a physical, which could be completed as early as Sunday.

That would allow him the week to prepare for the Chiefs' opener in Jacksonville next Sunday.

McCoy would become the top backup to Damien Williams, likely siphoning carries from rookie Darwin Thompson and backup Darrell Williams. The Chiefs traded the other veteran running back that was expected to earn carries, Carlos Hyde, after he failed to impress during training camp and the preseason.

The 31-year-old McCoy spent his first six seasons in Philadelphia, four of them under Reid, before spending the past four seasons with the Bills. The six-time Pro Bowl selection was released on Saturday, when general manager Brandon Beane cited the emergence of rookie Devin Singletary likely leading to a diminished role for a running back who for years has been a "bell-cow back."

"Difficult as it was, we always have to make what we think is the best decision for our team, and we just felt it was the right time to make this move," Beane said. "We did this being a running back-by-committee with whatever group we kept, and that would be a different role for LeSean."

Over the course of 10 seasons, McCoy has run for more than 10,600 yards, placing him 25th on the career list and fourth among active players. Some of his best seasons came under Reid, including the 2011 season in which he ran for 1,309 yards and 17 touchdowns while earning his first All-Pro nod.

McCoy had kept Father Time at bay the past few years, too. He had back-to-back 1,000-yard seasons in Buffalo before a drop-off last season, when he totaled just 514 yards and three touchdowns.

A few weeks ago, McCoy acknowledged seeing speculation that he may be traded or released, but he also expressed confidence that he would finish out his five-year contract with the Bills.

"I know who I am. I know how to play. And my teammates know that," McCoy said. "I'm the guy. I feel like that. That's what I've been told. And that's my everyday approach."

Damien Williams emerged as the Chiefs' lead running back late last season, when Kareem Hunt was released following a series of off-the-field issues. But despite showing a dynamic ability in both the run game and the pass game, Williams has been hampered by injuries, including a hamstring issue in camp.

That left the Chiefs with Thompson, an untested rookie out of Utah State, and journeyman Darrell Williams in the backfield. And when Chiefs general manager Brett Veach was asked about McCoy specifically on Saturday, he admitted that the club was likely to inquire about him.

"As a step-back, broad-view type of perspective, listen, we play a lot of common opponents and got to see him on tape, and he's still a talented player and does a lot of great things in the passing game," Veach said. "I'm sure that he is a guy that we will take a peek at."

Veach also alluded to McCoy's relationship with Reid, saying: "We kind of have a rapport with him."

McCoy should have some familiarity with the terminology of Reid's offense, but it has also undergone major changes since the running back was last carrying the ball for him in Philadelphia. The Chiefs have embraced a more wide-open style under MVP quarterback Patrick Mahomes, and that means McCoy will have a steep learning curve if he expects to be active against the Jaguars next weekend.

That's unlikely to bring him down.

Despite his affinity for Buffalo, McCoy is going from a franchise that has made just one playoff appearance since 1999 and won six games a year ago to an organization that has won three consecutive AFC West titles and came within an overtime coin-flip of possibly going to the Super Bowl last season.