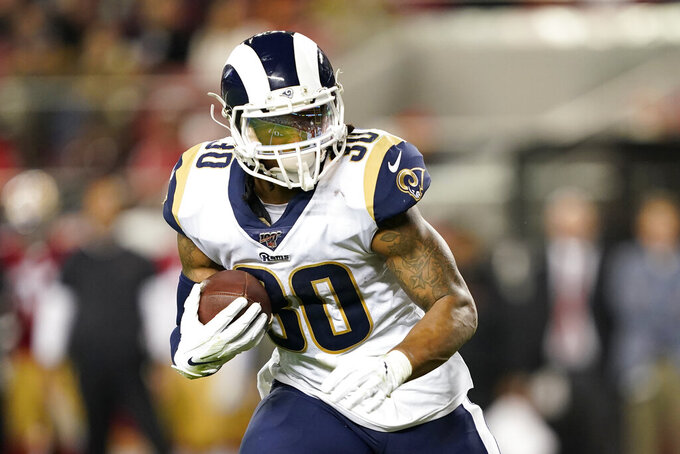 The Atlanta Falcons didn't wait long to celebrate the deal.

“WE GOT HIM,” the Falcons exclaimed on their Twitter account early Friday, soon after news emerged of Gurley's $6 million, one-year deal with the Falcons.

The agreement was confirmed to The Associated Press by a person familiar with the deal. The person confirmed the agreement on condition of anonymity because the deal will not be official until Gurley passes a physical. The league isn’t allowing players to report to new teams immediately for those physicals during the coronavirus pandemic.

The agreement was reached less than 24 hours after Gurley was released by the Los Angeles Rams on Thursday. The three-time Pro Bowl running back was released minutes before $10.5 million in his contract with the Rams became fully guaranteed.

The Falcons had good reason to celebrate the news. They needed a replacement for Devonta Freeman as the leader of their ground game, and Gurley's arrival should be good news for ticket sales.

Gurley will be making a return to the state of Georgia. He was a standout at the University of Georgia, rushing for more than 3,000 yards in three seasons.

The agreement with the 25-year-old Gurley comes less than a week after the Falcons released Freeman. Atlanta ranked only 30th in the NFL in rushing in 2019 and is hoping for a significant boost from Gurley.

Gurley has rushed for more than 1,000 yards in three of his five seasons with the Rams. He ran for a career-low 857 yards with the Rams last season. His average of 3.8 yards per carry was the second-lowest of his career.

Gurley's physical will be especially important. He had a persistent left knee injury that limited his effectiveness late in 2018. The issue remained last season, even though he played in 15 games.

When healthy, Gurley has been one of the league's most productive backs as a runner and receiver. He leads the NFL with 58 rushing touchdowns since he joined the league in 2015. His 5,404 yards rushing in that span rank second in the league, behind Dallas' Ezekiel Elliott (5,405).

Through five seasons, Gurley has averaged 43.6 catches, including a career-high 64 for 788 yards and six touchdowns in 2017.

Gurley, a 2015 first-round pick, signed a four-year, $60 million contract with the Rams in June 2018, making him the league's highest-paid running back at the time. The deal included $45 million in guaranteed earnings. Gurley was cut before even playing the first year of that extension.

The agreement with Gurley is the second significant move of free agency for the Falcons. The team addressed another pressing need by agreeing to a $48 million, three-year deal with outside linebacker Dante Fowler on Wednesday. Fowler is expected to boost the team's pass rush, a chronic weak spot.

The Falcons' offense suffered a hit when tight end Austin Hooper, a two-time Pro Bowler, agreed to a deal with the Cleveland Browns. Atlanta acquired tight end Hayden Hurst from the Baltimore Ravens on Monday. The Falcons added Hurst and a 2020 fourth-round pick from the Ravens in exchange for second- and fifth-round picks in this year's draft.

The Falcons on Friday also re-signed safety Sharrod Neasman to a one-year contract. Neasman, who was an unrestricted free agent, played in 15 games last season and had four tackles on special teams.