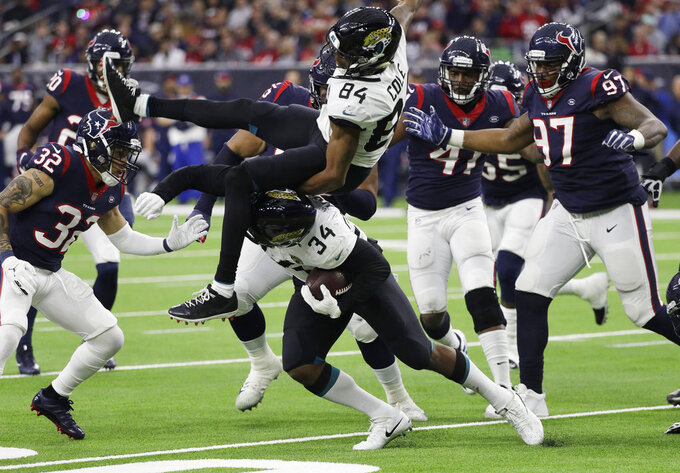 Jacksonville Jaguars running back Carlos Hyde (34) upends teammate Keelan Cole (84) as he runs against the Houston Texans during the second half of an NFL football game, Sunday, Dec. 30, 2018, in Houston. (AP Photo/David J. Phillip) 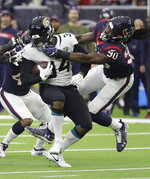 The Jacksonville Jaguars fired running backs coach Tyrone Wheatley and three more assistants Monday night, according to a person familiar with the situation. The person spoke to The Associated Press on the condition of anonymity and said offensive line coach Pat Flaherty, secondary coach Perry Fewell and defensive line coach Marion Hobby also were let go one day after the season finale.

Wheatley's dismissal was the least surprising. It came one day after Fournette and T.J. Yeldon were sharply criticized for being disengaged from coaches and teammates during the 20-3 loss at Houston.

Coughlin ripped both players for being "disrespectful" and "selfish." He said "their behavior was unbecoming of a professional football player."

Fournette has missed 11 games in two seasons, including two because of suspensions, and has shown little interest in being a good professional. Yeldon, a pending free agent, barely played down the stretch. Jacksonville also traded a fifth-round pick for Carlos Hyde, who ran for 189 yards in eight games.

All four assistants had been with the team for two seasons.

Wheatley's position group was among the least production in 2018. Fournette was one of the NFL's biggest disappointments, finishing with 439 yards rushing and five touchdowns while missing eight games.

Flaherty's line was ravaged by injuries, but he also got little out of free-agent guard Andrew Norwell. Fewell's secondary wasn't nearly as productive as it was in 2017 and saw veteran safety Barry Church waived late in the season. Hobby's unit underperformed at several positions, and first-round draft pick Taven Bryan made marginal gains in his rookie year.

Marrone said earlier Monday that he didn't want to make any staff changes based on emotion, adding that he would make sure "it's for the right reasons and not just a reaction."