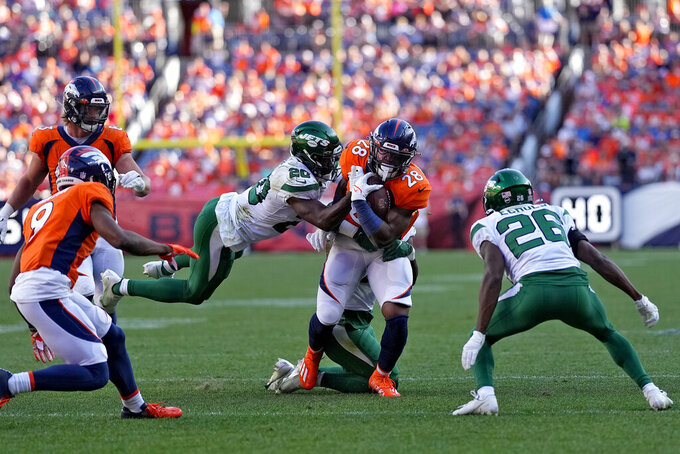 FLORHAM PARK, N.J. (AP) — New York Jets safety Marcus Maye will be sidelined three to four weeks with an ankle injury, according to a person with direct knowledge of the situation.

The exact nature of the injury is uncertain, but it is believed Maye was hurt in the 26-0 loss at Denver on Sunday — although he played every snap on defense.

Maye was surprisingly listed on the Jets' injury report Wednesday as having not practiced. The news came a few hours after coach Robert Saleh spoke to reporters, but didn't mention Maye's injury.

NFL Network first reported the timeline for Maye's injury. The person confirmed it to the AP on condition of anonymity because the team hadn't announced how long the safety will be sidelined.

Erik Burkhardt, Maye's agent, curiously posted on Twitter the safety “Should be back fully healthy just before the trade deadline…” and added a handshake emoji.

Maye was given the franchise tag by the Jets during the offseason and the sides were unable to reach an agreement on a long-term extension. He expressed disappointment over not getting a new deal, sitting out voluntary practices in the spring before showing up for mandatory minicamp in June and then training camp in July.

Maye is playing this season on the franchise tag amount of $10.6 million, and the Jets could choose to use the tag on him again next offseason if they don't reach agreement on an extension — although that could further strain the relationship between the sides. Or the Jets, who are off to an 0-3 start under Saleh, could try to trade Maye before the NFL's trade deadline on Nov. 2.

“I’ll play where I’m welcome,” Maye said in late-July. “I was drafted here. I’d love to be here.”

Maye was a second-round pick out of Florida in 2017 and has established himself as one of the most consistent performers at his position. He also stepped into a leadership role last season after Jamal Adams was traded to Seattle and was selected the Jets' MVP by his teammates.

Maye is second to C.J. Mosley in tackles with 23 along with a sack, a quarterback hit and one pass defensed.

The injury to Maye leaves the Jets without their two projected starters at safety as they prepare to face Tennessee at home Sunday. Lamarcus Joyner was lost for the season in the opener with an elbow injury that required surgery.

Adrian Colbert and Jarrod Wilson are the only other safeties on the active roster, although both Ashtyn Davis and Sharrod Neasman were cleared to return to practice Wednesday after stints on injured reserve. Davis has been recovering from a foot injury suffered late last season, while Neasman hurt a hamstring before the season opener. New York has three weeks to activate Davis and Neasman or they will revert to IR and be lost for the season.

Sheldrick Redwine, who played in the first two games, is also on the Jets' practice squad.

The news on Maye added to what was already a tough day for injuries on the team. Wide receiver Jeff Smith has a concussion after he was in a car accident on his way to the team's facility Wednesday morning. Smith is in the concussion protocol and appears unlikely to play Sunday against Tennessee.