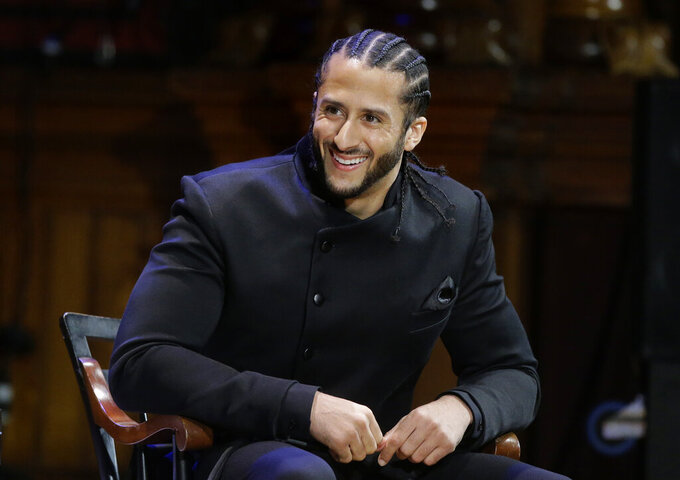 FILE - In this Oct. 11, 2018, file photo, former NFL football quarterback Colin Kaepernick smikes on stage during W.E.B. Du Bois Medal ceremonies at Harvard University, in Cambridge, Mass. Colin Kaepernick wants to play in the NFL, even if he has to compete to get on the field. A source close to Kaepernick told The Associated Press on Friday: “Colin has always been prepared to compete at the highest level and is in the best shape of his life.” Kaepernick released a video earlier this week saying: “5 a.m. 5 days a week. For 3 years. Still Ready.” (AP Photo/Steven Senne, File)

PHILADELPHIA (AP) — Colin Kaepernick is eager to prove he's good enough to play in the NFL.

A person close to Kaepernick told The Associated Press on Friday: "Colin has always been prepared to compete at the highest level and is in the best shape of his life." The person spoke anonymously because of the confidential nature of discussions with teams.

The 31-year-old Kaepernick hasn't played since 2016 with the San Francisco 49ers. He helped start a wave of protests about social and racial injustice that season by kneeling during the national anthem at games. He drew strong criticism from President Donald Trump.

But Trump on Friday told reporters when asked if Kaepernick should play in the NFL: "Only if he's good enough. I know the owners, I know Bob Kraft. They will do anything they can to win games."

The Philadelphia Eagles lost backup Nate Sudfeld to a broken left wrist suffered Thursday night, raising speculation the team would be in the market for an experienced quarterback. Sudfeld was scheduled for surgery, but coach Doug Pederson said it's not a season-ending injury and the team was content with No. 3 quarterback Cody Kessler and rookie Clayton Thorson.

However, Eagles starting quarterback Carson Wentz has sustained season-ending injuries each of the past two seasons. Nick Foles led Philadelphia to four playoff wins in two years and was 2018 Super Bowl MVP, but signed an $88 million, four-year deal with Jacksonville in free agency.

Sudfeld has thrown 25 passes in the NFL. Kessler is 2-10 as a starter in three seasons with Cleveland and Jacksonville.

The Ravens considered signing Kaepernick in the summer of 2017 when starting quarterback Joe Flacco was dealing with a back injury that would keep him out for the entire preseason. Owner Steve Bisciotti said he consulted with fans and the team ultimately passed.

Kaepernick met with Seattle a couple of years ago, but Seahawks coach Pete Carroll said he should be a starter in the league and the team only wanted a backup for Russell Wilson.

Former 49ers coach Jim Harbaugh said he has told teams who've asked him about Kaepernick that he's a "great competitor" and he'll "have a great career and be a great quarterback, win championships."

The protests slowed down last season as the NFL made contributions to organizations chosen by players and promised more attention to social justice issues. Two players close to Kaepernick, Carolina's Eric Reid and Miami's Kenny Stills, continue to kneel.

While he has been away from the playing field, Kaepernick has become an advocate for social and racial justice and became the face of Nike's "Just Do It" campaign.

The NFL in February settled a collusion grievance Kaepernick and Reid filed against the league. Reid, who played 13 games last season for the Panthers, signed a three-year contract with Carolina in February.