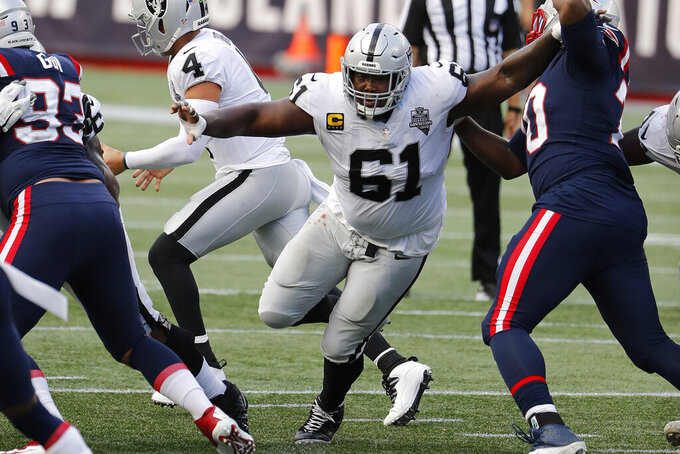 FILE - Las Vegas Raiders center Rodney Hudson blocks against the New England Patriots during an NFL football game at Gillette Stadium in Foxborough, Mass., in this Sunday, Sept. 27, 2020, file photo. The Las Vegas Raiders are planning to release star center Rodney Hudson as part of a major overhaul of the team's offensive line. A person familiar with the move said Tuesday, March 16, 2021, that Hudson will be released with two years left on his current contract. The person spoke on condition of anonymity because the move hadn't been announced. NFL Network first reported the move.(AP Photo/Winslow Townson, File)

The Las Vegas Raiders are planning to release star center Rodney Hudson as part of a major overhaul of the team’s offensive line.

A person familiar with the move said Tuesday that Hudson will be released with two years left on his current contract. The person spoke on condition of anonymity because the move hadn’t been announced. NFL Network first reported the move.

A second person familiar with the deal says the Raiders also have agreed to a deal to keep linebacker Nicholas Morrow before he was set to become a free agent on Wednesday. The person spoke on condition of anonymity because the deal hasn't been announced.

The Raiders are completely revamping their offensive line that was one of the most expensive in the league. The team has agreed to trade right tackle Trent Brown to New England in a deal that will be finalized Wednesday and cut left guard Richie Incognito. Right guard Gabe Jackson also is expected to be cut but that move hasn’t happened yet.

The only starter from 2020 assured of returning is 2018 first-round left tackle Kolton Miller. Denzelle Good, who filled in as a starter at both right tackle and left guard last season, is set to become a free agent on Wednesday.

With Hudson on his way out, the Raiders are expected to turn the center duties over to Andre James, who signed with the team as an undrafted free agent out of UCLA in 2019. James started one game in place of Hudson in 2019 and has played 116 offensive snaps in his career.

Morrow originally signed with the Raiders in 2017 as an undrafted free agent out of Division III Greenville. He managed to step in and play immediately as a rookie and is one of the few players left on the Raiders from before coach Jon Gruden returned in 2018.

Morrow is coming off his best season as a pro. He started 11 games and recorded one interception, nine passes defensed, three sacks, eight tackles for loss, six quarterback hits, one forced fumble and one fumble recovery.

With Corey Littleton and Nick Kwiatkoski also back after signing as free agents last season, the Raiders will have all three starting linebackers back for a second straight season.