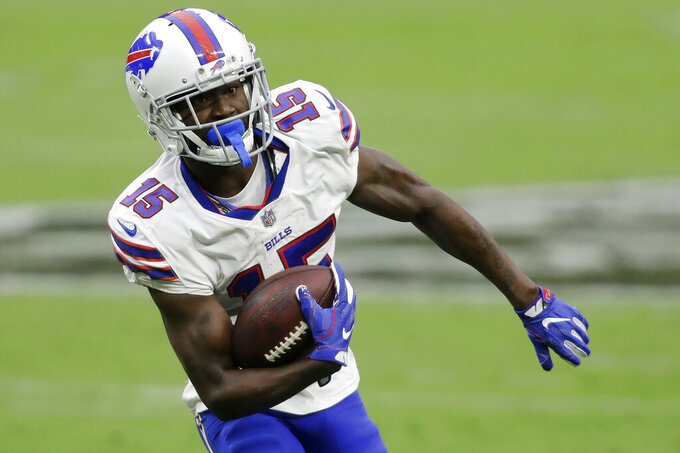 FILE - Buffalo Bills wide receiver John Brown (15) runs against the Las Vegas Raiders during the first half of an NFL football game in Las Vegas, in this Sunday, Oct. 4, 2020, file photo. The Las Vegas Raiders have agreed to a one-year contract with free agent receiver John Brown to replace the departing Nelson Agholor. A person familiar with the deal says the sides agreed on the deal Wednesday, March 21, 2021. The person spoke on condition of anonymity because the contract hadn't been signed. (AP Photo/Isaac Brekken, File)

Two people familiar with the deal say the Raiders reached agreement on the deals on Wednesday at the start of the new league year. The people spoke on condition of anonymity because the contracts haven't been signed.

Brown will earn $3.75 million with incentives that could raise it to $5.5 million, according to SiriusXM NFL Radio’s Adam Caplan, who first reported the deal.

The Raiders also continued an overhaul of their offensive line. They traded center Rodney Hudson and a seventh-round pick to Arizona for a third-round pick after planning to cut the three-time Pro Bowler.

A person familiar with the deal said they also dealt guard Gabe Jackson to Seattle for a fifth-rounder. The person spoke on condition of anonymity because the trade hadn't been announced.

The Raiders had previously agreed to trade right tackle Trent Brown to New England along with a swap of 2022 draft picks. Those three deals save Las Vegas about $25 million on the 2021 salary cap.

The Raiders did bring back two linemen from last year's team, signing Richie Incognito to a cheaper one-year deal after previously cutting him.

A person familiar with the deal also said versatile offensive lineman Denzelle Good re-signed with a two-year contract. The person spoke on condition of anonymity because that hadn't been announced either.

Brown provides the Raiders with the veteran deep threat at receiver after Nelson Agholor left in free agency to New England.

Brown, who turns 31 in April, is coming off the second-least productive season of his career as he was limited to nine games because of knee and ankle injuries and got fewer targets because of the addition of Stefon Diggs in Buffalo.

Brown had 33 catches for 458 yards and three touchdowns last season to go along with 10 catches for 86 yards in three playoff games.

The Raiders are hoping for better production from Brown in 2021 with better health and a bigger role on an offense with fewer proven wide receivers.

Ruggs and Edwards struggled as rookies with Ruggs catching just 26 passes and Edwards only 11 last season. Renfrow has 105 catches in two seasons but is mostly limited to slot duty.

The speedy Brown offers a deep threat with his 14.8 yards per reception ranking eighth in the NFL among players with at least 200 catches since 2014, with his average catch coming 11.1 yards downfield to rank sixth best.

He has 320 career catches for 4,748 yards and 31 TDs in 96 games over seven seasons with Arizona, Baltimore and Buffalo.

Thomas was picked third overall by San Francisco in 2017 but struggled during his time with the 49ers as he lacked the speed to thrive as an edge rusher and wasn't powerful enough to rush the quarterback consistently from the inside.

Jefferson adds another option on the defensive line after spending his first four seasons in Seattle when he played on a similar defense to the one Raiders defensive coordinator Gus Bradley uses and the 2020 season in Buffalo.

Hankins has spent the past three seasons with the Raiders and is very effective against the run.

The Raiders acquired Jones during the 2019 season from Buffalo. He had 14 catches for 154 yards and one TD last season and provides depth.