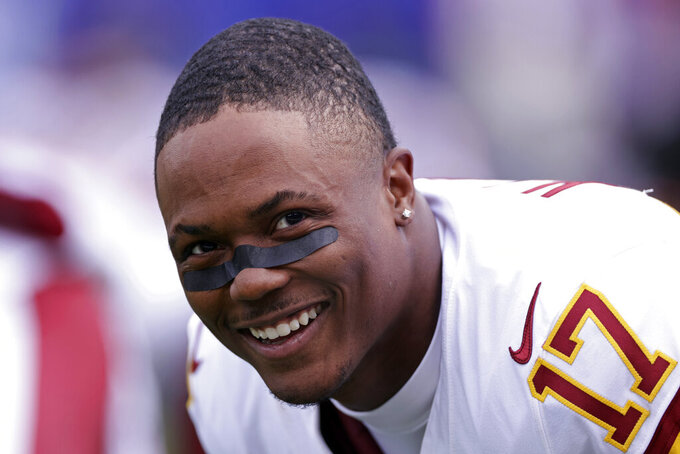 FILE - Washington Football Team wide receiver Terry McLaurin (17) warms up before an NFL football game against the New York Giants on Sunday, Jan. 9, 2022, in East Rutherford, N.J. Two people with knowledge of the move say the Washington Commanders have agreed to terms on a three-year contract extension with star wide receiver Terry McLaurin. The people spoke to The Associated Press on condition of anonymity Tuesday, June 28, 2022, because the deal had not been announced. (AP Photo/Adam Hunger, File)

Terry McLaurin and the Washington Commanders hammered out a new contract for the star receiver, ending the team's biggest football-related saga of a tumultuous offseason a month before training camp begins.

McLaurin agreed to terms on a three-year contract, according to two people with knowledge of the move who spoke to The Associated Press on condition of anonymity Tuesday because the deal had not been announced.

One person confirmed the new deal is worth up to $71 million with roughly $53 million guaranteed, including a $28 million signing bonus. According to Spotrac, a website that tracks contracts, it's the highest signing bonus for a receiver, slightly more than the $27.5 million DeAndre Hopkins got from the Arizona Cardinals in 2020.

McLaurin, who turns 27 in September, had one year left on his rookie contract and skipped offseason workouts while negotiations were ongoing. Coach Ron Rivera expressed confidence about a deal getting done throughout those workouts despite McLaurin's absence.

“It is never contentious,” Rivera said recently about negotiations with McLaurin's camp. "I can promise you that much. So, we’re feeling pretty good and pretty confident at some point, this will get done.”

A third-round pick in 2019, McLaurin has become Washington’s best player since breaking into the NFL three years ago. The Ohio State product has 222 catches for 3,090 yards and 16 touchdowns in 46 regular-season games — all while playing with eight different quarterbacks.

“Terry’s a guy that you want to build a team around,” defensive tackle Jonathan Allen said last month. “He represents everything we want to build here.”

With this new contract, which was first reported by NFL Network, that's exactly what the Commanders are doing.

With the aim of stabilizing the quarterback situation, they acquired Carson Wentz from Indianapolis in March and hope he develops chemistry with McLaurin and fellow wideouts Curtis Samuel, Dyami Brown and first-round pick Jahan Dotson.

McLaurin missing voluntary organized team activities and mandatory minicamp means that process will start in earnest when training camp opens in late July. Rivera insisted he wasn't worried about how those missed snaps will hurt McLaurin and Wentz.

“That’s not a big concern for a couple of reasons,” Rivera said. “Terry’s a professional and so is Carson. And they’ll get their time, their opportunity to work together once we get into the training camp. I believe that.”

Getting a deal done with McLaurin completes the most important task on Washington’s offseason to-do list. It’s also a positive on-field development for an organization that has been dealing with several off-field issues, from a Congressional investigation into the team’s workplace culture that has zeroed in on owner Dan Snyder to defensive coordinator Jack Del Rio’s comments downplaying the Jan. 6 insurrection at the U.S. Capitol that drew a $100,000 fine and an ongoing search for a new stadium site that has so far proven unsuccessful.

It also scratches off the possibility of a major camp distraction. After reports emerged about McLaurin agreeing to terms, running back Antonio Gibson tweeted: “Thank you.. I was getting tired of that question #BigPaid.”