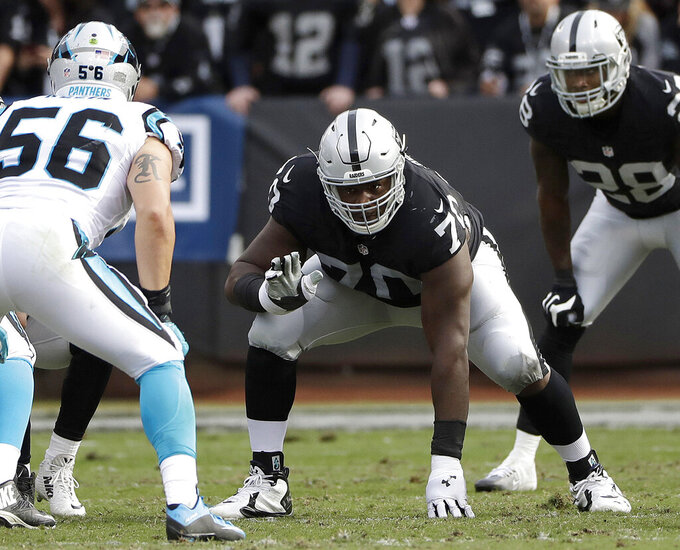 FILE - In this Nov. 27, 2016, file photo, Oakland Raiders offensive guard Kelechi Osemele (70) lines up during the team's NFL football game against the Carolina Panthers in Oakland, Calif. Two people with direct knowledge of the trade tell The Associated Press that the New York Jets have agreed to acquire left guard Kelechi Osemele from the Oakland Raiders. The people spoke to the AP on condition of anonymity Sunday, March 10, 2019 because the trade can't be completed until the new league year starts Wednesday. (AP Photo/Marcio Jose Sanchez, File)

NEW YORK (AP) — The New York Jets made a big move to get a big man to bolster their offensive line.

Two people with direct knowledge of the trade told The Associated Press that the Jets agreed Sunday to acquire two-time Pro Bowl left guard Kelechi Osemele from the Oakland Raiders.

The deal includes the Jets sending their fifth-round draft pick to the Raiders for Oakland's sixth-rounder, according to one of the people who spoke to The AP on condition of anonymity because the trade can't be completed until the new league year starts Wednesday.

The deal is the second by the Raiders in less than 24 hours. They agreed Saturday to acquire receiver Antonio Brown in a trade with Pittsburgh.

The 6-foot-5, 330-pound Osemele fills a major need on the Jets' offensive line in front of quarterback Sam Darnold. Starting left guard James Carpenter is scheduled to become a free agent after an injury-shortened season. Carpenter spent the past four seasons with New York after playing in Seattle for four and helping the Seahawks win the Super Bowl in 2014.

But the Jets appeared ready to move on from Carpenter, who turns 30 later this month and is coming off a shoulder injury that limited him to 10 games last season.

New York, which entered the offseason with question marks on its offensive line at center and left guard, is re-signing Jonotthan Harrison, who started the final seven games at center when Spencer Long struggled with injuries and consistency. But it's uncertain whether Harrison is in new coach Adam Gase's plans as the starter moving forward. Long was released last month after just one season with the Jets and has since signed with Buffalo.

Meanwhile, the Raiders save $10.2 million on their salary cap by dealing Osemele, who turns 30 in June. He is also due $11.7 million next season, but none of the remaining salary includes guaranteed money.

Osemele was a second-round pick of Baltimore in 2012 and he started every game at right tackle as a rookie before moving to left guard to replace the injured Jah Reid in the postseason. He was limited to seven games the following year because of a back injury, but started 28 games over the next two seasons for the Ravens.

He signed a five-year, $58.5 million deal with Oakland in 2016 and made the Pro Bowl in each of his first two years with the Raiders. Osemele's performance dropped last season as he dealt with toe and knee injuries that limited him to 11 games.

Raiders coach Jon Gruden and first-year general manager Mike Mayock made an even bigger splash Saturday night when they swung the deal to acquire the prolific but disgruntled Brown.

Oakland will sign Brown to a new three-year deal with the Raiders that will pay him $50.125 million instead of the $38.925 million he was owed by the Steelers. The deal also includes $30 million guaranteed, compared to none remaining in his old deal. It also gives Derek Carr the best offensive weapon he has had in Oakland since entering the league in 2014.