Are up-and-down Bengals ready to make a playoff run? 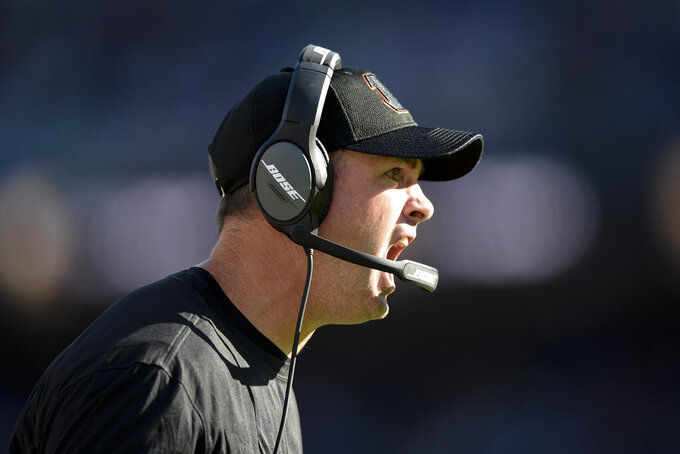 CINCINNATI (AP) — D.J. Reader knows maturity and resilience matter when it comes to winning games down the stretch in a long, arduous NFL season.

The veteran defensive tackle — like every other Bengals player performing self-analysis during the team's off week — is still trying to figure out how Cincinnati managed to follow a solid 5-2 start with two particularly bad losses.

The more important question is whether this team has developed enough in coach Zac Taylor's third season to be ready for the consistently high level of playmaking required in the second half of the schedule to get to the playoffs — and make an impact.

“I don’t know that I would say it’s just growing pains and chalk it up to that,” Reader said of the inconsistency. “You don’t want to be passive and think it’s just that. I think it’s just more so everyone needs to understand that week to week, you have to bring your lunch pail and you got to be ready for whatever the assignment is, and you have to go out there and play. Week to week, anybody can beat anybody in this league."

In the NFL, he added, "you have to go out there and earn those wins.”

Cincinnati (5-4) has already topped its victory total in each of the first two years of Taylor's tenure. The Bengals have beaten AFC North rivals Pittsburgh (5-3) and Baltimore (6-2), but were smashed by the Cleveland Browns (5-4) 41-16 last week. The division is up for grabs, and the Bengals are in it — a rare situation for a team that has finished last for three straight seasons.

Second-year quarterback Joe Burrow is among the league leaders in touchdown passes with 20, but his 11 interceptions tie him with Carolina's Sam Darnold for most in the league. Rookie receiver Ja'Marr Chase has the makings of a superstar but wasn't a factor in the last two losses and has dropped potential touchdown passes. Rookies have been pressed into service on the offensive line with varied results.

Reader and the others have talked up the Bengals' exceptional locker room culture and the fact that even the younger players are holding themselves accountable, looking inward and not pointing fingers when the team stumbles.

“To be honest, it’s all about the mentality that we’ve got up in here," said running back Joe Mixon, one of the team captains. “We know the players that we have, we know the talent that we’ve got, and sometimes you can get carried away with everything being so big, and you just forget about the little things. And that’s kind of what it came down to” in the Browns loss last week.

“Two losses can sometimes feel like 10,” Taylor said. "But we’ve got a mature enough team to handle it right and push us through this little bit of adversity, go on the road (after the break) and get a win and set ourselves back on the direction that felt like we were in a couple weeks ago.”

The Bengals will have to traverse a rugged road to make the playoffs for the first time since 2015. Cincinnati faces Las Vegas next, on Nov. 21, before returning home to play the Steelers, winners of four straight. The Bengals host Baltimore after Christmas and finish the season at Cleveland on Jan. 9. Mixed in are matchups with the Chargers and the Chiefs, both battling the Raiders for NFC West supremacy.

Reader said he sees everybody on the team, regardless of tenure, working hard enough to win.

“I don’t think it’s a lack of preparation or lack of effort from anybody,” he said. “That’s not the case. It’s just execution. So that’s really a case of what it is, and just knowing that no one is going to feel sorry for you. You’ve just got to go out there and make the next play, and that’s OK.”