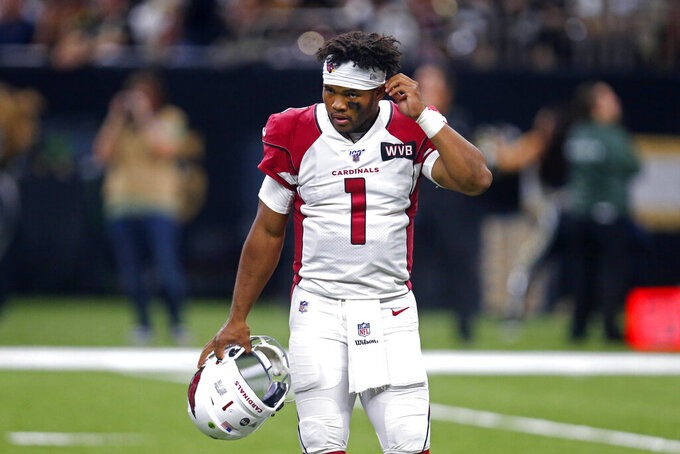 Arizona Cardinals quarterback Kyler Murray (1) walks off the field after being sacked in the second half of an NFL football game against the Arizona Cardinals in New Orleans, Sunday, Oct. 27, 2019. The Saints won 31-9. (AP Photo/Butch Dill)

TEMPE, Ariz. (AP) — Arizona's three-game winning streak is over after a 31-9 loss to the New Orleans Saints and there's no time to rest.

The Cardinals have a bunch of banged-up running backs and a quick turnaround before Thursday night's game against the San Francisco 49ers, who are 7-0 and coming off an impressive 51-13 win over the Carolina Panthers.

"It's tough, but everyone deals with it," Arizona coach Kliff Kingsbury said. "Offensively, we had a good rhythm going with both those guys and when you lose them both, you've got to find other ways to move the football.

"That's what we're working through this week."

The Cardinals traded for running back Kenyan Drake on Monday, sending a conditional sixth-round pick in 2020 to the Miami Dolphins. Drake's presence should help but it remains to be seen how effective he can be considering he'll have just two days with the team before Thursday's game.

"He's an explosive guy who has been in the league for a while," rookie quarterback Kyler Murray said. "I definitely have confidence that he'll come in and make plays."

Arizona's defense played well against the Saints for three quarters before Drew Brees — who returned after missing five games because of a thumb injury — threw two fourth-quarter touchdowns. Brees finished with 373 yards passing and three touchdowns.

For a young offense, Arizona continues to show discipline.

The Cardinals were able to stay in the game against the Saints for much of the game because they didn't make huge mistakes. The team hasn't lost a fumble through eight games and Murray has thrown just four interceptions. The four turnovers through eight games are the lowest mark in the league.

Offensive balance. A big reason for the Cardinals' recent improvement was the emergence of the Johnson-Edmonds combo since both players can run the ball and catch passes out of the backfield. Now that both are hurt, Kingsbury's going to have to rework his plans against the 49ers.

Drake's presence will help but there's no doubt more of the load falls on Murray, who threw for 220 yards against the Saints.

WR Christian Kirk. The second-year pro was back on the field after missing three games with an ankle injury and caught eight passes for 79 yards. He also had one carry for 19 yards. With an unsettled running back position, Kirk's presence on offense will be crucial as the team continues to search for ways to move the ball.

Kingsbury. The first-year coach is known for his offensive acumen and his play-calling has been effective through the first two months. But Sunday's game against the Saints wasn't his best performance.

In particular, his decision to go for it on fourth-and-1 on his team's 30-yard line was questionable.

Arizona was trailing just 10-6 in the third quarter, but New Orleans stopped the fourth-down try and then quickly scored a touchdown for a 17-6 advantage.

Kingsbury said he wasn't sure how much time Johnson or Edmonds would miss. He said Johnson was "day to day" and Edmonds was "doubtful" for Thursday's game. ... Rookie DE Zach Allen has missed the past four games with a neck injury. Kingsbury said the team was being "overly cautious" with the injury and wants him at 100 percent when he does come back.

7 — The Cardinals are doing a good job of avoiding turnovers. The problem is their defense is not very good at forcing them. Arizona has forced just seven turnovers which is tied for 26th in the league.

Arizona did a nice job with a three-game winning streak against a group of struggling teams before the loss to the Saints. Now the Cardinals are facing one of the NFL's best with the 49ers coming to town on Halloween night.

Kingsbury's biggest challenge is piecing together the running game with Drake and others. If the Cardinals have some semblance of balance, it would give them a shot at the upset.