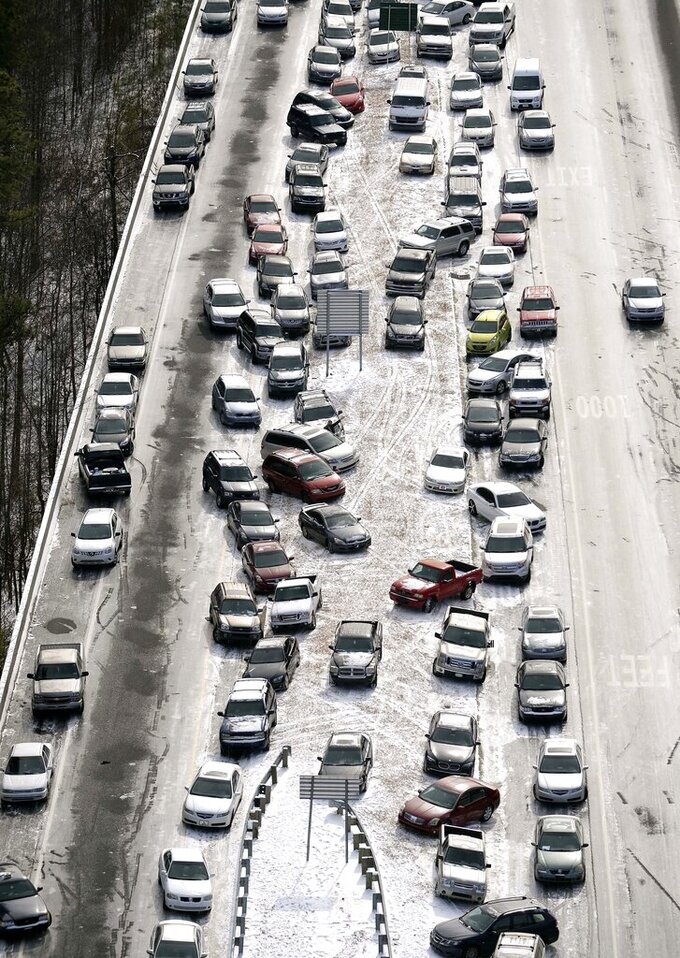 FILE-In this Jan. 29, 2014 aerial file photo, abandoned cars at I-75 headed northbound near the Chattahoochee River overpass are piled up in the median of the ice-covered interstate after a winter snow storm, in Atlanta. A winter storm watch goes into effect at 4 a.m. Tuesday, Jan. 29, for Atlanta, a city known for its ability to grind to a halt even in relatively light snowfalls. (AP Photo/David Tulis, File)

But the southern city was experiencing abnormally frosty conditions as fans arrived for the Super Bowl, with temperatures dropping into the 30s on Tuesday.

New England Patriots fans in town for the game did not panic.

"I grew up in all that snow, and I remember a lot of blizzards up there so this is like nothing unusual," said Stephen Knefel, who grew up Salem, Massachusetts. "It didn't faze me at all — it's just part of everyday life up in New England."

Patriots' coach Bill Belichick was holed up in the team's hotel downtown, and was oblivious to the weather conditions.

"I haven't been outside of this building today," he said during a Tuesday afternoon news conference at the Hyatt Regency on Peachtree Street. "There could be 8 feet of snow out there, it could be 95 degrees — I have no idea."

Some snow from the feared storm did fall Tuesday in Georgia's northwest corner, but it was sweater weather during Atlanta's morning commute. The shoes of office workers made crunching sounds on downtown sidewalks, where road salt caught the light from outdoor video boards set up for the Super Bowl and reflected shades of blue, red and green.

Ultimately, precipitation from the storm front proved negligible for Atlanta. The plunging temperatures jolted the city, though: It was 50 degrees before dawn and was expected to reach the 20s by Tuesday evening, National Weather Service Meteorologist Sid King said.

Atlanta takes even a threat of icy weather seriously after enduring its infamous "snow jam" five years ago, when cars, trucks and school buses became marooned for hours on the southern city's freeways.

"It's very similar to what we saw in 2014 where the roadways will not have time to dry off before the moisture or precipitation on them refreezes," Kemp said Monday. "And that's when you have black ice, and that's what causes wrecks, which causes gridlock and public safety issues, injuries."

Road crews sprayed liquid salt on north Georgia's major interstates, state routes and overpasses, including routes that the New England Patriots and Los Angeles Rams must use to travel to and from practice venues.

"They were showing all kinds of pictures on TV from 2014 when everyone got stuck," Wales said as she toured Super Bowl exhibits at the Georgia World Congress Center.

Sunday's Super Bowl will be played in downtown Atlanta in Mercedes-Benz Stadium, and officials have promised to open its roof if weather permits.

Past Super Bowl weeks have been marred by wintry weather. The week before Green Bay defeated Pittsburgh in 2011, ice coated the roads in Arlington, Texas, and tumbled from the roof of Cowboys Stadium, hurting six workers on the ground.

And in 2000, the St. Louis Rams and Tennessee Titans arrived in Atlanta shortly after an ice storm froze traffic. Both teams had to practice outdoors in the biting cold, since the Georgia Dome, later demolished, was being used for Super Bowl pregame and halftime rehearsals. The Rams wore winter jackets and thermal underwear.