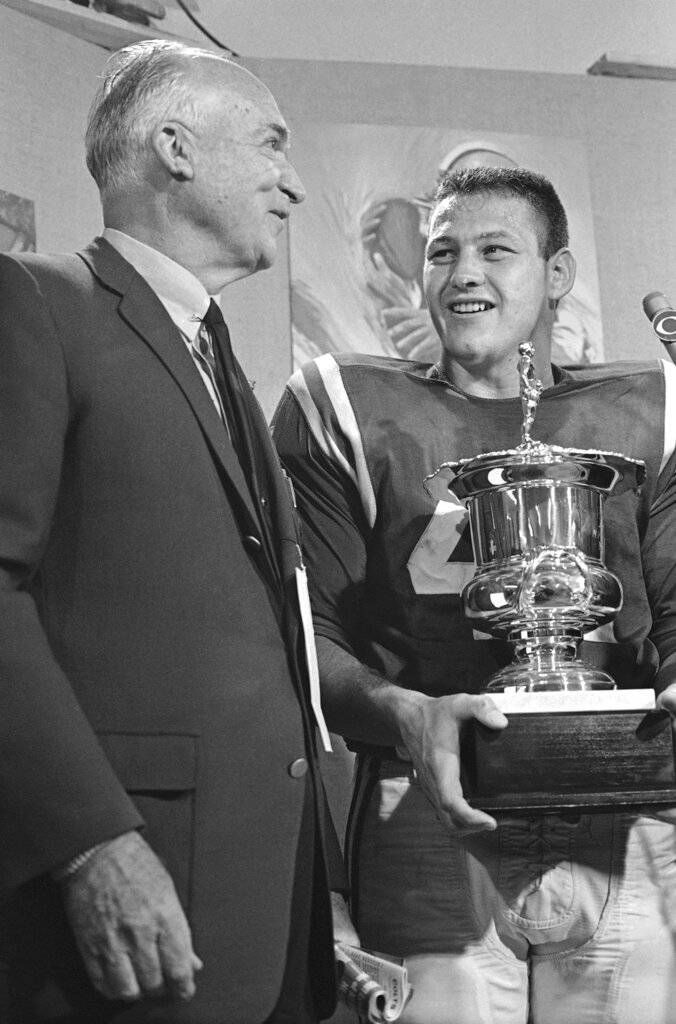 FILE - Van C. Kussrow, left, from the Orange Bowl Committee, presents Baltimore Colts quarterback Tom Matte with the Most Valuable Player trophy after the Colts defeated the Dallas Cowboys 53-3 on Jan. 9, 1966, in Miami. Matte, who spent his entire 12-year NFL career as a gritty running back for the Baltimore Colts _ except for a star turn for three games in 1965 as their quarterback _ has died. He was 82. The Baltimore Ravens confirmed Matte's death during coach John Harbaugh's news conference Wednesday, Nov. 3, 2021. No details were provided.(AP Photo/File) 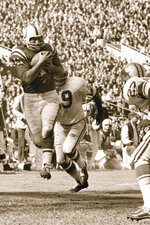 Tom Matte, who spent his entire 12-year NFL career as a gritty running back for the Baltimore Colts — except for a star turn for three games in 1965 as their quarterback — has died. He was 82.

“I just want to start off with condolences to the Matte family. Tom Matte passed away,” Harbaugh said. “We have a special bond. My mom and Tom Matte went to high school together.”

After scoring three touchdowns to carry Baltimore past Cleveland in the 1968 NFL championship game, Matte became the first player to top the 100-yard rushing mark in a Super Bowl, totaling 116 yards in a huge upset loss to Joe Namath and the New York Jets. He earned a championship ring with the 1970 Colts despite being sidelined with an injury for most of the season.

Although he rushed for 4,646 yards, caught 249 passes for 2,869 yards and scored 57 touchdowns, Matte spent most of his time with the Colts operating in the shadow of future Hall of Famers Johnny Unitas, Lenny Moore, Raymond Berry and John Mackey.

“I was sort of the jack of all trades and master of none,” Matte said. “I wasn’t the superstar by no means.”

Matte was drafted seventh overall by Baltimore in 1961 after showing more prowess at running than passing as Ohio State’s quarterback in the single-wing offense run by coach Woody Hayes. The Colts had Unitas throwing the ball, so Matte’s job during his first five NFL seasons mostly involved taking handoffs and catching short passes.

Late in the 1965 season, however, Matte was called upon to show his skill running the offense following injuries to Unitas and backup quarterback Gary Cuozzo.

Wearing his customary No. 41 jersey and making calls in the huddle off a wristband that listed the plays -- an accessory that still resides in the NFL Hall of Fame but was unusual for that era -- Matte helped the Colts beat the Rams 20-17 in the season finale. Matte threw only two passes, both incomplete, but rushed for 99 yards on 16 carries to thrust Baltimore into a tie for first place with the Green Bay Packers in the Western Division.

In the playoff at Green Bay to decide which team would advance to the NFL championship game, Matte completed 5 of 12 passes for 40 yards and ran for 57 yards on 17 carries in a 13-10 loss. The Packers forced overtime with a field goal late in the fourth quarter, a kick the Colts contended sailed wide of the uprights.

“Think about it,” Berry said. “We came within a whisker of playing for the world championship with Tom Matte at quarterback. That’s one of the darnedest things to happen in the history of football.”

Matte closed the season by earning MVP honors in the now defunct Playoff Bowl, a matchup between the second-place teams from each conference. Matte orchestrated a 35-3 rout of Dallas, throwing for 165 yards and two touchdowns.

Previously as a pro, Matte had occasionally displayed his skill as a passer after taking a pitch. Against Dallas, he made things happen after taking the snap from center.

“A lot of our passes today were the halfback option,” he said after the game. “The only difference was that I ran them from quarterback.”

The 6-foot, 214-pound Matte was a grinder as a running back. His straight-ahead, bullish style didn’t register many style points and earned him the nickname “Garbage Can.” Though he never had a 1,000-yard season, Matte rushed for 909 yards with 11 touchdowns in 1969, a 14-game season, in addition to catching 43 passes for 513 yards and two scores.

Thomas Roland Matte was born in Pittsburgh on June 14, 1939. His father played hockey for the Detroit Cougars, who eventually evolved into the Red Wings.

Matte loved hockey but earned accolades at Ohio State for football. He preferred being a running back, but in the 1959 opener against Duke, Matte took over at quarterback after the starter was injured and the backup failed to move the team.

The Buckeyes trailed 13-7 before Matte capped a 63-yard drive with a 22-yard touchdown pass in the waning minutes for a 14-13 victory.

“I said, ‘I don’t want to play quarterback.’ I had small hands and throwing a spiral was hard enough for me to do,” Matte said. “He says, ‘Well, we don’t like to throw the ball anyway.’ We always had that theme of three yards and a cloud of dust.”

Hayes was so impressed, he made Matte the starter in 1960, and the senior responded by leading Ohio State to a 7-2 record. On the day of the 1961 NFL draft, however, the Colts made it clear that he was done as a quarterback -- except in case of emergency.

Matte was selected to the Pro Bowl in 1968 and 1969. He ended his career following a 1972 season in which he played in only six games.

After his retirement, Matte was a color analyst for Baltimore Ravens radio broadcasts from 1996 to 2005.

“Tom was one of this community's heroes,” Ravens owner Steve Bisciotti said in a statement. “I remember being so excited to meet him at Colts training camp when I was a kid. The way he embraced us was truly special. Many years later, when the Ravens came to Baltimore in 1996, it was amazing to then see our team embrace him.”