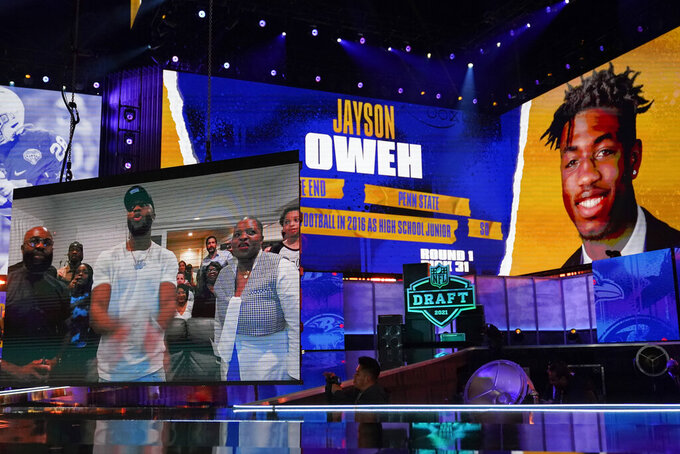 Images of Penn State defensive lineman Jayson Oweh are displayed after he was chosen by the Baltimore Ravens with the 31st pick in the first round of the NFL football draft, Thursday April 29, 2021, in Cleveland. (AP Photo/Tony Dejak)

BALTIMORE (AP) — The Baltimore Ravens have Super Bowl aspirations, and they feel even better about their chances after their work in this year's NFL draft.

“We just tried to pick good players, guys that could do multiple things, guys that fit us personality-wise,” general manager Eric DeCosta said. “We tried to pick smart, tough competitive guys. Quite honestly, if we had a choice between two players and they were equal talents, we always defer to the guy who lives like a Raven, so to speak.”

The Ravens filled two areas of need in the first round by selecting wide receiver Rashod Bateman with the 27th overall pick and Penn State defensive end Odafe Oweh at No. 31, a selection acquired from the Chiefs for offensive tackle Orlando Brown Jr.

Bateman should help Baltimore's beleaguered passing attack. The Ravens ranked last in the NFL last season in yards passing, averaging 171.2 per game. Baltimore also attempted the fewest passes in the league with 406.

The addition of Bateman gives quarterback Lamar Jackson another downfield threat. Bateman has versatility and will have an opportunity to compete for a starting job.

“Obviously, I look up to Lamar a lot,” Bateman said. “I’m just excited to get to work with him.”

The Ravens also had a need for a pass rusher after losing three key players in free agency — Matt Judon (Patriots), Yannick Ngakoue (Raiders) and Jihad Ward (Jaguars). While Oweh did not manage a sack last season, he’s a disruptive player who can have an immediate impact in other ways.

“I knew that people who really understood and watched football understood what I was doing out there,” said Oweh, who had seven sacks over his three-year collegiate career. “I was very disruptive and caused a lot of havoc. I was very stout in the run game.”

The Ravens added Georgia guard Ben Cleveland with the 94th overall pick and then selected SMU cornerback Brandon Stephens at No. 104.

Cleveland, listed at 6-foot-6 and 343 pounds and nicknamed “Big Country,” will get a chance to compete for a starting job, coach John Harbaugh said.

“I fell in love with the coaching staff,” Cleveland said. “I think it’s going to be a great fit for me.”

Stephens began his collegiate career as a running back at UCLA before transferring to SMU and transitioning to defensive back. He’s expected to make an impact on special teams, while continuing his development, possibly at safety.

“I pride myself in playing multiple positions,” Stephens said. “I played corner, nickel and safety. So, wherever the team needs me to play, I’m willing to play.”

Baltimore added its second wide receiver of the draft when it grabbed Oklahoma State’s Tylan Wallace at No. 131. The Ravens have seven players at wide receiver capable of making the final roster, creating competition for training camp.

The Ravens made their first trade of the draft when they sent the 136th and 210th picks to the Cardinals for the 160th pick and a 2022 fourth-rounder. The Ravens used that 160th pick to add another cornerback, Shaun Wade, the Big 10 defensive back of the year from Ohio State.

“I know I have first-round talent. It’s just putting it on the field,” Wade said.

Baltimore added its second pass rusher of the draft when it took Notre Dame’s Daelin Hayes with the 171st pick. With their final selection at No. 184, the Ravens added offensive versatility with Michigan fullback/tight end Ben Mason.

Baltimore still has a need at right tackle after trading Brown to the Chiefs. However, DeCosta is confident the team has plenty of time to find Brown’s replacement.

“We have some guys that we think are going to compete right now at the right tackle spot,” DeCosta said. “As I learned from my mentor Ozzie Newsome, we don’t have to play games until September. We’re confident we’ll have a right tackle, we’ll have a strong offensive line, the best guys are going to play and we have great competition. We’ll be ready to play when the time comes.”