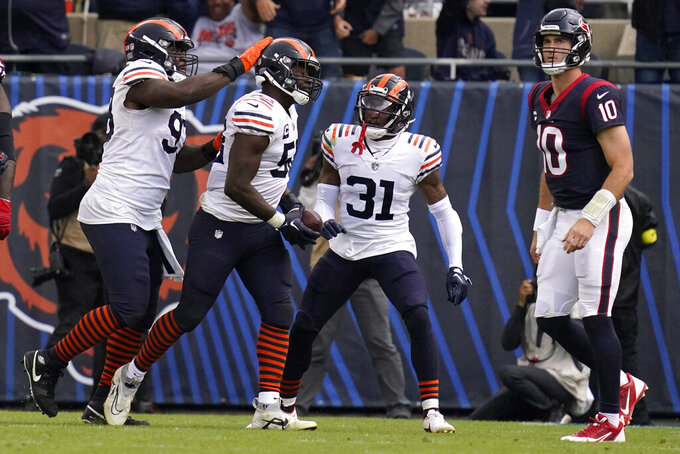 Despite switching to a 4-3 scheme from a 3-4, the Bears quickly seemed to solve one major weakness and closed out two games in the manner Eberflus and defensive coordinator Alan Williams could have anticipated from a more experienced group than they have.

Even with as many as four rookies on the field at times, they have yet to give up a second-half touchdown going into Sunday’s road game against running back Saquon Barkley and the New York Giants.

“I would say that I hope that it’s a byproduct of how we practice, about mental toughness, about the guys’ attitude coming out at halftime,” Williams said. “I hope it’s a reflection of that.

“That we preach stamina, mentally and physically. So I would hope that the way, the process that we go through, that’s a byproduct.”

The Bears struggled with tackling against Green Bay two weeks ago, then did a complete 180 against Houston when they held the Texans to 22 second-half yards rushing.

“I think guys were just more focused coming off the (Packers) loss,” defensive end Robert Quinn said. “It sends, I guess, an uneasy feeling. I’m speaking for myself, but I think the guys were just a lot more focused in, trying to do their job perfectly and play together. And I think it definitely showed up, in tackling and all that. So guys are just working their craft and trying to perfect it.”

Stopping the run became a matter of pride after Green Bay ran for 203 yards against them.

Eberflus pointed to a key third-quarter tackle for a 3-yard loss Roquan Smith made on third-and-1 at the Bears 2 against Houston’s Dameon Pierce as an example of the type of run-stopping he wants to see. It was a classic textbook tackle, wrapping up at the hamstring.

Maintaining this success against Barkley will be no simple task. He is second in the league in rushing with 317 yards after two injury plagued seasons

“He’s explosive,” safety Eddie Jackson said. “He’s one of those running backs I feel like is very rare because he can run full speed and then change direction with the blink of an eye and not slow down.

“You’ve just got to be in the right leverage. Lower body, you’ve got to have the right aim point. He’s a stronger runner. He’s tough.”

It was Jackson who made the tackle in 2020 at Soldier Field when Barkley suffered a torn ACL.

“I kind of hit him up high, not on the leg,” Jackson said. “I caught him in a weird angle or something. I hated to see that happen.

“I went through an ACL, too, and really after two years is when you really feel it because it takes a while. After that, you feel back normal because the first year you’re overcompensating. It’s about the right timing now for him, so it’s no surprise he’s running so strong.”

If the Bears' defense is to continue closing out opponents, like against Houston and San Francisco, then it will be back to the simple formula of fundamental tackling.

“I felt like we did that (last week), but I feel like we definitely could be better with that so this week here will be another great opportunity,” Smith said. “You know they’re going to try to come run the ball with Saquon, who wouldn’t?

“So it will be a great opportunity for us to showcase that we actually got down the fundamentals.”

NOTES: The Bears practiced Wednesday and Thursday without starting cornerback Jaylon Johnson due to a quad injury, and starting running back David Montgomery because of an ankle injury suffered against Houston.