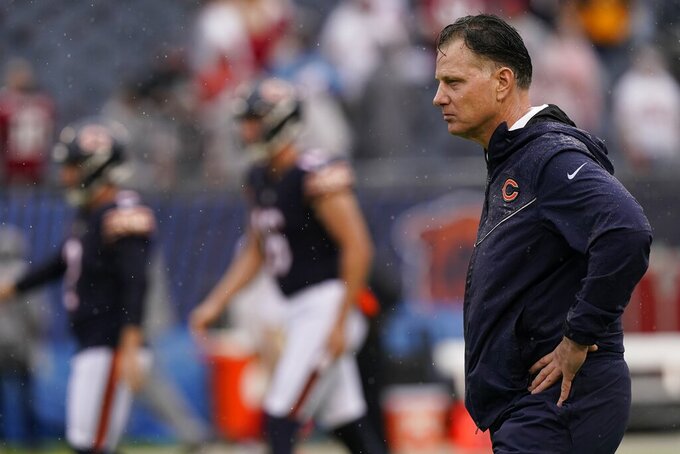 LAKE FOREST, Ill. (AP) — As the Chicago Bears regrouped in the locker room following a half that was as ugly as the weather at Soldier Field, quarterback Justin Fields noticed something. Offensive coordinator Luke Getsy was smiling.

“It’s confident,” he said. “That’s one thing that I take from him, he’s a very confident guy. I think he gives the rest of the guys confidence.”

Getsy's confidence and Fields' steadiness helped the offense get going in the second half and all the Bears to make a big splash in the season opener by beating the San Francisco 49ers 19-10 in coach Matt Eberflus' debut. After taking out a team with Super Bowl hopes in heavy rain, they'll try to pull off another surprise this week when they visit Green Bay.

A rare win over Aaron Rodgers and the Packers would put Chicago two games ahead of their rivals. The three-time defending NFC North champions opened with a loss at Minnesota.

Getsy knows Rodgers and the Packers well, having spent the past three seasons as their quarterbacks coach and seven years on their staff. That could work to the Bears' advantage, and they'll take any edge they can get.

Their offense could certainly use a boost.

The Bears didn't cross midfield until their sixth and final possession before halftime. That drive ended with a punt after an unusual penalty involving the use of a towel knocked them out of field goal range.

But the Bears kept their poise and adjusted at halftime. Now they just need a complete game from their quarterback.

Fields came through with some big plays on what was overall a rough start to his second season. The former Ohio State star was 8 of 17 for 121 yards with an interception and had trouble at times gripping the ball. But in the second half, he threw two touchdown passes.

Fields, the No. 11 draft pick last year, helped change the complexion of the game with Chicago trialing 10-0 in the third. As two defenders closed in, he rolled to his left and saw Dante Pettis wide open on the other side of the field. Fields lofted the ball to his receiver, who took it in for a 51-yard touchdown. He also hit Equanimeous St. Brown for an 18-yarder early in the fourth to give the Bears a 13-10 lead.

“Mental toughness. He was able to move all those things aside, figuring it out how he was going to grip the ball better, how he was going to operate and then figure out the game as the game went on, and move the ball down the field,” Eberflus said. "And that’s what to me is outstanding, what an outstanding thing for a young quarterback to have that mental toughness, all of those things going on and to be able to laser-like focus in and get the job done.”

NOTES: OL Alex Leatherwood was placed on the non-football illness list and will miss at least four weeks. The Bears claimed Leatherwood off waivers two weeks ago after the 2021 first-round draft pick was let go by the Las Vegas Raiders. He was inactive for the season opener. ... The Bears signed OL Michael Schofield on Wednesday.