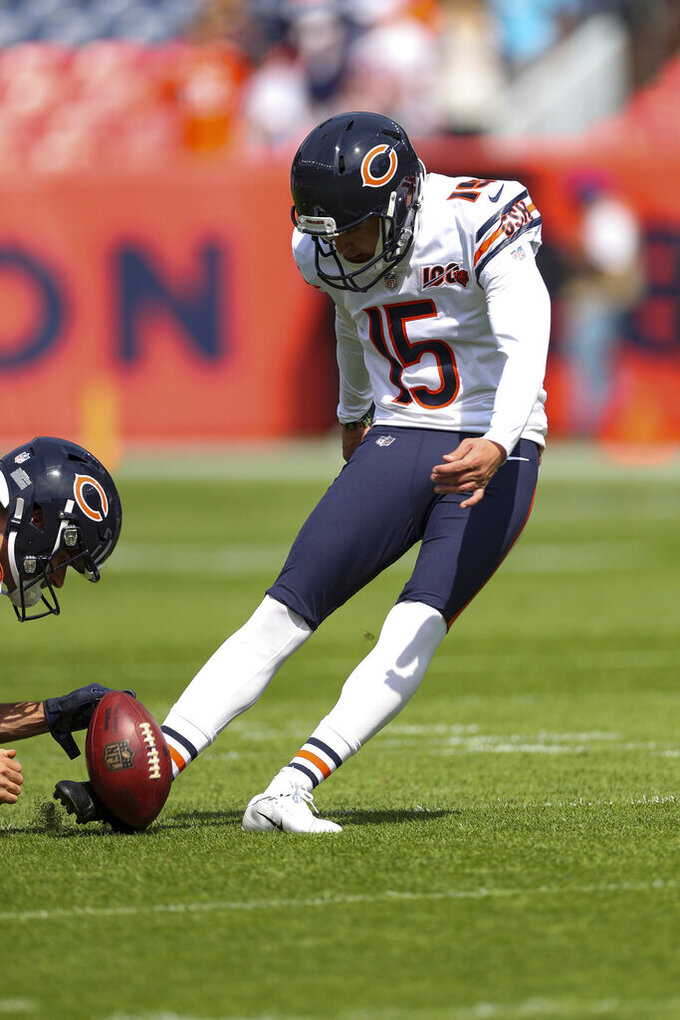 Chicago Bears kicker Eddy Pineiro (15) kicks a field goal during warm-ups in an NFL game against the Denver Broncos, Sunday Sept. 15, 2019, in Denver. The Bears defeated the Broncos 16-14. (Margaret Bowles via AP) 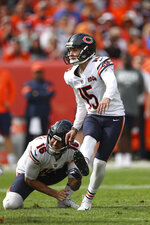 Pineiro will go into Monday night's game in Washington questionable on the injury report because of right knee trouble.

Pineiro was hurt Friday, with coach Matt Nagy saying it happened during weight lifting. Pineiro didn't practice Friday, but did kick on a limited basis at Saturday's practice.

"Especially after what just happened with us and what we've been through (with kickers), and what he just did this past weekend, it's like we're on a roll here and then all of a sudden something crazy like this happens," Nagy said. "But I try to stay positive with it and I think we'll be OK. We've just got to see how it goes the next couple days."

The Bears had one other player who was a surprise on the injury report. Safety Eddie Jackson came up with a knee injury in Friday's practice and was able to go Saturday only on a limited basis. He also is questionable.

Chicago brought in nine kickers at one point in the spring, traded a seventh-round draft pick for Pineiro, and then he beat out Elliott Fry to win the kicking job. Pineiro is 4 for 4, including last week's winner and another 52-yarder against Denver.

"I'm going to be on the cautious side with him and we'll just kind of feel out the pain part and if it's something that's going to affect him, then we'll have a decision to make," Nagy said. "If not . hopefully he'll be OK."

Pineiro didn't think it was serious at first, according to Nagy.

"Just thought that it was something that was minor and I think as the time has gone by and then going out there today he just felt it a little bit," Nagy said. "So we're just going to pull back and see where it's at and be optimistic and try to do everything we can to make sure that we're taking care of it, the pain."

And if Pineiro can't kick?

"That's a good question," Nagy said. "We've got to work through that. I know (punter) Pat O'Donnell has some experience. But we'll see how this thing goes. I don't want to rush to judgment yet. That's not where we're at."

At least the Bears know a lot about some of the potential emergency kickers available.

"There are a lot of different scenarios that could happen, but I'm not going down that route," Nagy said. "I feel good that things will be OK. If they're not, then we just have to have a contingency plan when that time comes, and if that's something that we've got to do something different, then we'll do that."

Jackson's injury is different than the one he had earlier in the week to go on the injury report. He had a shoulder problem then, but went through a full practice on Friday and then suffered knee soreness afterward. He practiced only on a limited basis Saturday.

Defensive end Bilal Nichols is out for the game due to the broken hand suffered last week.

Also questionable for Monday are guard Kyle Long (hip) and tight end Trey Burton (groin). Long was held out of Saturday's practice and Burton participated on a limited basis.