Bears load up with 11 draft picks, including 8 on final day 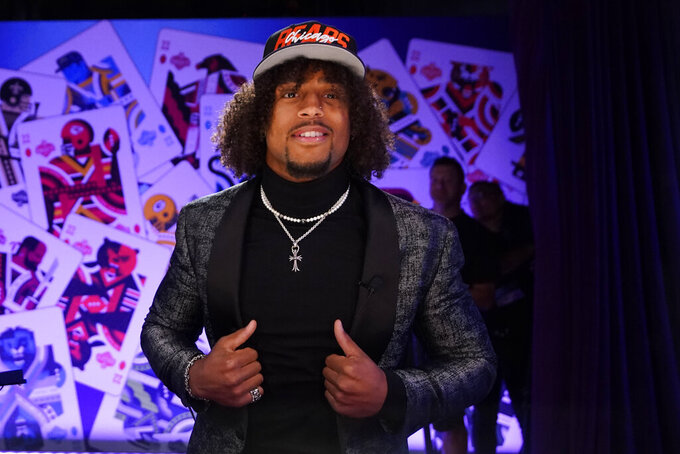 Washington cornerback Kyler Gordon puts on a hat after being selected by the Chicago Bears during the second round of the NFL football draft Friday, April 29, 2022, in Las Vegas. (AP Photo/John Locher)

LAKE FOREST, Ill (AP) — The Chicago Bears have plenty of holes to fill on their team and they used the draft to help out in a big way.

How many of them will actually help turn around the struggling franchise remains to be seen. But if nothing else, new general manager Ryan Poles was a busy man.

He made four trades Saturday to give the Bears a total of eight picks on a day that began with them owning just two fifth-rounders and a sixth-rounder. He turned his attention mainly toward the offensive line after focusing more on the secondary the previous day, and grabbed four blockers to help protect quarterback Justin Fields, starting with Southern Utah State tackle Braxton Jones in the fifth round at No. 168.

“Anytime you have more ammunition, the better in terms of getting hits,” Poles said. “That was kind of the thought process.”

It's up to Poles and new coach Matt Eberflus to turn around the franchise after Chicago went 6-11 last season and missed the playoffs for the ninth time in 11 years.

The Bears were at least active in the draft, considering they had no first-round pick. They traded it to the New York Giants last year to move up for Fields.

The Bears believe they got a potential starter opposite cornerback Jaylon Johnson when they took Washington's Kyler Gordon in the second round at No. 39 overall and added to the secondary again when they grabbed Penn State safety Jaquan Brisker at No. 48. The Bears also got a receiver in the third round when they grabbed Tennessee's Velus Jones at No. 71 on Friday.

The attention shifted more toward protecting Fields on Saturday.

After taking Jones with their first pick of the day, the Bears drafted three more offensive linemen. They took San Diego State's Zach Thomas (186) and Illinois center and suburban Hinsdale product Doug Kramer (207) in the sixth round. And in the seventh round, they went with Southern’s Ja’Tyre Carter at 226.

Chicago used a sixth-round pick (203) on Baylor running back and return specialist Trestan Ebner — the Big 12 Special Teams Player of the Year.

The Bears didn't ignore the defense and special teams on the final day. The Monsters of the Midway grabbed edge rusher Dominique Robinson of Miami (Ohio) in the fifth round at 174 and California defensive back Elijah Hicks in the seventh round at 254. Chicago drafted North Carolina State punter Trenton Gill at 255.

Eberflus was looking forward to working with Gordon and Brisker.

“They bring playmaking ability into your secondary, and that’s a huge piece,” he said. “And they’re big, long players. And big, long players, they create takeaways, and they do a great job of playing the ball. And that’s what we’re excited about.”

A high school quarterback who spent his first three years at Miami (Ohio) as a wide receiver before moving to edge rusher in 2020, Robinson realizes he has room to grow.

“I consider myself to be really, really raw,” he said. “I’ve been working on some new stuff. I was a one-dimensional player. I only had one move throughout college, so I wanted to add some power. I wanted to add some things that come off of power, and I think I’ve been doing that pretty well on a consistent basis during this off time.”

Though the 6-foot-4, 253-pound Robinson wasn't a starter last season, he was selected third-team, all-MAC by the conference's coaches with 29 tackles and 4 1/2 sacks.

It was quite a weekend for the Thomas family of Carlsbad, Calif.

One day after his brother Cameron, a defensive end also from San Diego State, was picked by the Arizona Cardinals in the third round, Zach Thomas got the call from Chicago. The two watched the draft together.

“I would sum it up with one word — exciting,” he said. “Just getting to see him go yesterday and celebrate and then wait a little bit today and do the same thing all over again, it's been unreal.”

He also made two starts at right guard in 2018 and played the first three games that season before suffering a season-ending knee injury.

“Growing up at that position in Chicago, that was the guy you were gonna look at because you knew he was the toughest guy on the field,” Kramer said. “He was gonna get after people. Every young kid in Chicago is trying to emulate what he did on the field.”