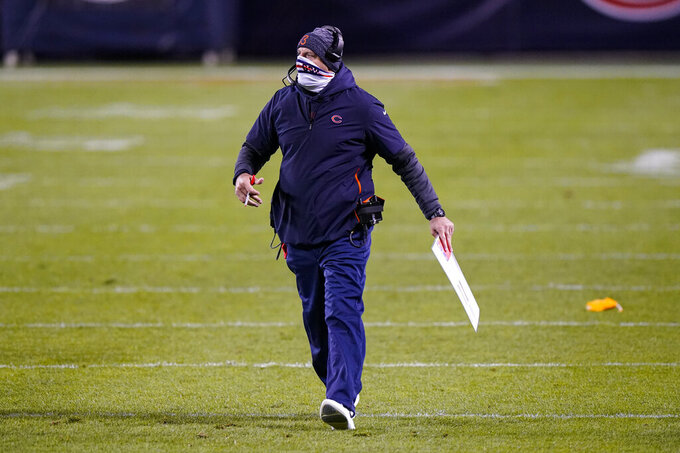 Chicago Bears head coach Matt Nagy walks onto the field after a unnecessary roughness penalty in the second half of an NFL football game against the New Orleans Saints in Chicago, Sunday, Nov. 1, 2020. (AP Photo/Nam Y. Huh)

CHICAGO (AP) — The Chicago Bears passed the halfway mark of their season with three straight losses and one broken offense.

That just might be enough to convince coach Matt Nagy to relinquish play-calling duties.

He left open the possibility Monday, a day after the struggling offense delivered another rough performance in a 24-17 loss at Tennessee on Sunday.

“I’m looking at all that right now,” Nagy said. “I meant what I said (Sunday). When we’re where we’re at right now as an offense, and struggling the way we are, you have to be able to look at everything, including myself. So we’ll see where that goes. We play Monday and we will make the best decision possible here. I think that that’s a part of some of the decisions that we look at, for sure.”

The Bears (5-4) open a three-game stretch against NFC North foes with a Monday night matchup against Minnesota at Soldier Field. And with a loss, they would match their worst skid in Nagy's three seasons; they also dropped four in a row last year.

They're struggling to find solutions on offense. And things haven't gotten better since Nick Foles replaced Mitchell Trubisky at quarterback during a Week 3 win at Atlanta.

Nagy said a few weeks ago he was open to the idea of handing off play-calling duties. But he wasn't ready then to take that step.

If he does pass them to offensive coordinator Bill Lazor or another assistant, he's not sure he will go public with an announcement.

“The part that I love about our staff is that they’re very positive,” Nagy said. “They’re about fixing problems. And then we’re all very honest, too. So that’s what we’re gonna do.”

The defense. Chicago's defense ranked ninth overall and eighth against the pass through Sunday. The Bears have been a bit shaky against the run, though they did hold Titans star Derrick Henry to 68 yards on Sunday.

The offense. The Bears hired Nagy prior to the 2018 season to fix their broken offense. But it's in pieces at the moment.

The Bears were down three starters on the line against Tennessee, which only added to their long list of issues. That didn't make things easier for Foles, who has seven interceptions and 10 touchdown passes.

LB Khalil Mack. The three-time All-Pro has 6 1/2 sacks and is on pace to get back into double digits after a four-year run ended last season. He had 8 1/2 in 2019, his lowest total since he had four as a rookie with Oakland in 2014.

Trubisky. Once the prize of the franchise, Trubisky could be on his way out.

The player that general manager Ryan Pace traded up a spot to draft with the No. 2 pick in 2017 — while Patrick Mahomes and Deshaun Watson were on the board — was already on shaky ground coming into the season.

The Bears made that clear by acquiring Foles from Jacksonville and declining their fifth-year option for the 2021 season on Trubisky. Though he opened the season as the starter, he got replaced in Week 3. And on his only snap since then — a short run out of the wildcat formation against New Orleans on Nov. 1 — he injured his right (throwing) shoulder when he was tackled.

About the only good news for Trubisky lately is he won't have to go on injured reserve.

The Bears could be without starting RB David Montgomery after he left Sunday's game with a concussion. Montgomery leads the Bears with 472 yards on 131 attempts. Trubisky is second with 90 yards. DB Sherrick McManis also broke an index finger against Tennessee.

The Bears also activated backup offensive tackle Jason Spriggs from the Reserve/COVID-19 list on Monday. They also removed from that list defensive back Michael Joseph, who is on injured reserve.

56-7 — That's how badly the Bears have been outscored in third quarter this season. They came away with no points against Tennessee despite outgaining the Titans 135-12 and holding the ball for nearly 13 minutes.

The Bears host NFL rushing leader Dalvin Cook and the Vikings on Monday night. Chicago then has a bye, followed by games at Green Bay and against Detroit at home.