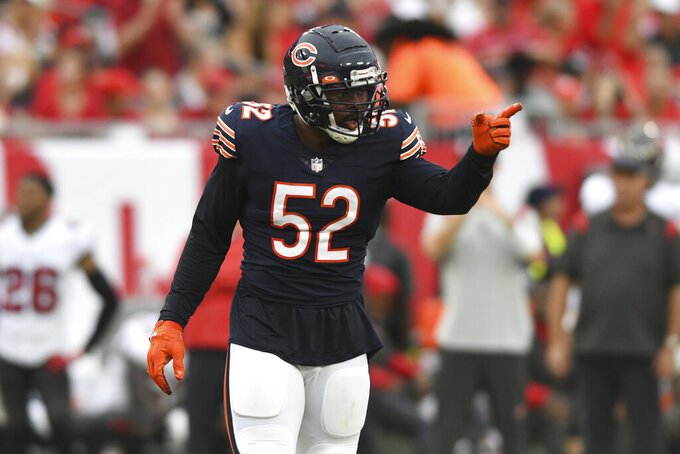 FILE - Chicago Bears outside linebacker Khalil Mack (52) during the first half of an NFL football game against the Tampa Bay Buccaneers Sunday, Oct. 24, 2021, in Tampa, Fla. The Chicago Bears will once again be without star linebacker Khalil Mack, though they might have running back David Montgomery available when they visit the Pittsburgh Steelers on Monday night Nov. 8, 2021. (AP Photo/Jason Behnken, File)

Mack will have surgery next week, but Nagy did not specify the nature of the foot injury. Mack's season ends with six sacks.

Mack’s injury has been a problem since the Bears played Cleveland in Week 3, but he tried to play through it until going to the sidelines for the Oct. 31 game against San Francisco, and hasn't returned.

“I know with him, it’s been the last several weeks trying to get right,” Nagy said. “And I think we did everything as far as trying to attack it the right way with him.

“I know he’s put a lot of time and energy in trying to get back and see where things are at. This is where we’re at.”

Mack played through the injury against the Raiders, the Packers and then Oct. 24 against Tampa Bay.

The injuries are piling on the Bears defense as they will not have defensive end Akiem Hicks for the Baltimore game due to an ankle injury, and they also moved inside linebacker Danny Trevathan on Friday to injured reserve as a result of a knee injury.

There is no doubt the Mack injury is the biggest, however.

“It’s stuff that he’s been dealing with and we’ve been for weeks, he’s trying to get through it,” Nagy said. “Through him and our doctors and everybody else, this is part of the game. You try to handle things the right way.

“I know he’s frustrated because he’s such a competitor, but this is the best thing for him and the best situation to be able to help him out and get him fixed.”

Chicago's defense has dropped from near the top early to 12th in the league. They had been sack leaders, but are now tied for eighth with 25.

Defensive lineman Eddie Goldman called it case of everyone else picking up the slack in the pass rush.

The Bears also have another injury issue for Sunday’s game as wide receiver Allen Robinson has not practiced this week and is listed doubtful to face the Ravens due to a hamstring injury suffered Nov. 8 against Pittsburgh.

Robinson hasn’t missed a game since 2018.