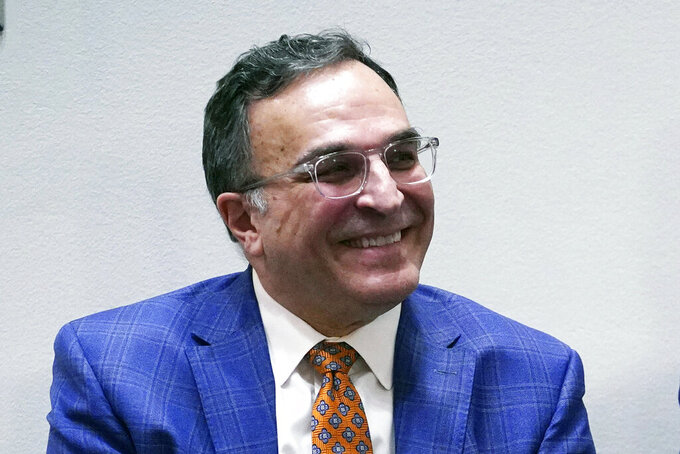 ARLINGTON HEIGHTS, Ill. (AP) — The Chicago Bears say they will need taxpayer assistance if they are going to construct an enclosed suburban stadium that could host Super Bowls, Final Fours and College Football Playoff games and anchor a surrounding entertainment and residential complex.

Chairman George McCaskey said the team would not seek public funding to build the stadium itself if the Bears complete the purchase of a 326-acre site in Arlington Heights, Illinois, and decide to move from Soldier Field. But they would need help to complete the rest of a multibillion-dollar project.

“My family and I are not real estate developers,” McCaskey said Thursday. “We are not financiers. We are privileged to own a beloved football team that is an important community asset. We take that responsibility to heart. It is our life’s passion. We do recognize what might be a once-in-a-lifetime opportunity.”

The Bears presented their vision at a presentation to the community in a high school gym in Arlington Heights. They also fielded questions submitted by attendees.

McCaskey said he wasn't sure how much the stadium would cost. President and CEO Ted Phillips, who is retiring after the season, said he does not envision the Bears building one with a retractable roof. He also said capacity has not been determined, though it would be greater than at Soldier Field, which seats an NFL-low 61,500.

The Bears said more specific details about the stadium would be revealed later. The focus Thursday was on the development of the remainder of the property. Phillips said the project would cost nearly $5 billion and serve as an “economic engine” for the county, region and state “365 days a year.” A casino is not part of the plan.

They discussed access from the nearby highway, commuter rail station and bike and walking paths. Closing streets on event days is also part of the vision.

“We want to be good neighbors,” McCaskey said.

But without taxpayer help to build the necessary infrastructure such as roads and sewers needed to develop the site, he said the project “will not be able to move forward.”

“If this project is completed, what do we get?” McCaskey added. “A world-class home for the Chicago Bears after a more than 100-year search. What do you get? A world-class facility, parks, housing, restaurants, hotel and other community improvements — and 365-days-a-year economic impact from one of the largest construction projects in Illinois history.”

The Bears entered a purchase agreement for the site of the former Arlington International Racecourse about 30 miles northwest of Soldier Field after owner Churchill Downs reached out to them about buying the land. Phillips said the deal would likely close late this year or in early 2023. He also said the Bears would not consider renovations to Soldier Field while they are under contract for the site, drawing cheers from the crowd in a gym that was less than half full.

McCaskey said the Bears, under his grandfather and franchise founder George Halas, tried to purchase the land in the 1970s. Even if a deal goes through this time, he insisted there's no guarantee the Bears would develop the site. And if they did, they would need taxpayer help.

The Bears also said this week the project would generate $16 million in annual tax revenue, in addition to property taxes for Arlington Heights, $9.8 million for Cook County, and $51.3 million for the state of Illinois.

“This is a lot more than just a stadium. It's a stadium-anchored development,” Phillips said.

Soldier Field has been the Bears' home since 1971. The team played at Wrigley Field from 1921 to 1970, and if a new stadium is constructed, the franchise would have its name on the mortgage for the first time.

If the deal does not go through?

“Right now, we don't have a Plan B,” Phillips said.

Soldier Field, the lakefront stadium owned by the Chicago Park District, underwent a $690 million transformation in 2002 that forced the team to play home games at the University of Illinois and ultimately led to the loss of its National Historic Landmark designation.

The interior was demolished, replaced by a flying saucer-like, glass-dominated structure cantilevered over the famous Greek and Romanesque colonnades. The clash of styles drew criticism, and the renovation reduced seating for Bears games.

As for a new stadium?

“We have a long way to go,” McCaskey said.