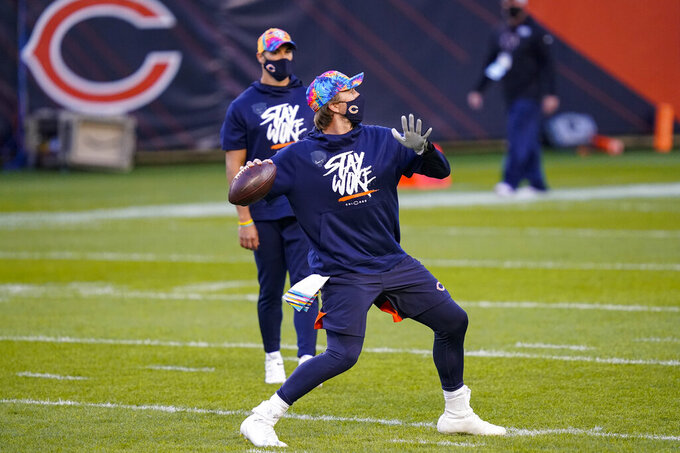 Trubisky injured his right shoulder when he was tackled running the ball on his lone snap in an overtime loss to the New Orleans Saints, coach Matt Nagy said Wednesday.

In his first appearance since he was replaced by Nick Foles during the Week 3 win at Atlanta, Trubisky came on in the first quarter on Sunday. He landed awkwardly on his throwing shoulder, Nagy said, when he was tackled by linebacker Alex Anzalone and jogged off the field.

Nagy also said the pain worsened as the day wore on. He said Trubisky is rehabbing and the Bears aren't sure how long he will be sidelined.

“Mitch has been really, really good throughout this whole process,” Nagy said. “I couldn’t have asked for him to be any better, he’s handled it like an absolute pro, and it doesn’t surprise me one bit. At the same point in time, you know, the position that we are in and that we’ve gone through to get to this point, we also know that using him in different areas and growing with a package with him can be good. And I think that was a start for us right there.”

The Bears traded up a spot to draft Trubisky with the No. 2 overall pick in 2017. But he hasn’t delivered the way they hoped.

He struggled last year and had surgery after the season to fix a partially torn labrum in his left shoulder that added to his difficulties.

The Bears then acquired Foles in a trade with Jacksonville and declined their fifth-year option for 2021 on Trubisky, drafted ahead of Patrick Mahomes and Deshaun Watson.

Trubisky opened the season as the No. 1 quarterback. Foles has started the past five games, but Chicago’s offense continues to rank among the NFL’s worst. And if he gets hurt, the Bears might have to go with veteran Tyler Bray, who hasn't played in a game since he was with Kansas City in 2017.

The Bears (5-3) could also be down four starters on the offensive line as they try to snap a two-game losing streak when they visit Tennessee.

They were already missing two, with center Cody Whitehair (calf) missing the New Orleans game and left guard James Daniels (pectoral) expected to miss the remainder of the season after he was hurt in Week 5 against Tampa Bay.

Right tackle Bobby Massie (knee) was placed on injured reserve and right guard Germain Ifedi on the Reserve/COVID-19 list this week. Nagy indicated Ifedi could be cleared in time for the game.

“I think he can be activated with the rules on Saturday, with the days that he has to be out being the high-risk close contact,” he said.

The Bears also placed Jason Spriggs, who took over for Massie, on the COVID list. And center Sam Mustipher (knee), who made his first career start with Whitehair out, is also injured.

“You hate to see injuries but a lot of times, too, these are where guys get an opportunity and they start, and they do well, and then they play the rest of your career, that’s how you play a lot of times,” Foles said.