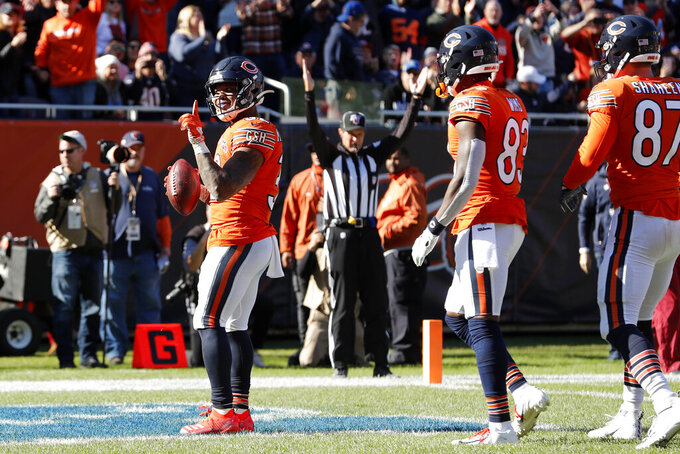 Chicago Bears running back David Montgomery, left, celebrates after scoring on a 4-yard touchdown run during the second half of an NFL football game against the Los Angeles Chargers, Sunday, Oct. 27, 2019, in Chicago. (AP Photo/Charles Rex Arbogast)

CHICAGO (AP) — David Montgomery showed all the reasons why he was one of the top running backs in this year's NFL draft.

A few more carries at the right time, and the Chicago Bears might have won Sunday.

Montgomery broke out with a career-high 135 yards rushing in his seventh NFL game, but he only touched the ball once inside the 20 on Chicago's first three drives to the red zone— part of a day full of curious decisions in a 17-16 loss to the Los Angeles Chargers.

"We were just going with the game," Montgomery said. "Some games are run. Some games are pass. You just go with what works. The play-calling was awesome today. Everybody did their part. The ball just didn't roll in our corner."

One week after Chicago managed just 17 yards rushing on a franchise-low seven attempts in a 36-25 loss to New Orleans, Montgomery had 27 of the Bears' 38 carries. He scored his third career touchdown on a 4-yard run in the third quarter, giving Chicago a 16-7 lead.

Mitchell Trubisky threw an interception and lost a fumble, helping Los Angeles rally. But he scrambled for 11 yards to move the Bears to the Chargers 21 with about 40 seconds left.

Rather than try to move closer, coach Matt Nagy had Trubisky take a knee and called his last timeout with 4 seconds left. Eddy Pineiro then missed a 41-yard field goal as time expired, giving the Chargers the dramatic victory.

Los Angeles played without starting defensive linemen Brandon Mebane and Justin Jones due to injuries, and Chicago looked to take advantage of their absence right from the beginning.

Montgomery rushed for 10 yards on the Bears' first play from scrimmage. He had 12 carries for 85 yards at halftime, including a 55-yarder for the team's first run of at least 50 yards since Jordan Howard's 53-yard rush during a 27-24 overtime win at Baltimore on Oct. 15, 2017.

"Whenever your opportunity comes you've got to try to be ready for it," said Montgomery, a third-round pick out of Iowa State. "I just tried to make sure I took advantage of every opportunity today."

But Chicago was held to four field-goal tries in its four trips to the red zone in the first half. Pineiro hit the right upright on a 33-yarder in the first quarter, and then connected from 22, 25 and 19 yards.

The first three times the Bears drove inside the 20, Montgomery had one carry for a 2-yard loss in the red zone. After his long run in the second quarter, he touched the ball three times inside the 20 and got stuffed on each carry.