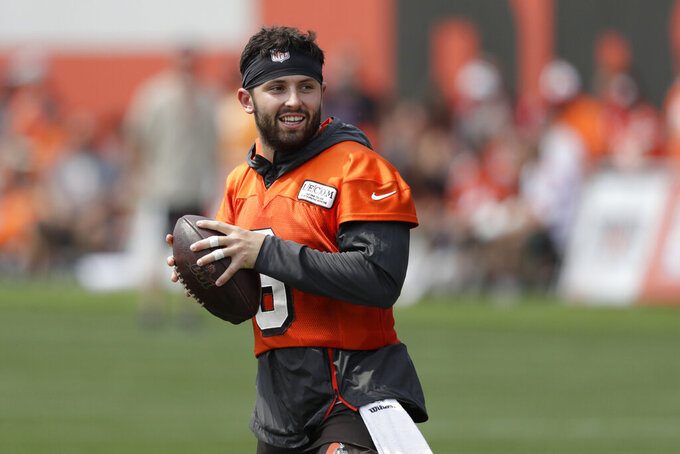 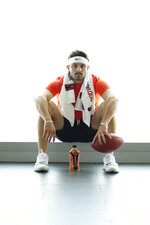 CLEVELAND (AP) — Baker Mayfield's got his hands on another cold beverage. He's not chugging this one.

The Browns' star quarterback, who further endeared himself to Cleveland's fervent football fans by biting into a beer can last weekend and gulping it down while attending an Indians game, has added sports drink BODYARMOR to his growing list of endorsements.

And as for his beer-guzzling moment, which triggered a frenzy on social media and some criticism, Mayfield said it was done in fun and he's not concerned about any negative backlash.

"I'm gonna be me," he told The Associated Press.

He attended the Indians game against the Los Angeles Angels along with his wife, Emily, and some friends. The team asked his permission to be shown on their giant video board at Progressive Field. That's when Mayfield took a swig of a beer in his hand before his buddy tossed him another brew.

Mayfield, who was wearing the jersey of Cleveland shortstop Francisco Lindor, chomped down on the can, and drained it "shotgun" style. He popped out of his seat, pointed at Lindor's name on his back and urged the crowd to get loud.

There were some detractors. But he's not planning to change his ways.

"No, not at all," he said when asked if he worried about criticism. "There's been videos of a lot of guys chugging beers, and I'm just gonna do it my way. I'm going to enjoy it. It's the night before our off day, and I'm enjoying watching the Indians make a final push. That's the thing about it, I'm gonna be me.

"I always have been that and I'm not really worried about anyone's opinion, because when I step into our building and when I go to work, there are priorities that are always intact and so that's why I feel comfortable doing those types of things."

Mayfield said part of the allure of aligning with the company is because Kobe Bryant is a major investor and someone he has admired.

With the Browns expected to do big things this season, Mayfield is in high demand. His business portfolio, which already includes deals with Nike, Nissan, Panini America, will soon include some other major brands.

Mayfield shot several commercials this summer in Los Angeles for a national campaign expected to launch next month before the season kicks off.

As he adds endorsement deals, the 2017 Heisman Trophy winner said he's discerning about companies and products that become partners.

"I'm not just going to do stuff for nickels and dimes here and there," he told AP on an off day from training camp. "It's gotta fit. There have been things all over, but if it's not the right fit, I'm not going to do it for any sort of paycheck — and that's just how it is. That's why BODYARMOR is for the right reasons.

"Being an athlete, it's important to stay hydrated, and what they stand for means even more to me. My story line has been different, not your textbook one, so I'm going to do it my way and not just sort of do a generic deal right out of the gate because I want to get a paycheck.