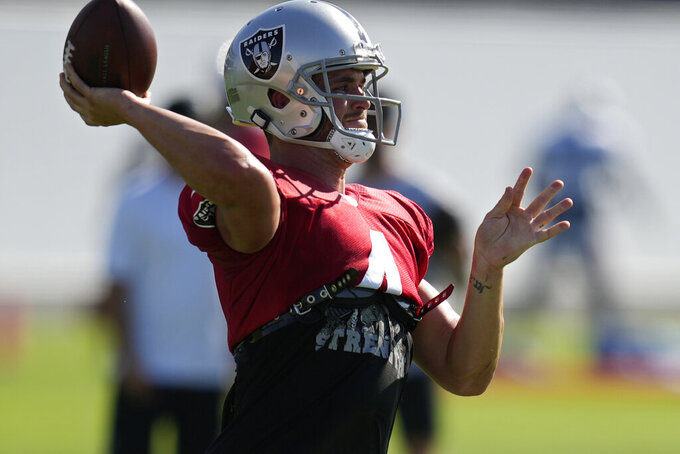 The New England Patriots coach and his longtime assistant, now the coach of the Las Vegas Raiders, brought their teams together Tuesday for the first of two joint practices ahead of Friday's preseason finale.

“We obviously were looking forward to it,” said Raiders quarterback Derek Carr, who hasn’t played in the preseason. “This was an important week for us. Getting these reps is crucial for us.”

New England quarterback Mac Jones had a rough start, going 7 of 14 during 11-on-11 drills and throwing a pair of interceptions to Jayon Brown. But he responded by completing six of his next seven passes, including a touchdown strike to Kendrick Bourne.

“It was great going against somebody else and getting some fresh looks,” Raiders defensive end Maxx Crosby said. “I feel like overall it was a good day and we just gotta be better tomorrow ... especially going against Bill Belichick and their regime. They’re very smart and they’re always trying to give us different looks and slow us down.”

The Patriots had joint practices last week in Foxborough, Massachusetts, with the Carolina Panthers. Tempers flared in those sessions, with four New England players told to leave the field over the two days.

Tuesday's session was much more disciplined, with players exchanging pleasantries and helping each other up from the ground.

“I would say it was great leadership on both sides. They did a great job of making sure that nothing happened as well. Kind of just went out there and everybody just did business, and business was done. I’m proud of my teammates and former teammates as well,” said Raiders running back Brandon Bolden, who spent eight seasons with New England.

“When I was driving over in the bus for practice, I was thinking, ‘I’m going to an NFL practice in Vegas,’” he said. “It’s very exciting coming from Centennial. Not a lot of people from Vegas get to the NFL.”