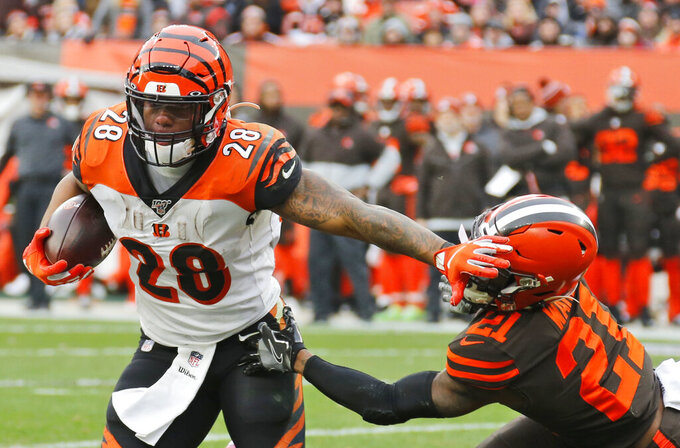 CLEVELAND (AP) — For the first time in what seems like forever, the Bengals couldn't blame the loss on anyone — or anything — but themselves.

A second win was within reach. Cincinnati couldn't grab it.

“There was a lot of things that went into it," said Bengals running back Joe Mixon, who rushed for a career-high 146 yards and scored a touchdown. "All the stuff we can’t control. We all got plays we wish we could take back. Everybody does.”

There was regret from one end of Cincinnati's locker room to the other on Sunday following a 27-19 loss to the Cleveland Browns, who were outgained, outplayed and outsmarted for most of the afternoon, but not outscored.

The Bengals (1-12) posted a season high in total yards (451), rushing yards (179) and won the turnover battle for the first time this season. But they couldn't come out on top in the latest edition of the “Battle of Ohio,” which will be renewed on Dec. 29 in Cincinnati.

Mixon, for one, is already counting down the days until he sees the Browns again.

“We should’ve won that game, but the best thing about it is we get to see them in three more weeks in Cincinnati," Mixon said. "They’ve got to come to us. I’m excited and I can’t wait.”

The post-game stats didn't add up right for the Bengals, who ended a 13-game losing streak dating to last season a week ago by stunning the New York Jets. Cincinnati had 118 more yards than Cleveland, ran 20 more plays, picked up 10 more first downs and had the ball more than nine minutes longer.

“Statistics say 85 percent of the teams that win the turnover battle, win the game,” said defensive end Carlos Dunlap. “We lost, so that's the 2019 Bengals season.”

With their 10th straight division loss, the Bengals are guaranteed finishing last in the AFC North for the second straight season. It's the first time they've done that since 2001-02.

It could have been different, but the Bengals didn't convert good field position and scoring chances into touchdown, settling for four field goals from Randy Bullock.

Cincinnati had several chances in the fourth quarter, but was stopped on a fourth-and-goal and then had a replay review reversed.

Down 24-16, the Bengals held the ball for more than seven minutes while methodically driving to Cleveland's 4-yard line. After Andy Dalton threw an incomplete pass on third down, first-year coach Zac Taylor decided to go on fourth down.

He called a draw for Dalton, who never had a chance to get to the end zone and was stopped at the 2.

“We had the look that we wanted for it,” said Dalton, who passed for 262 yards in his second game back after he was benched for three games. "Obviously, it didn’t turn out how we thought it would, but it was the right call. Unfortunately, they played it well and we weren’t able to get in.”

Dalton bemoaned other chances the Bengals let slip away.

“That was the deciding factor in this game for sure,” Dalton said. "There have been some struggles this year, but it’s hard to say there is one reason why. A couple of times I took a sack when I was down there that set us back in long goal-to-go situations, and that hurt us.”

It also hurt that the Bengals had a late interception wiped out by an interference call.

With five minutes to go and the Browns up 24-16, Bengals cornerback William Jackson III got his hand on a pass intended for Odell Beckham Jr. and the tip was caught by safety Jessie Bates III, who intercepted Baker Mayfield in the first half.

Cincinnati appeared to be in business at Cleveland's 16, but Browns coach Freddie Kitchens challenged and Jackson was called for interference, giving the ball back to the Browns.

“I'm not going to talk about the call,” he said. "But anytime you get a big play taken away as a team it sucks.”

The Bengals felt they deserved better, and now must regroup quickly with the New England Patriots coming to down next week.

They'll get another shot at the Browns.

"I felt we had the game won since the moment we stepped on the field," said wide receiver Tyler Boyd. “I felt like they couldn’t stop us the whole first half. The second half slowed down but we were still able to move the chains and the ball. I thought we didn’t make those plays when we needed to, in the big times.”