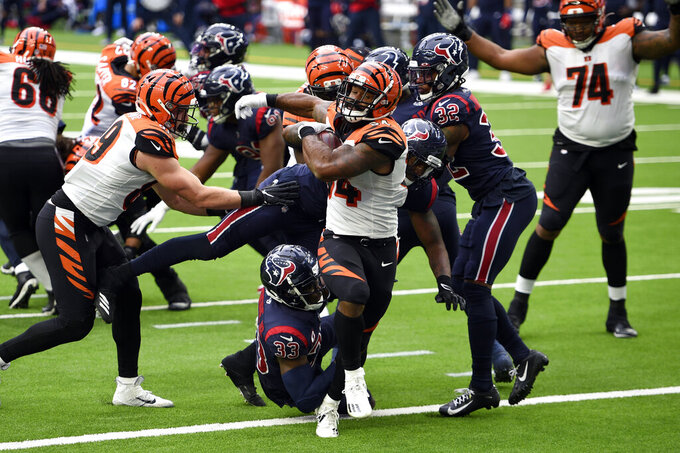 Cincinnati Bengals running back Samaje Perine (34) runs for a touchdown as Houston Texans' A.J. Moore Jr. (33) and Zach Cunningham try to tackle him during the second half of an NFL football game Sunday, Dec. 27, 2020, in Houston. (AP Photo/Eric Christian Smith)

The Bengals waited until the very end of 2020 to finally go on a winning streak.

Six days after surprising the Pittsburgh Steelers at home on "Monday Night Football," the Bengals outlasted the Houston Texans 37-31 on Sunday. It was their first road win since Week 4 of the 2018 season and the first of coach Zac Taylor’s two years in charge.

“Man, it’s crazy to even think about,” wide receiver Alex Erickson said of ending the road drought. "This league’s tough and it’s hard to win on the road. To go two years, though, man, a long time coming. It’s just a testament to sticking to the process and believing. I know it’s hard sometimes when you lose that many road games in a row you never think it’s going to happen and you just keep believing.

“And I think on Monday night the energy was great and guys really believed, and now you see the momentum picking up. We’re playing the right way and we’re starting to get some momentum that we’ve earned, and so it feels really good to come down here and get a victory.”

Ending a long losing streak to the rival Steelers gave the Bengals some confidence going into the game against the Texans.

“I think winning, it’s contagious, right? You get on a roll, you feel that momentum and guys start believing. And it’s just a testament to staying with it,” Erickson said.

Despite another last-place finish, Taylor was pleased with the effort in the penultimate game of the season.

“And like I told them, we practiced in 10-degree weather on Christmas Day to come down and play a game in Houston," Taylor said. ”And not one guy, I didn’t hear one guy complain about it; they all knew that we had to get some work done before we were going to come down and win this big game, and just couldn’t be prouder of the work that they put in here in Week 16. We’re out of the playoff hunt. It’s easy for guys to check out right now and we haven’t had a single player do it.”

For a team that couldn't find a way to win a handful of close games early in the season, the past week has been a welcome change.

“There have been a few games where we’re literally one play away from being a win,” quarterback Brandon Allen said. "Those are tough, but you have to be able to move on and approach the next week like you’re going to win it again. I think you can just see in these last two weeks that this team knows how close it can be, and we’ve finally been able to have two real close games and we put them together to get wins, and we can just take that momentum and move it forward.”

In both victories, the defense got key stops in the final minutes. On Sunday, it was Sam Hubbard who sacked Deshaun Watson. Watson's fumble was recovered by Margus Hunt and the team added a field goal for the six-point win.

“They played really well in the first half and then obviously the third quarter and early fourth quarter didn’t go the way they wanted,” Taylor said of the defense which gave up 488 yards overall and 324 yards passing and three touchdowns to Watson.

“But we just needed them to make one stop there. And they did a great job. Sam got to the quarterback and I think Margus recovered that ball. That was a huge moment in the game for us.”

Plenty of losing teams pick up wins at the end of the season. Usually it doesn't carry over to the next year. The Bengals (4-10-1) hope to build on their recent success.

“I think that when you finish the season strong and you do things the right way, you’ve got that leadership and that culture established, you’ve just got to take it and build on it and just run with it,” Hubbard said.

The offense. Despite missing several key starters to injuries, including Joe Burrow, Joe Mixon and Tyler Boyd, the Bengals gained 540 yards and scored a season-high 37 points.

The run defense. Against a below-average rushing offense, the Bengals allowed 166 yards on 17 carries, including 12 carries for 128 yards and a touchdown to David Johnson.

Brandon Allen. The Bengals’ backup QB was 29 for 37 for 371 yards and two touchdowns.

Draft positioning. By winning two in a row, the Bengals dropped from the No. 3 spot and are now No. 5 and could slide further depending on what happens in Week 17.

Cornerback William Jackson left the game with a concussion in the second quarter.

Close out the regular season at home against Baltimore on Sunday. The Ravens are in contention for a wild-card berth.

By Rob Maaddi an hour ago
By Cliff Brunt 5 hrs ago
By Juan A. Lozano 12 hrs ago
16 hrs ago
By Arnie Stapleton 24 hrs ago