Bengals get O-line help, pick Carman in second round 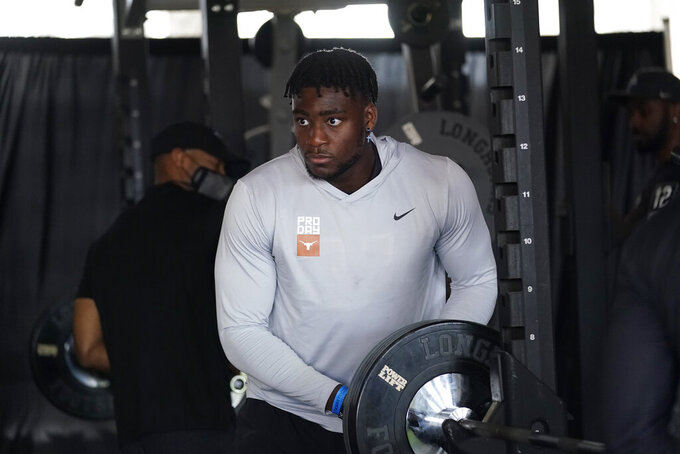 FILE - In this March 11, 2021, file photo, Texas linebacker Joseph Ossai prepares to lift weights for scouts and coached during the school's Pro Day in Austin, Texas. Ossai was Ossai was the third round pick by the Cincinnati Bengals in the NFL football draft. (AP Photo/Eric Gay, File)

CINCINNATI (AP) — The Cincinnati Bengals got some help for their offensive line Friday night, taking Clemson tackle Jackson Carman with their second-round pick in the NFL draft.

The Bengals got the 6-foot-5, 335-pound Cincinnati-area native with the 46th pick after trading the 38th to the New England Patriots. Cincinnati got two more picks in the trade, the 122nd and 139th.

Cincinnati then used the sixth pick in the third round to get a pass-rushing specialist in Texas linebacker/defensive end Joseph Ossai.

After making a splash by taking star LSU receiver Ja'Marr Chase in the first round, the Bengals turned in the second to one of their greatest areas of concern — protecting second-year quarterback Joe Burrow.

Carman, who at left tackle protected the blind side of college football’s most valuable quarterback, Trevor Lawrence, likely will be shifted to guard and be expected to play a lot right away.

“He's a big physical lineman that's got good nimble feet and gives us really good position flex at both guard and tackle,” Cincinnati offensive line coach Frank Pollack said. “He's going to come in and compete for a starting spot at guard, and at tackle in the future if and when needed.”

“I could not picture a better scenario,” Carman said. “This is crazy, just thinking where life is a journey and where the game of football is taking your life and returning back to my family.”

A red flag was Carman's health. He played the last five games of the 2020 season with a herniated disk in his back and had surgery Jan. 19. He said he's recovering well.

The Bengals — 4-11-1 in 2020 — gave up the third-most sacks in the NFL and lost Burrow, the top overall pick in the 2020 draft, to a season-ending knee injury in a Week 11 loss to Washington when the pocket collapsed on him.

“That's what I do,” Carman said. “I blocked for the No. 1 pick this year, so it's the same thing — coming in and doing my job at the highest level. It's a blessing to be able to protect Joe Burrow. It's even crazier knowing I was just playing against him two years ago. So it's really an amazing, full-circle experience."

The Bengals line should be improved. They already signed free agent tackle Riley Reiff, a former Viking, and hope young tackle Jonah Williams, a first-round pick in 2020, can stay healthy after missing the final six games of the season with a knee injury.

After trading down Friday, the Bengals watched three good offensive tackle prospects taken off the board — Oklahoma State's Teven Jenkins, Notre Dame's Liam Eichenberg and Walker Little of Stanford — before they picked Carman.

“We felt like there was going to be some good options there, just moving back eight spots,” coach Zac Taylor said. “We got some ammunition for later in the draft. Really, even in hindsight, we're feeling really good about our decision. We got a guy we were really high on."

Taylor said he was impressed with the way Carman conducted himself in the talks they've had.

“There's a lot of things we like about this guy," Taylor said. "He can anchor, pass protect, he gets great movement in the run game. He's really a good athlete. He has high, high football intelligence. Just talking to this kid over Zoom the last couple of weeks, it's really impressive how quickly he'll walk in and be able to understand the schemes that we're going to employ.”

In Ossai, the Bengals filled another need by getting a relentless edge rusher. With an injury-depleted defensive front in 2020, they were last in the NFL with 17 sacks.

Ossai played four fewer games in his junior season in 2020 than his sophomore season but still set career highs in sacks (5.5), tackles for loss (15.5), and forced fumbles (three).

“You look at the guy and he jumps off the tape,” defensive coordinator Lou Anarumo said. “He's explosive, he has great length to him, he brings some position flex. He plays the game the right way, plays extremely hard. Just excited about what he brings to the table.”