Bengals get shot of confidence in stunning win over Steelers 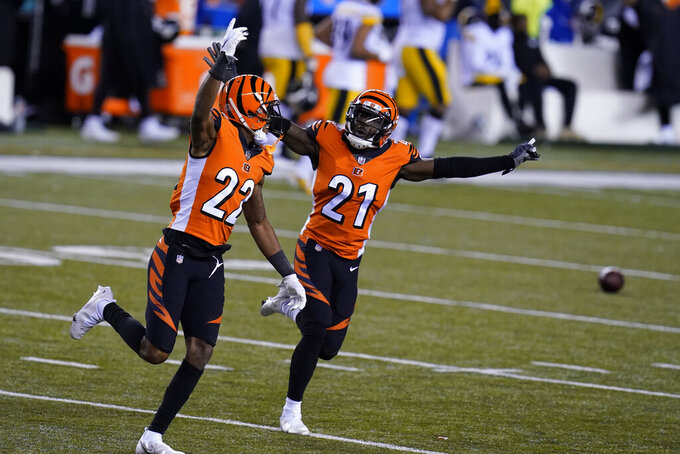 Cincinnati Bengals' William Jackson (22) and Mackensie Alexander (21) celebrate after Pittsburgh Steelers turned the ball over on downs during the second half of an NFL football game, Monday, Dec. 21, 2020, in Cincinnati. (AP Photo/Michael Conroy)

CINCINNATI (AP) — Few saw what the Cincinnati Bengals were capable of Monday night, least of all the playoff-bound Pittsburgh Steelers.

The Bengals got their third win of the season, this one on a primetime stage against a hated divisional rival that was looking to stop a two-game skid and get back on track before the postseason.

Before kickoff, it looked to be a snoozer and another inevitable setback in another disappointing season for Cincinnati.

Taking advantage of the sloppy, inept Steelers offense, Cincinnati forced turnovers and built a 17-point first-half lead on the way to a stunning 27-17 win.

It was a feel-good night for the Bengals in what has been a another disappointing season dragged down by multiple injuries to key players. The biggest was rookie quarterback Joe Burrow, who was lost to a season-ending knee injury on Nov. 22.

The Steelers outgained the Bengals overall 244-230, but the turnovers were the difference.

“It's tough because we all have these expectations and they haven’t gone the way we wanted,” said running back Giovani Bernard, who ran for a touchdown and caught a pass for another scor e. “When we have a game like this it means so much to the players, the coaches. You see the guys that continue to put in the work every single day.

"Quite frankly it’s not easy to come in here after a close loss two, three, four five weeks in a row, whatever it may be. It’s not easy for coaches to keep encouraging us, but they continue to and I’m thankful.”

The Bengals' defense has been decent for much of the season as the offense struggled. The unit was outstanding on Monday night, with safety Vonn Bell forcing a fumble with a hard hit on Juju Smith-Schuster after a reception, and cornerback Mackensie Alexander picking off Ben Roethlisberger. They held the Steelers (11-3) to 86 rushing yards and allowed just 4 third-down conversions on 16 tries.

The Bengals' passing game has suffered since Burrow went down with an injury. Brandon Allen started the previous three games, but was out Monday with a knee injury from last week's loss to the Cowboys. Ryan Finley started for the first time since the 2019 season and was 7 for 13 for 89 yards as the Bengals stuck to a ground attack.

The unimpressive passing numbers aside, Finley threw a touchdown pass to Bernard and made the offensive play of the game. With the Bengals' lead cut to 7 points, Finley ran untouched around the left side for a 23-yard touchdown to push it to 24-10 with 11:21 left in the game.

Kicker Randy Bullock was a healthy scratch again as the Bengals gave Austin Seibert a try. Seibert was 2 for 3 on field goals, including a 34-yarder in the first quarter and a 33-yarder with 12 seconds left that put an exclamation point on the Cincinnati win. He also made all three of his extra-point attempts.

Tyler Boyd, the Bengals' leading receiver, left the game with a concussion in the first quarter and was ruled out.

3 — Number of Bengals wins, which is one more than last season when they finished 2-14.

Build on the win and get Finley ready to play the Texans two days after Christmas and then the Ravens on Jan. 3. Another win could help convince the organization to stick with coach Zac Taylor for another year.