Bengals grind out a win, but road to playoffs will be rocky 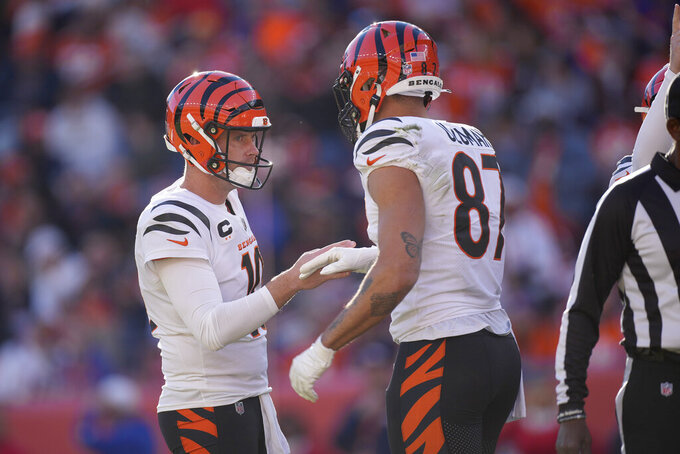 CINCINNATI (AP) — The Cincinnati Bengals had to grind and scrape and outlast the Denver Broncos to stay in the playoff race.

The Bengals (8-6) scored just one touchdown, a 56-yard catch and run by Tyler Boyd in the third quarter to put them up 15-10. That would stand as the final, with Cincinnati snapping a two-game losing streak.

“We’ve had a lot of nail-biters in the past and previous games, but we have a solid team all around,” Boyd said.

The defense kept the Broncos in check, holding them without a touchdown until backup Drew Lock threw a scoring pass to Tim Patrick after Teddy Bridgewater left on a stretcher in the third quarter because of a head injury.

The key play was Khalid Kareem snatching the ball away from Lock on second-and-goal from the Cincinnati 9 in the fourth quarter that ended a potential Denver scoring drive.

The game might prove to be costly for the Bengals in terms of injuries. They came in already missing their best linebacker, Logan Wilson, and starting right guard Riley Reiff. More guys were banged up Sunday.

The defense without Wilson and cornerback Chidobe Awuzie applied pressure on the quarterbacks and didn't break when it counted. The unit shut down Denver on a final drive after it got the ball back with just over a minute remaining in the game. Earlier in the fourth quarter, Kareem closed in on Lock and snatched the ball away with the Broncos deep in Bengals territory and driving for what could have been a go-ahead TD.

“It allows us to play a pretty dirty game,” coach Zac Taylor said of the gritty defensive performance.

The offense behind Joe Burrow started slow — again — and big plays were scarce. Burrow was just 15 for 22 for 157 yards. Joe Mixon managed just 58 rushing yards on 17 carries and was slowed by an ankle injury. Three field goals by rookie Evan McPherson saved the day.

Boyd was the key receiver for Burrow on a day when Tee Higgins and Ja'Marr Chase combined for just three catches and 26 yards. Boyd had his best game since Sept. 30, grabbing five passes for 96 yards and Cincinnati's only TD. Boyd also caught a critical 19-yard pass to set up a last-second field goal just before halftime. Linebacker Germaine Pratt had 15 tackles.

The rookie Chase already has more than 1,000 receiving yards and 10 touchdowns, but had his quietest game of the season. He caught one of four targets for just 3 yards.

It's a familiar refrain, but Cincinnati has to start faster and better. Beyond that, winning two of the last three might be good enough to get the Bengals to the playoffs. The playoff picture is still muddled. The Bengals play AFC North rival Baltimore (8-6) in Cincinnati the day after Christmas, then host Kansas City before finishing the season at Cleveland.

“We still got two more division games left that are really going to decide the fate of the division,” Burrow said. "We know what kind of team Baltimore is.”