Bengals keep getting uglier in another season to forget 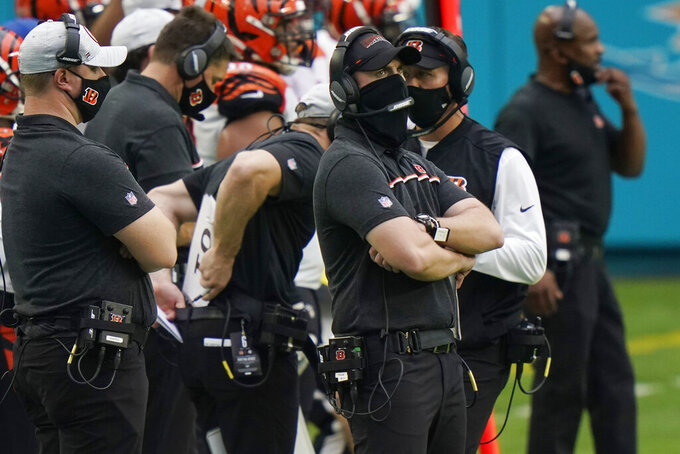 COLUMBUS, Ohio (AP) — The Cincinnati Bengals keep following the same script week after frustrating week: Generate a touchdown early, maybe grab the lead, and then watch it fade away in an ugly second half.

Cincinnati was true to form in Sunday's 19-7 loss to the Dolphins that got increasingly worse as the game progressed. After Tyler Boyd caught a short pass and turned it into a 72-yard touchdown in the first quarter, the offense folded.

The Bengals totaled 30 yards in five second-half drives — and 22 yards of it came on one pass.

Many injuries, locker room dissension and inconsistent performances have dragged down the Bengals (2-9-1), and the result is another unsightly season to forget. The biggest blow was losing rookie quarterback Joe Burrow to a season-ending knee injury on Nov. 22. Practice squad quarterback Brandon Allen got thrown into the fire, and he hasn't been good.

Take away the Boyd touchdown pass Sunday and Allen threw for 81 yards and an interception. He was sacked five times by the Dolphins, getting the wind knocked out of him on the last one and leaving the game in the fourth quarter. He gave way to Ryan Finley, who was sacked twice and threw an interception.

The Bengals have lost four straight and have gone 20 games without winning on the road, going back to 2018.

The Bengals' defense limited Miami to six first-half points and has allowed opponents 19 points in each of the past two games. That should be good enough to win most weeks for most teams.

“These haven't had to be 30, 40 scoring efforts to win these games,” Taylor said. “These have been kind of a race to 20 and we haven't done a good enough job on offense, the last three weeks particularly.”

Most everything. The running game continues to be absent. Giovani Bernard, subbing for the injured Joe Mixon, had 12 carries for 30 yards. The offensive line and the new QB are still adjusting to each other, and sometimes they all just look confused. The Bengals have been notoriously bad in the third quarter.

Safety Jessie Bates III had a career-high 13 tackles and was one of the few bright spots Sunday.

Mike Thomas, a gunner on the punt team, was penalized twice for hitting Miami’s returner Jakeem Grant way early. The second time he drilled Grant, in the fourth quarter, the Dolphins on the sideline took offense and the subsequent bench-clearing brouhaha ended 20 minutes later with three ejections. It made an ugly game even uglier.

“Mike was just trying to play fast. He wasn't trying to injure anybody,” Taylor said.

OT Jonah Williams was carted off with a knee injury; Allen got hit in the chest but said he was OK after getting his breath back; WR Tee Higgins said he tweaked a hamstring trying to jump over a defender; CB Mackensie Alexander left the game with a possible concussion and didn't return.

Minus-4 — Net yards gained by the Bengals in the third quarter Sunday.

Try to play these last four games without getting anybody else seriously hurt. The Bengals host Dallas on Sunday and then play Pittsburgh, Houston and Baltimore. A win in one of them would at least give them more than the two of last season.