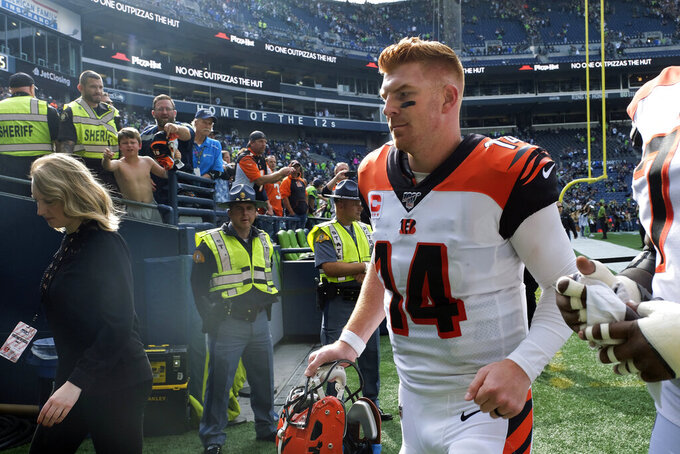 CINCINNATI (AP) — Andy Dalton had a career day. The defense played far better than at any time last season. An opener that could have turned ugly became a point of optimism.

The Bengals couldn't pull off the upset in Seattle, but the way they played suggested that this could be a much different team under first-year coach Zac Taylor.

A 21-20 loss to the Seahawks left Cincinnati disappointed but not discouraged. In fact, the Bengals came away feeling pretty good, all things considered.

"The first full game as a team, really, with these systems in place, these players in the building — there's some unknowns that come with that," Taylor said Monday. "We expected to win that game and feel we should have won that game, but I think our guys now know we're as good as we think we can be.

"We can't make the same mistakes we just did, but we're a football team that's poised to do some really good things if we continue to make the improvements we need to make."

One of the biggest questions in Seattle was how Dalton would look his first time running Taylor's full offense. The Bengals threw a lot of screen passes to negate the Seahawks' pass rush, and Dalton took advantage of a defense that sometimes conceded short throws — a "rope-a-dope" approach, as Seahawks coach Pete Carroll put it.

Dalton had a career-high 35 completions in 51 attempts, three shy of his career high. He finished with a career-best 418 yards with two touchdowns , no interceptions and five sacks. He also fumbled twice.

In his first time in the new offense, Dalton was a very good fit.

"We were encouraged by everything we did," Dalton said .

The run game. Cincinnati was able to throw for so many yards in part because Seattle stacked the line of scrimmage to stop Joe Mixon and Giovani Bernard, and it worked. They combined for only 13 carries and 31 yards. Mixon left with a sprained ankle. It's unclear whether he'll be available next Sunday against San Francisco.

Sam Hubbard had a career-high 10 tackles and two sacks , matching his career high. The second-year end anchored a line that limited Seattle to 233 yards and 72 yards rushing. The Seahawks managed only 12 first downs and had the ball for 11 minutes less than the Bengals. It all started with the line.

"Those guys really gave us a great chance to make plays on the back end," cornerback Dre Kirkpatrick said. "If they keep that up, there's going to be a lot of chances for turnovers."

Randy Bullock made a pair of field goals, but was wide left on a 45-yard attempt in the third quarter that could have made it 20-14. It was one of several missed opportunities that could have swung the game. Dalton fumbled on Cincinnati's opening possession of the second half, the wet ball slipping out of his hand as he got ready to throw a screen pass on a play from the Seattle 12-yard line. Those two missed chances prevented Cincinnati from taking control.

Mixon got his left ankle twisted on a run early in the third quarter and didn't return. Taylor said Monday that the injury is only a sprain and Mixon is day to day, which was encouraging news. Mixon led the AFC in rushing last season with 1,168 yards.

The Bengals averaged 50,753 fans for their home games last season, the second-lowest mark in the NFL. It'll be interesting to see whether the solid overall showing in Seattle helps sell more tickets for their home opener Sunday against the 49ers.

Win a game. The Bengals had several chances to pull off the big upset on the road, but missed their chances to take control in the second half and let it slip away.