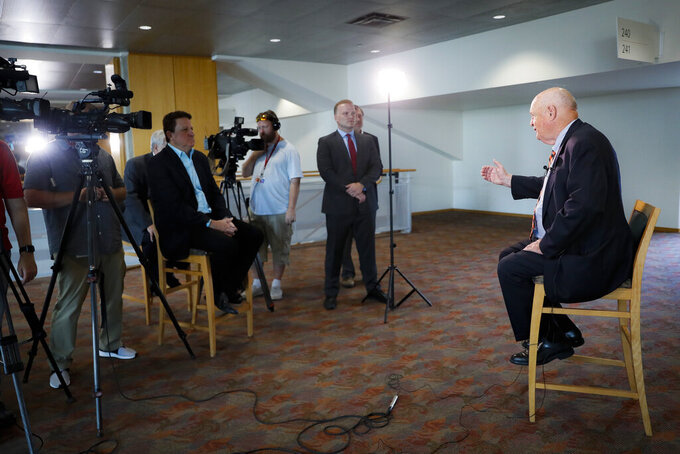 CINCINNATI (AP) — Bengals owner Mike Brown thinks the NFL's current 16-game schedule for the regular season is long enough, and he doubts that the league will be able to shorten the preseason and add games that count in the standings because of the players' opposition.

Brown said Tuesday that he strongly opposes a suggestion to have an 18-game regular season and allow teams to rest players for two of the games. He can't envision playing the Steelers, for instance, with a healthy Ben Roethlisberger sitting out.

Brown thinks that players' safety concerns over adding games will likely keep the regular season in its current format.

Commissioner Roger Goodell reiterated last month that he wants to reduce the number of preseason games. The length of the season is one topic of preliminary talks between the league and the players' association over a new collective bargaining agreement. The current one expires after the 2020 season.

One proposal would eliminate two preseason games and add two in the regular season. To avoid putting a more physical toll on players, they would get two regular games off.

"Different owners have different thoughts and they're welcome to express them, to argue them," Brown said. "I just don't think we want to play Boston unless (Tom) Brady isn't playing.

"Everyone knows the discussion on this. It isn't the way football has been played. Baseball is played that way, different pitchers and all. In our game, you get the best team out there, and I think that's the way it ought to be."

The discussion is driven by dissatisfaction with regulars held out for most of the preseason. They typically play only a small portion of two games and sit out the final one entirely.

Brown said owners allowed the preseason games to evolve into exhibitions with little, if any, playing time for starters because coaches didn't want to risk injuries.

"I don't blame coaches for doing that, they were protecting their interest, their players," Brown said. "They didn't want them exposed, they didn't want them injured, but it impacted the product and we didn't step up and handle it as owners. We accepted it, and I think it got us to where we are today."

The Bengals drew 35,633 and 39,520 fans for their two home preseason games last year, when they had a third straight losing season and a third straight significant decline in attendance. Cincinnati averaged only 50,753 fans in the regular season, the second-lowest in the league.

The plummeting fan interest was a factor in Brown firing Marvin Lewis after his 16th season as head coach and hiring Zac Taylor . Lewis went 0-7 in the playoffs, extending the Bengals' mark of no postseason victory since the 1990 season.

Brown pointed out that the Bengals made the playoffs from 2011-15, a franchise record, but lost in the first round all five times to extend their streak of futility. They've gone 6-9-1, 7-9 and 6-10 the last three years, falling to last in the AFC North .

"That's an eternity in this business," Brown said. "That's what people remember. We want to re-excite our fan base."