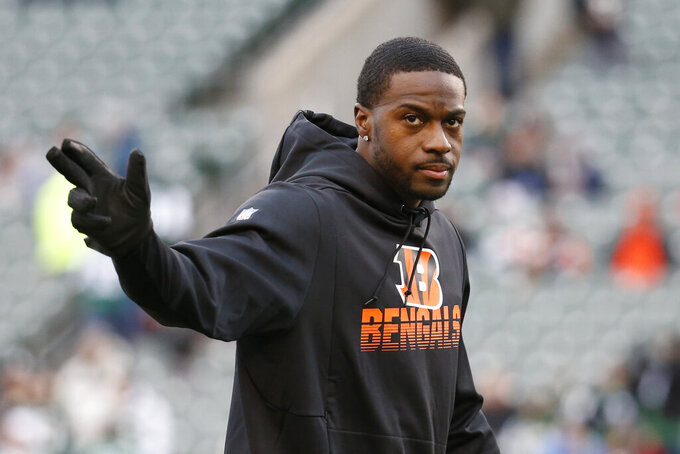 FILE - In this Dec. 1, 2019, file photo, Cincinnati Bengals wide receiver A.J. Green practices before an NFL football game against the New York Jets in Cincinnati. The Bengals used their franchise tag on A.J. Green, giving them time to try to work out a long-term deal with the star who is one of the most accomplished receivers in franchise history and would be a vital part of breaking in a new quarterback.(AP Photo/Frank Victores, File)

CINCINNATI (AP) — The Bengals released right guard John Miller on Wednesday, their latest move to overhaul an offensive line that's been a critical weakness the past two years.

The move came five days after the Bengals released left tackle Cordy Glenn, who missed 10 games last season with a concussion and a team suspension.

Miller signed as a free agent last year and started 13 games at right guard, part of a line that struggled to protect Andy Dalton and open holes for the running game. Cincinnati's offense has ranked at or near the bottom of the league each of the past three seasons.

Jonah Williams, the Bengals' top pick who missed all of last season with a shoulder injury, is expected to start at left tackle next season. The Bengals have the first overall pick in the draft and are expected to take Heisman Trophy winner Joe Burrow.

The Bengals also released B.W. Webb on Wednesday as part of a cornerback shuffle. They're expected to sign former Vikings cornerback Trae Waynes. Webb was one of Cincinnati's notable free agent acquisitions last year, getting a three-year deal. He was limited by an arm injury, started 12 games and had one interception.

The Bengals declined to confirm reports they've reached a tentative deal with former Texans nose tackle D.J. Reader, who would add depth to a line that struggled to get pressure on the quarterback the first half of last season.

Cincinnati's biggest free agency decision was settled — for now — when it used the franchise tag on receiver A.J. Green, giving the Bengals a few more months to continue negotiating on a multi-year deal. The seven-time Pro Bowler wants to stay if the Bengals are willing to pay him as an elite receiver.

Green has said he'll be disappointed if the Bengals keep him for only one more year with the franchise tag, and he will sit out voluntary offseason activities to avoid injury, which would hamper a new quarterback's development in the offense.