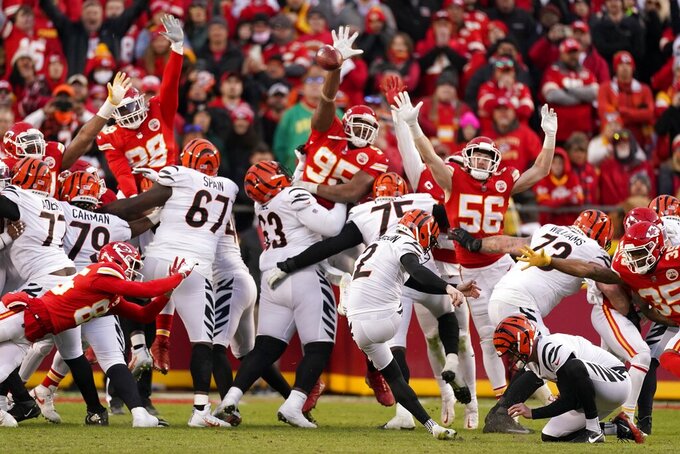 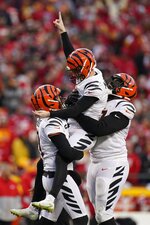 Joe Burrow knew Evan McPherson must be a special kicker if the Cincinnati Bengals were willing to spend a fifth-round pick on a position usually filled by undrafted players and journeyman.

But the Bengals targeted McPherson and made him the only kicker taken in the 2021 draft, a decision that has been validated by one of the NFL's greatest postseason kicking runs.

“Obviously kickers aren’t usually drafted that high, but I figured if we’re drafting a kicker, he’s going to be really good for us,” Burrow said this week. “Then I met Evan and you kind of know how a kicker is going to perform based on how he reacts and interacts with people in the locker room. All the kickers can kick it and put it through the uprights, but it’s really how you handle the intense situations that’s going to really make or break your reputation as a kicker.”

McPherson survived the friendly ribbing from his new teammates and dished it back himself, showing the Bengals he was ready for the NFL. But nothing has been more intense — and no performance has been better than McPherson has done so far in the playoffs.

He has been perfect on kicks through three games, making four field goals in each win and delivering walk-off kicks on the road the past two weeks to beat Tennessee and Kansas City and send Cincinnati to the Super Bowl.

“He’s been everything that we expected him to be and and then some,” special teams coach Darrin Simmons said. “But his mental makeup is fantastic. It’s exactly what you’re looking for in that position.”

McPherson's 12 field goals so far are two shy of Adam Vinatieri's record from the 2006 postseason and he already has as many four field-goal games in the playoffs as any player ever, tying the record Vinatieri set in his 24-year career.

McPherson's 12 field goals from at least 50 yards are the most in a single regular season and playoffs combined, and his three makes from long range in the playoffs are two shy of Vinatieri's record.

Longtime NFL kicker and CBS kicking analyst Jay Feely said the only postseason he would put ahead of McPherson's is what Vinatieri did in the 2001 season when he made “the greatest kick of all time,” a 45-yarder in the snow to force overtime against the Raiders. Vinatieri then made a 23-yarder to win that game, and a walk-off 48-yarder to beat the Rams in the Super Bowl.

But McPherson is doing this as a rookie under the bright playoff lights.

“A little bit of it is he doesn’t know what he doesn’t know,” Feely said. “So he’s just out there having fun. He hasn’t had the big misses. He did have the one game against Green Bay where he missed, but he was able to overcome that. That’s what defines great NFL kickers is their ability to overcome failure, to not allow it deter him. That’s the point this season where your entire rookie year could go off the rails and it could make you not be confident in yourself and your swing starts to change, especially when you’re a draft pick.”

McPherson missed three field goals in his first five games, including two in an OT loss to Green Bay in Week 5. He even memorably celebrated one of those misses as if he had made a game-winner.

But he has nailed 35 of 37 field goals since then, validating the scouting report Simmons got from his former kicker Shayne Graham, who coached McPherson in college at Florida.

“He talked to me a lot about what Evan’s makeup was and how confident he was without being cocky, and that’s an important differentiation to make,” Simmons said. “You want these guys to have short-term memory that if good or bad, that they live to perform in the next kick. The most important kick is not the last kick, it’s the next kick.”

The Bengals have marked McPherson's winning kicks the past two weeks with Tweets, saying “THAT’S WHY YOU DRAFT A KICKER!”

But Feely said he doesn't expect McPherson's success to lead to a run on kickers going in the draft. He said determining which kickers have the fortitude to succeed like McPherson and which ones will flame out like Tampa Bay 2016 second-round pick Roberto Aguayo is nearly impossible to know.

“I think it’s really hard to draft a kicker and be successful," Feely said. “I think it’s difficult for a personnel department to be able to look at a guy no matter where he played, no matter what level, and determine if he has the ability mentally and the mental makeup to come into the NFL to succeed.”