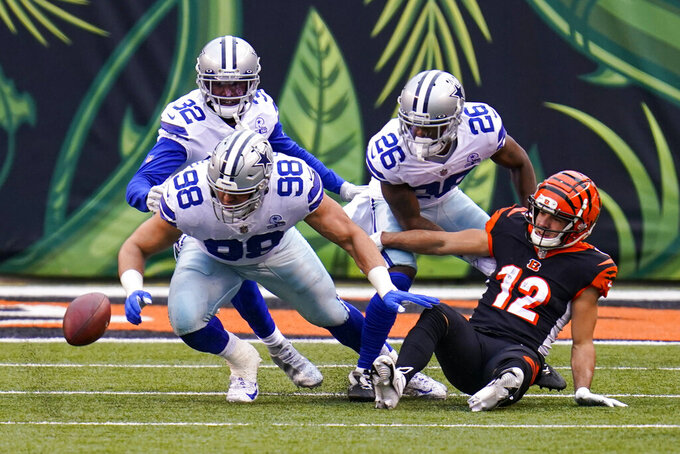 Cincinnati Bengals wide receiver Alex Erickson (12) fumbles the ball in the first half of an NFL football game against the Dallas Cowboys in Cincinnati, Sunday, Dec. 13, 2020. The Cowboys recovered. (AP Photo/Bryan Woolston)

COLUMBUS, Ohio (AP) — Possibly the best opportunity left for the Cincinnati Bengals to win another game this season came and went last Sunday.

The Dallas Cowboys came into Paul Brown Stadium at 3-9. Andy Dalton, a quarterback who was cast aside by the Bengals, was starting in place of the injured Dak Prescott. The Dallas defense struggles against the run. The chance for a feel-good victory at home was right there for the Bengals, but again they fumbled it away.

Cincinnati fumbled on each of its first three drives — one of them a scoop-and-score — leading to 17 first-half points by the Cowboys on the way to a 30-7 humiliation. Dalton rubbed it in their faces with a 7-yard touchdown toss with two minutes left and the game already in hand.

The Bengals (2-10-1) now look ahead to a Monday night game against Pittsburgh. The Steelers (11-2) have lost two straight and have playoff positioning to worry about, so they won't be overlooking the last-place Bengals.

On top of that, the Bengals will have to wait to see if their quarterback of the moment, Brandon Allen, will be fit to play after hurting his right knee late in the Dallas game.

Allen, who began the season on the practice squad, was promoted to starter after Joe Burrow — the Heisman Trophy winner and top overall draft pick — was lost for the season to a knee injury Nov. 22. The Bengals have lost all three games Allen has started.

If he can't go, then it will be another seldom-used backup, Ryan Finley, or even journeyman Kevin Hogan, who was signed to the practice squad two weeks ago.

After the Steelers, Cincinnati will finish against Houston and Baltimore. If the current run of futility continues, the Bengals will be stuck on two wins for the second straight season, this one marked by great hope to start, then bad luck, multiple injuries to key players, COVID-19 issues and close games that could have gone their way and didn't.

"It’s frustrating,” Taylor said. “It’s hard to get rid of this feeling that we feel at the end of every week.”

The Bengals' defense has made some strides. After holding three of four previous opponents to 20 or fewer points, Cincinnati allowed only 101 rushing yards to the Cowboys, held Dalton to 185 passing yards and sacked him twice. Dallas settled for field goals three times.

The offensive line has been a patchwork the entire season because of injuries, and the guys who have been in there are underperforming. The run game has been terrible since Joe Mixon was injured in October.

Veteran WR A.J. Green caught six of his seven targets for a team-leading 62 yards and his second touchdown of the season.

Kicker Randy Bullock, who had missed three of his past five field-goal attempts, was put on the inactive list so the Bengals could give Austin Seibert a shot. Seibert's only chance was a PAT, so he'll be the No. 1 guy again on Monday. Guard Michael Jordan also was a healthy scratch because of poor play.

Taylor said LB Logan Wilson has a foot injury and is day to day.

3.8 — Average rushing yards per carry for Cincinnati this season.

Come up with a plan for whichever quarterback is playing that will give the Bengals a chance to win a third game. That might at least make all this easier to swallow and earn Taylor a chance at another season with a healthy Burrow and Mixon.

“I mean, it gets harder every week,” defensive end Sam Hubbard acknowledged. “You know, you just got to come to work and keep trying, keep trying to turn this thing around and get a win. But after a while it gets harder and harder."