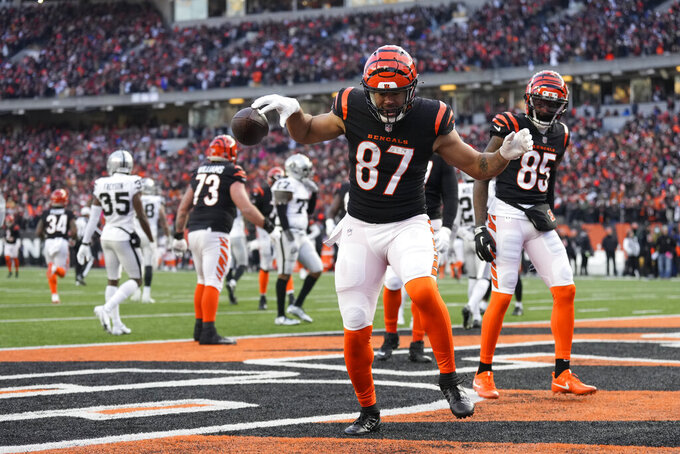 Cincinnati tight end C.J. Uzomah tried to send a message that he wouldn’t miss the Super Bowl by taking the brace off his left knee and tossing it behind him onto the Bengals’ logo during a pep rally.

His coach said Wednesday he’s optimistic about Uzomah’s progress even as the Bengals kept the tight end out of practice.

Zac Taylor says Uzomah likely will work at practice Thursday with the Bengals taking advantage of having three days of work left to see where the veteran is. Uzomah played only nine snaps in the AFC championship game before hurting his knee. He caught 49 passes for 493 yards and five touchdowns in the best season of his career, and he has 13 catches for 135 yards this postseason.

WHICH WAY THE WIND BLOWS

The Los Angeles Rams will be practicing Thursday at the Rose Bowl, a change made trying to anticipate winds predicted to blow 20 to 30 mph with gusts up to 45 mph.

“That’s the biggest inconvenience of playing the Super Bowl at home that we have to get on a bus,” Rams coach Sean McVay said. “We do that pretty regularly anyway going down to SoFi Stadium.”

The Rams’ practices are disrupted by high winds a few times each season during the fall and winter at their training complex, which is particularly susceptible to the problem because the practice fields sit at the base of a small hill in wind-swept Thousand Oaks with no large buildings or natural windbreaks around them.

The Los Angeles area also is under a heat advisory until Sunday night with temperatures expected up to 90 degrees. That’s a big difference in temperature for the Cincinnati Bengals, who had to work through a winter storm last week back in Ohio and a reason why the Bengals flew to Los Angeles on Tuesday.

Cincinnati coach Zac Taylor said the Bengals are hydrating as best they can and compared this to dealing with cold temperatures later in the season.

“What can you do?” Taylor said. “You go out there and you manage it the best you can as you practice through the week. We’re practicing in some pretty good heat right now. I think our guys will do a great job handling it.”

Isaiah Prince has no regrets about the difficult decision he made last season.

Opting out because of the coronavirus pandemic still wasn’t easy for the Cincinnati Bengals offensive tackle.

“Of course, I was very hurt,” Prince said. “I believe that was probably one of the most trying times in my life. Looking back at my career, I don’t think I’ve ever really missed a game, a practice — not in college.

“So for me, missing my first season (with the Bengals), that was kind of devastating for me.”

Prince was drafted by Miami in the sixth round in 2019 out of Ohio State and played in four games, including two starts, as a rookie. He was waived late that season and claimed by Cincinnati a day later.

The 6-foot-7, 305-pound offensive lineman was considered a potential depth piece to help protect then-rookie quarterback Joe Burrow. But the pandemic caused Prince to reassess things at home, and he decided to not play in his first year with the Bengals.

“Being at home while I opted out, just watching, I mean, I’m human,” he said. “There were times I was wondering, you know, how am I going to get back in? But I stayed faithful and kept believing in myself.”

Prince, whose Bengals teammate Josh Tupou also opted out, went back to school during the year away from football and finished his undergraduate degree at Ohio State. He used boxing to help him train and also worked out at LeCharles Bentley’s O-Line Performance facility in Arizona.

Prince returned to the Bengals this season, made the roster out of training camp and took over as the starting right tackle when Riley Reiff was lost for the season with an ankle injury in December. And now Prince is preparing to start in the Super Bowl.

“Those times definitely helped prepare me for this moment and staying focused regardless of what’s going on around me,” Prince said. “I think that was a very challenging time in my life, but I still had to wake up every day and stay focused on the things that really needed my attention. That definitely plays a key part in right now with everything that’s going on, is just staying focused and controlling what you can control.”

Carson Palmer is hopeful that the Bengals have enough to beat the Rams on Sunday.

Palmer was the top overall pick by the Bengals in 2003 and led the franchise to two AFC North titles in eight seasons. Cincinnati granted his trade request to the Raiders in 2011.

Palmer has been a longtime fan of Joe Burrow. Palmer’s brother, Jordan, worked with Burrow throughout the draft process in 2020 before the Bengals made him the top pick and gave him the same jersey number as Palmer’s.

“I love everything about him. He’s so level-headed,” Palmer said. “You can’t stop thinking about that playoff game (against Tennessee) where he got sacked nine times. It’s a demoralizing feeling getting sacked that many times. It takes a toll emotionally on you, but you never felt that watching him play. He was cool. He was calm.

“There’s a great belief and energy. And that magic. Hopefully there’s enough magic to get past this team of All-Pros and all stars.”

Palmer says the biggest key to the game will be for Burrow to get the ball out quickly to be able to beat the Rams’ pass rush.

“They’ve been so creative with moving (Ja’Marr) Chase around and finding ways to get him the ball,” Palmer said between appearances on Radio Row Wednesday. “Joe (Burrow) just can’t sit back there. He has to get the ball out of his hand so that Aaron (Donald) and Von (Miller) can’t go to work.”

Rams coach Sean McVay isn’t sure why his voice sounds so raspy even though he feels just fine.

“Hopefully, we’ll get this voice to come back,” McVay said when speaking to reporters.

He went to speak to some of his coaches Tuesday and the sound of his voice surprised even McVay. He says he wondered what had happened.

“I got the honey, I got all the remedies to get this voice back,” McVay said.

For a guy considered one of the best left tackles in NFL history, Anthony Munoz had excellent hands.

The nine-time All-Pro and first-ballot Hall of Famer had seven catches, including four touchdowns in his career with the Cincinnati Bengals. Munoz would love to see a big man score a touchdown in the Super Bowl because Hydroxycut is giving away $100,000 to a fan if an offensive or defensive lineman finds the end zone. It happened 13 times in the regular season.

“It’s good that they’re trying to recognize the big man, so hopefully one of our big men on the Bengals will score a touchdown and somebody can win a lot of money,” Munoz said on the AP Pro Football Podcast.

“Playing offense for Sam was so much fun,” Munoz said. “You never knew what to expect, but it was great, solid stuff, very innovative.”

Three-time Super Bowl champion and two-time Pro Bowl guard Mark Schlereth said he never scored a TD at any level of football in his career. He’s rooting for a jumbo-sized score Sunday.

“I have the joy of scoring as an offense, but never individually scoring,” Schlereth said. “As an offensive lineman, you don’t get that very often but to have 13 this year, it does happen. A hundred grand would be a nice, little treat.”

Hall of Fame Health is partnering with the Off the Field NFL Wives Association to promote health care services for former players and families.

Hall of Fame Heath was launched two years ago during Super Bowl week in Miami to bring world-class health care solutions and services to the football community. Wednesday’s announcement increases the focus to wives, children and family members of former players.

“This may be the most important relationship we will ever form,” said Jeremy Hogue, CEO of Hall of Fame Health. “These are strong women, and like most women across the country, they typically make the decisions regarding health care in their homes. They ensure their husbands get the care they need and their kids get the care they need.”

The Off the Field NFL Wives Association was founded 16 years ago.