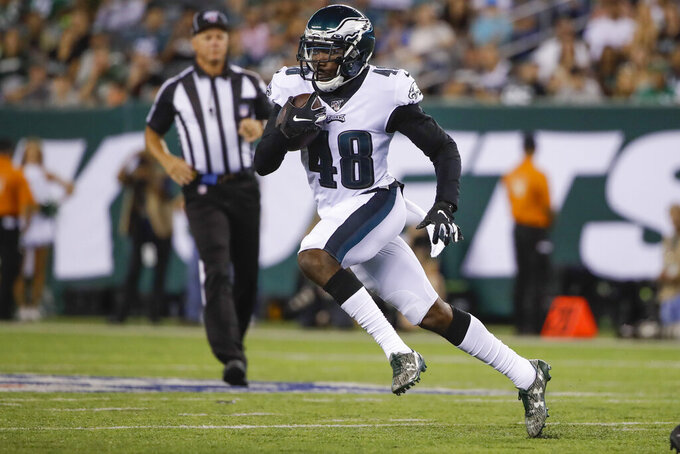 Philadelphia Eagles' Josh Hawkins (48) runs back an interception during the second half of a preseason NFL football game against the New York Jets, Thursday, Aug. 29, 2019, in East Rutherford, N.J. (AP Photo/Matt Rourke)

EAST RUTHERFORD, N.J. (AP) — Taylor Bertolet had a chance to end the New York Jets' search for a kicker with a big night.

The job still appears up for grabs.

Bertolet kicked two field goals for the game's only scores, but missed three other attempts in his bid to make New York's roster as the Jets topped the Philadelphia Eagles 6-0 in a snoozer of a preseason finale Thursday night.

"I've got to do a better job," Bertolet said. "I know we had some long field goals that I'm capable of hitting. I hit those kicks nearly every single day in practice."

Bertolet was cut last summer by the Jets (2-2), who opted to go with Jason Myers — who made the Pro Bowl. He was back in camp with New York this summer after replacing Chandler Catanzaro, who abruptly retired after the first preseason game.

Bertolet missed two extra-point tries in his first preseason game against Atlanta, but bounced back by making his two field-goal attempts and his only PAT against New Orleans last week.

But, in this one, Bertolet was wide right on a 53-yard field-goal attempt early in the first quarter before making a 23-yarder early in the second. Marcus Cooper's interception of Eagles rookie Clayton Thorson helped set up the scoring drive.

Bertolet was wide left on a 56-yarder just before halftime. His 39-yarder gave the Jets a 6-0 lead with 5:10 left in the third quarter. Bertolet then missed a 49-yarder with 9:40 remaining.

Coach Adam Gase insisted his confidence in Bertolet remains "good" despite the shaky summer, and offered a reason for some of the misses against the Eagles (1-3).

"Two of those, I just saw guys running out late," Gase said. "You just can't do that to the kicker. You can't bust his rhythm like that."

When asked if he would be OK if Bertolet was his kicker for Week 1, Gase responded flatly: "Yep."

Eagles wide receiver DeSean Jackson injured a finger during practice earlier this week, but coach Doug Pederson didn't appear concerned that it could sideline the star for the start of the regular season.

Thorson, a fifth-rounder out of Northwestern, played the entire game for the Eagles. He finished 12 of 26 for just 84 yards and an interception.

"Things that he has done in practice and even in some of these games, it might not look like it because of the end result, but he's made a lot of progress this entire training camp," Pederson said. "My hat's off to him and how he's worked and how he's prepared."

Carson Wentz sat out again with the rest of Philadelphia's starters, while veterans Josh McCown and Cody Kessler didn't play.

Trevor Siemian started at quarterback for the Jets with Sam Darnold and New York's starters getting the night off. With the backup job wrapped up, Siemian went 5 of 5 for 37 yards in his only series before giving way to Luke Falk.

Falk finished 13 of 18 for 91 yards in five series, and outplayed Davis Webb during training camp and the preseason for the potential No. 3 job.

Webb played the entire second half and went 18 of 23 for 176 yards and was intercepted twice — by Josh Hawkins and Chris Worley.

"Those two plays are obviously really bad," said Webb, who threw four interceptions in the preseason. "But I had a lot of completions and ran the offense pretty efficiently, but again, you've got to get in the end zone and that's something I just did not do tonight."

Former Australian rugby league star Valentine Holmes, in camp with the Jets as a running back/wide receiver, had a busy second half.

He tied for the team lead with five receptions for 55 yards, and ran the ball five times for no yards. Holmes also had a tackle on Worley's interception.

The 24-year-old Holmes is with the Jets as part of the NFL's International Player Pathway program. If he doesn't make the Jets' 53-man roster, he's eligible for a practice squad exemption — meaning he wouldn't count against the team's allotment of 10 non-active roster players during the regular season.

Philadelphia was driving down the field on its second possession behind runs of 15 yards by Greg Ward and 18 by Wendall Smallwood that got the Eagles down to the Jets 24.

But rookie Blake Cashman popped the ball out of Smallwood's hands on second-and-8 from the 22 and Frankie Luvu recovered and returned it 24 yards. It ended what turned out to be the Eagles' best scoring chance of the night.

Eagles: DT Aziz Shittu was being evaluated for a head injury after being hurt early in the second half.

Jets: S Brandon Bryant was waived before the game. He suffered a concussion during the team's preseason game against Atlanta last Saturday night. ... CB Mark Myers was being evaluated for a head injury. ... WR Charone Peake injured a hamstring.

Eagles: Open season at home vs. Washington on Sept. 8.

Jets: Open season at home vs. Buffalo on Sept. 8.