Bet the over? Chiefs, Washington face off with bad defenses 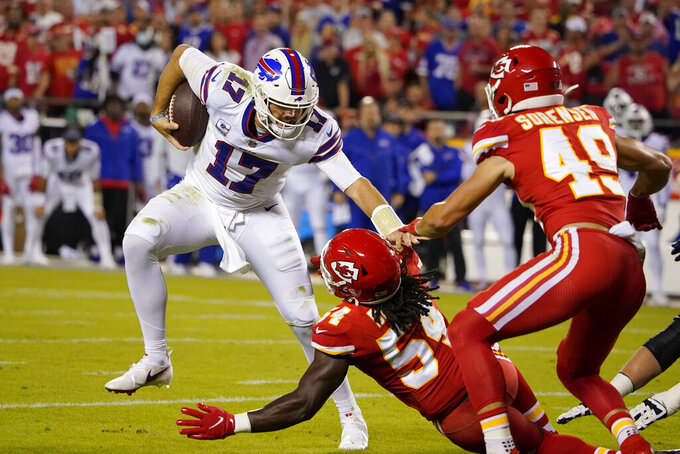 LANDOVER, Md. (AP) — All Jonathan Allen does not mince words about Washington's defense failing to live up to expectations.

“The defense has been absolutely horrible this year,” he said.

Kansas City's has not been much better. The Chiefs are the only team to allow more points than Washington this season, each defense is among the worst in the NFL and the teams face off each at 2-3 this weekend for what could be a touchdown-filled shootout.

The oddsmakers certainly think so. The over/under points total of 55½ is the highest of any Week 6 matchup, according to FanDuel Sportsbook, which opened with Kansas City favored by 6½.

If only the Chiefs and Washington weren't so turnover prone. Kansas City is tied for the most giveaways in the league with 11 after two fumbles and two interceptions last week in a loss to Buffalo, and Washington has turned the ball over seven times.

If defenders were feeling the pressure heading into the weekend, they're sure not showing it.

Practice? Practice? Kansas City has allowed 30-plus points every game this season.

Washington hasn't fared much better, giving up 33, 30 and 43 points the past three weeks. Now that unit has to face Patrick Mahomes with the Chiefs quarterback eager to atone for his recent mistakes.

“I got to make sure I’m firm with my fundamentals,” Mahomes said. "It’s the same thing every year when you see me get a little off: You got to go back to the basics and make sure I perfect those things. I think everything else will kind of come along with it.”

Washington QB Taylor Heinicke was visibly angrier at practice this week after throwing two interceptions in a loss to New Orleans. The fun storyline of Heinicke going from taking college classes online to becoming an NFL starter is over, and he's taking his problems to heart.

“I’m still kind of pissed off about it,” Heinicke said. "I just use that as fuel to get better throughout the week. Some people use different methods, but I kind of hold it with me and use it as fuel. I’ve done that throughout my career.”

With a career at the opposite end of the spectrum, Heinicke is not trying to be Mahomes. When he was out of football and coaching kids, Heinicke often told them: “You’re not Mahomes. That’s something that he can do. We can’t.”

A little Mahomes magic might be on tap for this weekend — if he and the offense can tamp down on the turnovers.

“We’re moving the ball down the field at a high rate,” he said. “We’re executing. We’re not having a lot of three-and-outs. That’s what you want to do as an offense. But once you have turnovers happen, it kind of ruins everything. It takes that great offense we can be and knocks it down to a very average one.”

Facing Washington with Ron Rivera at the helm will be the fourth time in six games that Chiefs coach Andy Reid has faced a former assistant. The Chiefs beat Kevin Stefanski's Cleveland Browns in Week 1, a late fumble doomed them in a loss to John Harbaugh’s Baltimore Ravens and they were blown out by Sean McDermott’s Bills last weekend.

WHERE ARE THE FANS?

Washington ranks last in the league in attendance, filling up just 62.2% of FedEx Field through three home games. Rivera said it's on the team to fill the stands.

“We got to hold up our bargain to get them to come back,” he said. "The biggest thing is we got to win. That’s on me, that’s on us to get them back and get them behind us.”

There was an unusually high amount of smoke during Washington's pregame festivities last week. Wide receiver Terry McLaurin called it the “worst it's ever been” for him.

“Last game was a challenge,” McLaurin said. “I’m just making sure I don’t run into one of my teammates or one of the cheerleaders who are like right out there.”

Allen called it “ridiculous” and dangerous."

How does he get through it? “Pray to God.”