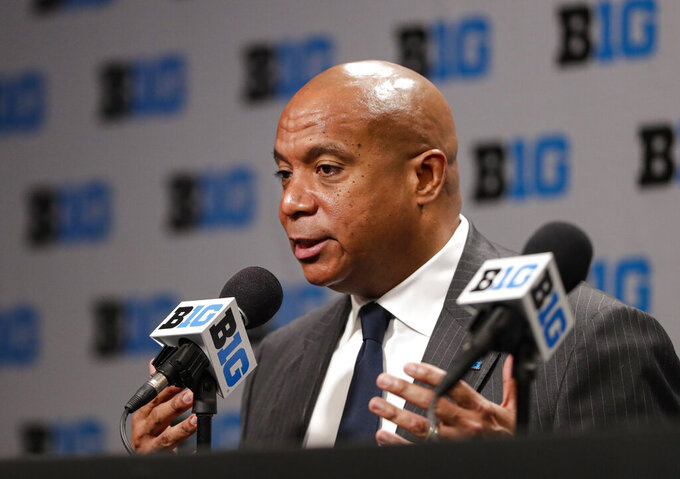 FILE - In this March 12, 2020, file photo, Big Ten Commissioner Kevin Warren addresses the media in Indianapolis after it was announced that the remainder of the Big Ten Conference men's basketball tournament had been canceled. Warren, the first black commissioner of a Power Five conference, is creating a coalition to give the league's athletes a platform to voice their concerns about racism. Warren announced Monday, June 1, 2020, the formation of the Big Ten Anti-Hate and Anti-Racism Coalition, with athletes, coaches, athletic director and university chancellors and presidents. (AP Photo/Michael Conroy, File)

The Big Ten's Kevin Warren, the first black commissioner of a Power Five conference, is creating a coalition to give the league's athletes a platform to voice their concerns about racism.

Warren announced Monday the formation of the Big Ten Anti-Hate and Anti-Racism Coalition, with athletes, coaches, athletic director and university chancellors and presidents.

Warren said the death of George Floyd in Minneapolis while being detained by police motivated him to take action beyond merely putting out a statement decrying racism.

“This has to stop. We have to build better relationships with law enforcement. They have to be trained better,” Warren told AP. “But it has to stop. And we just need to do what we can at every and any level to eliminate hate, to eliminate racism. We're going to take a stance on it in the Big Ten. I’m personally invested in this.”

Warren also said he and his wife, Greta, will be donating $100,000 to the National Lawyers Committee for Civil Rights.

It was one year ago Tuesday, that Warren, a former NFL executive with the Minnesota Vikings, was offered the job of Big Ten commissioner. He officially took over for former commissioner Jim Delany in January and has been dealing with crises in college sports ever since, starting with a pandemic that forced the cancellation of the NCAA basketball tournament and the rest of spring sports.

Schools are beginning to bring athletes back to campus for voluntary workouts. The NCAA gave the go-ahead for schools to start that process on on June 1, providing hope that football season will go on as scheduled.

“These next 30 to 40 days are going to be critical,” Warren said. “But I am very a positive person. I’m cautiously optimistic as fall as sports are concerned. But every single day, starting today in the month of June and the first part of July, will be will be critical for us to truly understand all the health and safety issues that will help us make a proper decision as we go into the fall."

While the Big 12, Pac-12 and Southeastern Conferences have set specific dates when those voluntary athletic activities can begin, the Big Ten — which spans from Rutgers in New Jersey to Nebraska — has left it up to each school to determine when is best to re-start.

“I trust our chancellors, our presidents and our athletic directors and our coaches and our student-athletes,” Warren said. "I trust our people on our campus that they’re going to do the right thing, that they will always put the health and wellness and safety of our student athletes front and center.”

Protests against police violence against minorities have swept across the country following Floyd's death. Warren said he felt a responsibility to 10,000 student athletes in the Big Ten to try to combat systemic racism.

“I may look back over my career, my entire career, and forming this coalition and the work that comes out of it could end up having the biggest impact on society than anything else I’ve ever done,” Warren said.